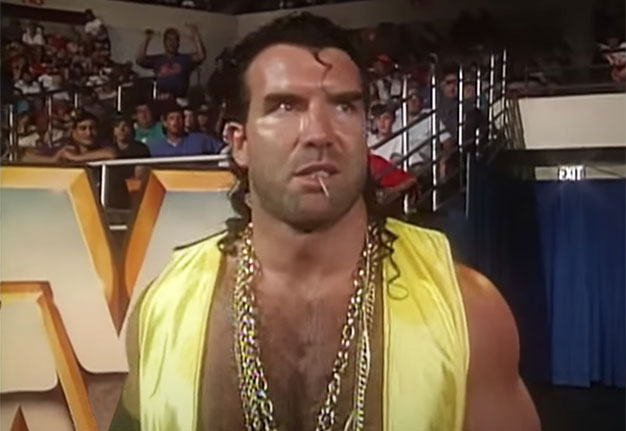 Scott Hall was a charismatic and talented wrestler whose search for success came to fruition after a decade of struggles. Sadly, his battles with personal demons would haunt him for decades. Hall would eventually overcome his battles with drugs and alcohol, but health problems would follow him for much of his career.

On January 15, 1983, Scott Hall found himself in a life-or-death situation when a patron at a gentlemen’s club he was working at pulled a handgun on Hall. The patron reportedly was arguing with Hall over a woman when the man smashed the windows of Hall’s car. Hall punched the patron, who pulled out a gun.

Hall wrestled with the man for control of the firearm but it went off, killing the man.

Hall faced second-degree murder charges but the case was dismissed due to a lack of evidence. However, the incident would take its toll on Hall for the next thirty years.

A Lifestyle He’d Grown Accustomed To

Hall’s dad was an Army veteran and Scott found himself constantly moving. However, the lifestyle agreed with Hall and the chance to make a living while constantly traveling was what drew him to professional wrestling.

Hall began training in the early 1980s, going to work for Championship Wrestling from Florida in 1984. There, Hall teamed with Dan Spivey as Starship Coyote and Starship Eagle, a short-lived tag team. The team worked as American Starship in Florida, Jim Crockett Promotions, and Central States Wrestling.

In 1985, Hall teamed with rising star Curt Hennig. Hall was christened “Magnum” Scott Hall due to his passing resemblance to the title character from the hit TV series, Magnum P.I. (wrestler Terry Allen had already adopted a similar gimmick as “Magnum” T.A. but as fans know, no good idea lasts long before it is ripped off). 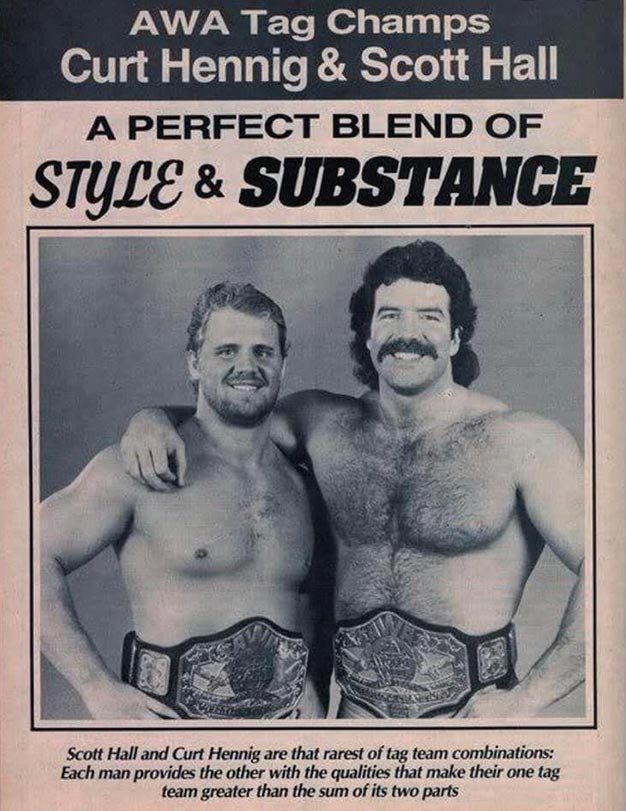 Hall had the size and charisma that allowed similar wrestlers to get over but something kept him from sustained success whether he worked in World Championship Wrestling (WCW), World Wrestling Council (WWC), or Catch Wrestling Association.

Hall worked in WCW as “The Diamond Studd” and later teamed with Kevin Nash (who was working as Vinnie Vegas). Hall left WCW, his quest for wrestling’s brass ring still eluding him.

Taking Control of His Future

Hall entered the WWF in 1992, with Vince McMahon sitting him down to go over his new character—a G.I. Joe-type persona. Apparently McMahon had learned that Hall’s father was an Army veteran and felt his son might follow in his footsteps—at least in the ring. In an interview with The Whig Standard’s Jan Murphy, Hall recalled:

“I said ‘Vince, if you want me to be G.I. Joe, I’ll be the best G.I. Joe I can be.’…I said ‘Did you ever see Scarface?’ He said ‘No.’ I went ‘Say hello to the bad guy.’ I just started doing that schtick and he loved it and he thought I was a genius. I’m ripping off the movie and he thinks I’m a genius. Of course I never corrected him about the genius part,” Hall quipped. “But that’s how it all came about.”

Considering Hall’s difficulties finding lasting success, is it any wonder he took a chance with something different?

In any event, Hall’s Scarface-esque character became Razor Ramon, a Cuban-American thug whose questionable English skills were only rivaled by his questionable adherence to the rules. Nonetheless, Hall got over with fans and transformed into a babyface.

In the WWF, Hall found the success that had eluded him before. “The Bad Guy” would win the Intercontinental Championship then defend it against Shawn Michaels at WrestleMania X’s famous Ladder Match, a match that cemented both men’s careers as future main eventers.

The Kliq wielded incredible political power, reportedly putting the brakes on rival wrestlers’ pushes. Hall and Shawn Michaels also were known for their partying excesses, with one anecdote having it that the two egged each other on to take the most pills without overdosing.

Scott Hall finally achieved lasting success in the WWF and while he never won the WWF Championship, he was a solid main eventer.

Tragically, Scott Hall’s past continued to trouble him as he continued abusing drugs and alcohol. More than one member of his family suffered from alcoholism, which has led to speculation that Hall might be genetically predisposed towards alcoholism. That, and the horrific killing Hall had witnessed has led to speculation that Hall was self-medicating himself for post-traumatic stress disorder. Indeed, Hall has said he should have sought counseling after the shooting.

In 1996, Scott Hall shocked the wrestling world when he and fellow WWF Superstar Kevin Nash jumped ship to arch-rival WCW. There, they (along with Hulk Hogan) formed the wildly successful faction, the New World Order.

Despite the group’s mega-success, Hall’s personal demons consumed him, eventually affecting his status in the company.

According to a report from Pro Wrestling Torch, Hall ran afoul of Time-Warner executive Brad Siegel (WCW was under the Time-Warner umbrella):

“Hall dated Siegel’s niece, Emily Sherman, WCW VP of international coordination… Hall and Sherman went out for a private dinner. According to sources, Sherman confronted Hall about his drinking problem at the dinner. According to the story, Hall stood up, threw his plate full of food on Sherman, stormed out of the restaurant and there was a confrontation between the two on the elevator shortly thereafter.”

Hall was released in 2000 and worked briefly in ECW and New Japan.

In 2002, Hall returned to the WWE as part of Vince McMahon’s storyline attempt to destroy the company by bringing back the nWo (at the time, Ric Flair was the kayfabe co-owner of the company).

Unfortunately, Hall’s personal problems persisted and he didn’t last long in the company.

Hall’s undeniable charisma, popularity, and ring skills kept him in demand but by the 21st century, it was becoming clearer that Hall was damaged goods.

In 2011, a video went viral of Scott Hall appearing at a Fall River, Massachusetts indie show in “no condition to perform” (wrestling code for impaired due to the point of being dead on his feet).

The viral video piled on alarming concern that Hall was going to drink and/or drug himself to death.

In 2013, Hall was confined to a wheelchair, a physical and emotional wreck. However, Hall wasn’t ready to die yet and he reached out to fellow wrestler Diamond Dallas Page (who had once managed him in WCW).

After retiring from the ring, Page had started DDP Yoga, a program designed to help people take back their lives. With Page’s help, Scott got back into shape and received the health care he’d been neglecting. Much of Hall’s road to sobriety around this time was chronicled in the documentary, The Resurrection of Jake the Snake.

In 2014, Scott Hall was a new man and the WWE chose to honor him by inducting him into the company’s Hall of Fame. It was a testament to Hall’s career and his personal achievement in finally dealing with the demons from his past.

Hall continued appearing in the WWE during specials such as RAW 25 Years and was inducted into the WWE Hall of Fame a second time in 2019 for his role in the nWo. Scott also helped his son Cody who was pursuing a career in wrestling.

Hall’s later years were marked by health problems including seizures and heart problems.

In March 2022, Hall fell and broke a hip, requiring hip replacement surgery. Surgery complications arose and on March 13, Hall suffered three heart attacks, reportedly due to a blood clot that had loosened after the surgery.

On March 13, 2022, Hall was placed on life support, his family visiting him one last time before his death on March 14, 2022. The news was broken by Kevin Nash, best friend to Hall, who sent out the following heartfelt message via his Instagram account:

Scott Hall was 63. He is survived by his two children.

Heart issues are also a common culprit in the early death of professional wrestlers. Some of the bigger names from the squared circle to pass away from heart-related ailments include Andre the Giant, Brian Pillman, Bruno Sammartino, Randy Savage, Rick Rude, Road Warrior Animal, Road Warrior Hawk, and the Ultimate Warrior.