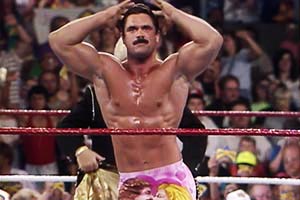 What I’d like to have right now… is for all you fat, out of shape, no good internet trolls, to keep the noise down, while I take my robe off and show the ladies what a real sexy man looks like. *cue saxophones*

Rick Rude was a special character. Arguably, no heel since him has been able to truly piss off the crowd quite like the Ravishing One.

Rick Rude’s WWE character was of course well known for his arrogance and womanizing ways. A master of the mic, Rude was one of the most believable heels of his time.

What separated Rude from his counterparts was that his in-ring ability matched his charisma. While guys like Hogan and Warrior were as over as ever in the late 80s, they didn’t exactly have the in-ring skills of some of their midcard contemporaries. Rude had it all. 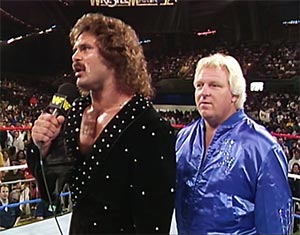 As skilled on the mic as he was in the ring. Rude cuts one of his classic promos at WrestleMania V. photo: wwe.com

Outside of the ring, Rick was a much different man, devoted to his wife and three children. In fact, he was so committed to his family that he would cover his wedding ring up with tape while in the ring rather than remove it when playing his character.

It’s no surprise that Rick Rude’s death left the wrestling world and fans stunned. Rude was widely loved by his fellow wrestlers. Even after his untimely death, which we’ll get to below, he remains one of the most respected performers to step foot in the ring.

Richard Rood, who would later become known by the wrestling name Rick Rude, was born in St. Peter, Minnesota, on December 7, 1958. Rick attended high school with a number of other guys who would go on to become professional wrestlers, including Curt Hennig.

Prior to getting into wrestling, Rick attended college and earned a degree in physical education. He would end up a pro wrestler before he would ever set foot into a classroom.

10 years before his death: Rude makes short work of a jobber and then shows off his womanizing ways (Wrestling Challenge, 1990)

Like many professional wrestlers from his era, Rick Rude began wrestling in territories, capturing a number of titles during the early 80s. These included the Mid-South Tag Team Championships, and Florida World Heavyweight Championship. 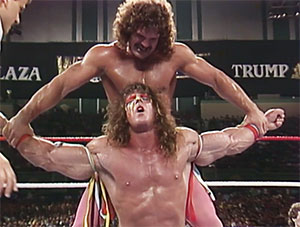 Arguably one of Rude’s most memorable feuds in the WWF was with the late Ultimate Warrior. photo: wwe.com

A Move to the WWF

Managed by Bobby Heenan, Rick Rude made his WWF debut in 1987.

From his very first appearance, Rick Rude captured fans’ attention by chasing the girlfriends and wives of his competitors and boasting about his skills.

Rude became a heat magnet – a perfect contrast to the babyfaced stars during the Hulkamania era.

On May 2, 1989, Rude won the WWF Intercontinental Champion belt by defeating The Ultimate Warrior. The story line continued through the summer with Warrior finally reclaiming the belt by the end of August.

While Rude was on the up and up on a professional level, he was also a well known drug user, including the use of steroids. Back in the 80s, and into the 90s, this wasn’t exactly an uncommon theme in the wrestling world.

In 1991, Rick Rude moved from the WWF to WCW, where he was a part of the Dangerous Alliance that included the likes of Stunning Steve Austin, Madusa, and Paul E. Dangerously.

Although Rick Rude was considered a success in WCW, his career was cut short due to a neck injury. He ultimately had to forfeit his title in 1994 as he was unable to return to the ring. The story line had it that Rude was found to be cheating by using his championship belt as a weapon. 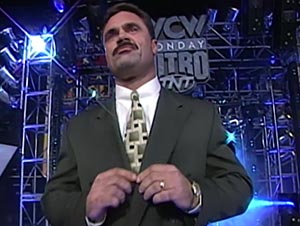 In a highly controversial move, Rude appears on (a previously taped) Raw and Nitro on the same night. WWE wasn’t aware of Rude’s signing to WCW. photo: wwe.com

No longer able to wrestle, Rude was able to collect on a Lloyd’s of London insurance policy to pay for his expenses. In the late 90s, Rick made a number of WWF and WCW appearances, but he never wrestled again.

He briefly joined Shawn Michaels, Triple H, and Chyna as a bodyguard for one of the original incarnations of Degeneration X.

Long-time friend Bret Hart credits Rude as helping him make the jump over to WCW.

In 1998, it was said that Rude had been adamantly training in hopes of getting back into the ring. Sadly, that goal would never come to fruition.

Rick Rude’s death occurred on April 20, 1999. He was only 40 years old. He was living in Alpharetta, Georgia at the time.

An autopsy was done to determine caused Rick Rude’s death. The cause of death was listed as heart failure. Because there was empty prescription bottles found in his home, it’s widely discussed that Rude’s heart failure was due to a drug overdose, though this hasn’t been confirmed publicly.

Given the stories of Rick Rude’s past drug abuse, combined with the fact that he was battling injuries and hoping to make a comeback in the ring, sadly, a drug overdose is not far fetched. Whether it was a particularly heavy amount of drugs that was taken just prior to his death has been speculated, but many note that Rick’s lifestyle simply may have caught up to him. Rick Rude’s funeral services were held on April 24, 1999 at the Roswell Funeral Home in Roswell, GA.

His grave is located at Green Lawn Cemetery in Roswell, GA. A memorial bench is located next to his grave, dedicated by Rick’s three children.

Sadly, Rick’s son, Colton Rood, passed away in 2016. He was killed in a motorcycle accident on September 3rd in Armuchee, GA. He was only 19 years old.

Remembering Rick Rude After His Death A memorial bench in Rick’s honor, located next to his grave. photo: Marietta Urton

After Rude’s death, a number of professional wrestlers spoke out about what a good person he was. His close friend Bret “Hitman” Hart spoke at length about him to the press. Hart even wrote about how much Rude had meant to him in his autobiography.

Other wrestlers, including Rick Martel and “The Mountie” Jacques Rougeau also sang Rick’s praises, saying he was an extremely fun guy to have around in the locker room… and also one of the guys that you didn’t want to mess with because he could beat your ass.

The fact that Rude was so convincing in selling his persona in the ring is proof that he wasn’t just a skilled wrestler; he was a world class entertainer. It’s clear that despite how early Rick Rude’s death occurred, the wrestling world will never forget him. R.I.P. to the Ravishing One.

Update 3/6/17 – After getting snubbed for too many years to count, the WWE has finally gotten it right, with Rick Rude being posthumously inducted into the the WWE’s Class of 2017 Hall of Fame! Now, hit the music!

Have a comment about Rick Rude? Sound off in the comments section below!