Best known for his work as “Uncle Elmer” during his run alongside Hillbilly Jim, Cousin Luke, and Cousin Junior, big man Stanley Frazier wrestled in the south, including a run in Memphis wrestling where he worked under a variety of aliases.

Plagued by diabetes, Frazier died at the age of 54, but he left a lasting impression on fans who grew up watching the WWF during the height of the Rock-n-Wrestling Era.

Stan Frazier’s wrestling career dates back to the 1960’s when he enraged fans with his brutal beatdowns of babyfaces as the masked man known as “The Convict.” 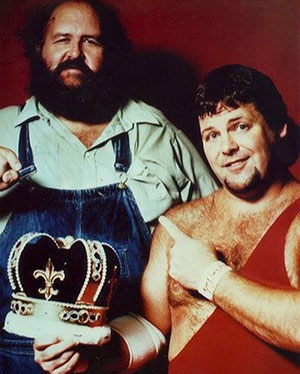 Elmer had a big money feud with Jerry “The King” Lawler during the 1970’s.

While Frazier was never considered a gifted worker, his size and weight (6’10” and 400 or more lbs.) made him an imposing presence in the ring.

One memorable program was his feud with Bobo Brazil, with Frazier having the distinction of being the first wrestler Freddie Blassie managed.

Frazier worked throughout the south, including Gulf Coast Wrestling, and a big money feud with Jerry “The King” Lawler during the 1970’s. Frazier adopted many identities during his time in Memphis including the Lone Ranger, Kamala II, Giant Rebel, Giant Hillbilly & Tiny Frazier. In Japan, he worked under the moniker of “The Masked Convict” during a program with Giant Baba.

However, a new identity would lead to Frazier’s biggest fame in his career…

When Hillbilly Jim joined the WWF in 1984, he was soon joined by his kayfabe family—Uncle Elmer and Cousin Junior. The mammoth Uncle Elmer fit in well in the WWF’s land of giants:

At one point, Uncle Elmer held the record for the fastest pin in the WWF.

Uncle Elmer helped his kayfabe nephew battle the WWF’s heels, and Elmer got married to his longtime girlfriend Joyce Stazko during the October 1985 episode of Saturday Night’s Main Event. The marriage was no work and the couple stayed together until Frazier’s death. The ceremony led to an angle where “Rowdy” Roddy Piper interrupted the ceremony and color commentator Jesse “The Body” Ventura mocked the proceeding.

Uncle Elmer appeared at WrestleMania II in a losing effort to Adrian Adonis. He wrestled several more matches before his WWF exit.

Winding Down His Career

After leaving the WWF in 1986, Frazier continued his career in the ring, working in Memphis as Giant Hillbilly Elmer, teaming with Jerry Lawler to win the AWA Southern Tag Team Titles and the promotion’s Super Heavyweight Championship.

There is no denying Stanley Frazier was a box office draw in the territories he worked, even if he wasn’t a technical master like Harley Race or Jack Brisco. Frazier has drawn heat from some of his peers, accusing him of not only being a poor worker, but a con man who hawked shoddy merchandise to fans and fake Rolexes to anyone willing to buy them. Nonetheless, he brought some memorable moments to fans and it is arguable it’s a case of separating the art from the artist. While some purists may shudder at the idea of calling Frazier’s work art, the industry has a long history of wrestlers with limited in-ring talent who still proved to be successful draws.

With Frazier’s weight out of control, he was beset with health issues including diabetes. On July 1, 1992, Frazier died from kidney failure at the age of 54. He is buried at the Biloxi National Cemetery in Biloxi, Mississippi. Many other well known wrestlers died in the 1990s including Andre the Giant, Bruiser Brody, Kerry Von Erich, Owen Hart, and Rick Rude.