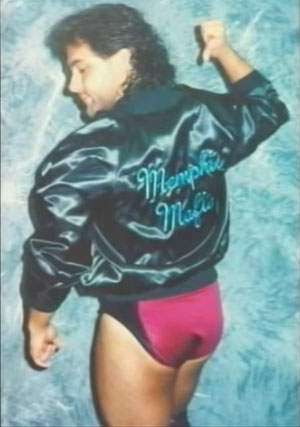 Not everyone gets to be a wrestling star, but wrestling’s enhancement workers play an important role in making said stars look dominant. One such enhancement worker was Joey Maggs, whose abilities found him work in WCW and the WWF putting over some of the promotions’ biggest names.

Unfortunately, Maggs joined the number of wrestlers who passed away before their 40th birthday, dying at the young age of 39.

A Start in the South

Joseph Magliano was born on September 29, 1967 in Baltimore, Maryland. He began working in Buck Robley’s promotion Deep South Promotion in 1987. Working as Joey Maggs, he developed his craft in the South, eventually working in the Memphis promotion United States Wrestling Association (USWA) where he captured the USWA Tag Team Titles with Rex King and the USWA Junior Heavyweight Championship. Joey Maggs as one half of ‘The Creatures’ – WCW Halloween Havoc, 1991. photo: wwe.com

Putting Wrestlers Over for Money

Joey Maggs hit the big-time, going to work in WCW as “Jumping” Joey Maggs. His first match was against the late Tom Zenk, a wrestler he remained close friends with.

As an enhancement talent, Maggs took pride in his ability to make the worst workers look good. He teamed with with Johnny Rich under “The Creatures” moniker at 1991’s Halloween Havoc – the pair were on the losing end of a bout against Big Josh and P.N. News.

Maggs participated in WCW’s 1991 Light Heavyweight championship tournament, putting over wrestler Badstreet in the first round. He later went on to work in the WWF, appearing on Wrestling Challenge and Superstars.

In 1998, Maggs’ career ended when a nagging shoulder injury forced his retirement from the ring. Maggs credited WCW with taking care of him after his injury. Not much is is known about Joey Maggs’ post-wrestling career. At one point, he was attending flight training school to become a cargo pilot. In 2005, Maggs worked as a stunt man on the film The Dukes of Hazzard in an uncredited role.

Maggs had few regrets about wrestling, and while he never hit the big time, he seemed content with what he’d accomplished. Maggs said it best in an interview at TomZenk.net: “A wrestling career….I’d certainly do it again! Nobody’s ever had that kind of fun. I’d change a few things (like the tights I wore) but Tom and I did things that people dream about – staying in first class hotels, flying first class, pampering yourself, buying sportscars and other luxuries.”

Joey Maggs passed away on October 15, 2006 at the age of 39. His cause of death is not public knowledge.

Many other wrestlers didn’t make it to age 40, and we’ve previously chronicled wrestlers who passed away before age 50.

Have any memories of Joey Maggs? Share them in our comments section below.