Days after being treated and released from a Maryland hospital from dehydration, wrestling legend Nikolai Volkoff has died at age 70.

A cause of death has not yet been made public. Nikolai Volkoff was quickly signed by Vince McMahon Sr.’s WWWF, and by 1974 he was battling company golden boy Bruno Sammartino.

Late in ’74, Volkoff moved over to Verne Gagne‘s AWA, wrestling under the moniker “Boris Breznikoff” (though he carried with him the same evil Russian gimmick). He was managed by the late Bobby Heenan during his AWA run.

A decade later and Nikolai Volkoff would find himself back with the WWWF for a memorable run – by this time the company was under the control of Vince McMahon Jr. and shortened to the “WWF”. 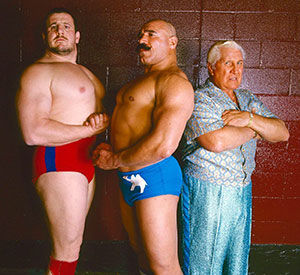 From left to right: Nikolai Volkoff with tag partner the Iron Sheik and manager Freddie Blassie

In 1985 at the first WrestleMania, Nikolai Volkoff and The Iron Shiek defeated The U.S. Express to capture tag team gold. Of course, working as heels, they won the belts in controversial fashion – Volkoff using manager Freddie Blassie‘s cane to secure the victory.

Nikolai Volkoff will best be remembered for his heel heat, which was in another stratosphere. Singing the soviet national anthem upon his ring entrance enraged the fans. The United States, after all, was at the height of the cold war in the 80s, and kayfabe was still a thing. Fans would commonly pelt Volkoff with trash while he showed off his singing chops.

By the early 90s, Volkoff was in “semi-retirement” from in-ring action, though he still made sporadic one-off appearances for the WWF/WWE up until 2014.

Nikolai Volkoff was inducted in the WWE Hall of Fame in 2005.

He leaves behind his wife of 48 years and two daughters.