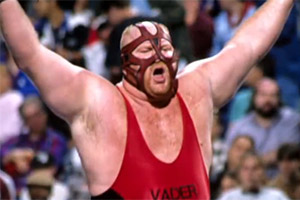 The son of the legendary wrestling big man has confirmed his death via Twitter.

Most of Vader’s wrestling success was in Japan and with WCW, though he took part in plenty of WWF storylines in the mid 90s. Prior to stepping into the ring, Leon “Vader” White played for the University of Colorado (and eventually the Los Angeles Rams). photo: university of colorado boulder athletics

Prior to getting into a wrestling ring, White saw success on the gridiron – and his massive frame, combined with an unfathomable agility, made him a star.

In the mid 70s, White played for the University of Colorado as a top ranked center.

By 1978 he was drafted by the Los Angeles Rams.

Though his career in the NFL was short, Vader holds the distinction of being one of only two full-time professional wrestlers to compete in a Super Bowl. The Rams took on the Steelers in a losing effort at Super Bowl XIV.

The only other full time wrestler (we’re not looking at gimmick matches) to play in a Super Bowl was Monty Brown.

Vader’s NFL career ended abruptly after he suffered a ruptured patella, but his career in the spotlight was far from over. Vader transitioned to the squared circle, with very memorable runs in both New Japan Pro Wrestling and World Championship Wrestling. 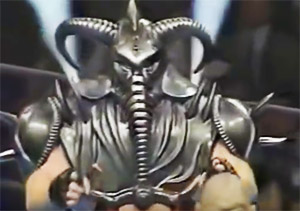 After a brief run with the AWA, and a more prominent run with the CWA, Vader eventually inked a deal with New Japan in 1987. He was given the moniker ‘Big Van Vader’ and his legend was born quickly after defeating top star Antonio Inoki in under three minutes at the Sumo Hall in Tokyo. The crowd was so upset with Inoki’s loss that a full blown riot ensued.

With WCW, Vader took part in memorable feuds among the likes of Sting and Ric Flair. He held the WCW World Heavyweight strap on three occasions.

Though his run with the WWF seemed to be more of an after thought, fans watching in the mid 90s will no doubt remember Vader’s attack on kayfabe WWF president, Gorilla Monsoon:

In a pre-Austin/Vince WWF, the move gained Vader tremendous heat with the crowd.

In a December 2016 shoot interview, Vader candidly spoke about a heart specialist informing him that he only had two years to live.

After surgery, Vader’s son Jesse Tweeted out: “I wanted to let everybody know that I just spoke to the Surgeon. The surgery was a success but it was worse than we had expected. Long road for recovery. Will keep you posted. Thank you for the prayers.”

A second surgery followed in May 2018 for an irregular heartbeat. Around this time, White was battling pneumonia, and sadly, the battle proved too much for the big man.

Heart complications are not an uncommon culprit to claim the life of professional wrestlers – many of whom died before age 50.

Several other notable wrestlers have passed in 2018, including Bruno Sammartino and Johnny Valiant.

We send our condolences to the friends and family of Leon White.