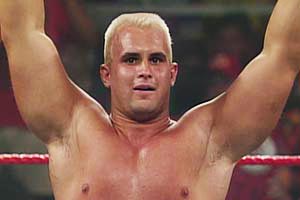 Chris Candido, perhaps best known for his run in the WWF as “Skip” with the Bodydonnas, dies at age 33. photo: wwe.com

Before his life was cut short, Skip Candido had an impressive wrestling career spanning several promotions. He is arguably most remembered as being “Skip” from the WWF. Alongside valet (and real-life girlfriend) Sunny – the duo were known as The Bodydonnas.

The Bodydonnas gimmick portrayed Skip and Sunny as arrogant work-out freaks, continuously taunting the crowd for being fat and out of shape. No Gimmicks Needed! Chris Candido works Balls Mahoney during an episode of ECW’s “Hardcore TV” in 1997. Sadly, both men are no longer with us. photo: wwe.com

Aside from his run with the Bodydonnas, Candido spent a brief period in the WCW. He stayed long enough to pick up a Cruiserweight title, but ultimately would head to the independents.

Prior to Candido’s WCW run, he spent 1996-1999 with ECW. He had a successful run with the promotion and was given the moniker “No Gimmicks Needed” – appropriate considering the WWE had given him a pretty ridiculous gimmick with the Bodydonnas.

In 1995, Wrestling Observer named Chris Candido the Most Underrated Wrestler of the Year, attesting to his impressive abilities that often went unnoticed in the highly competitive world of wrestling (having a valet like Sunny also probably isn’t going to help get you noticed – just ask Marc Mero).

Sadly, we’ll never know how much Chris Candido could have accomplished in the ring. His career was suddenly cut short by his death at the age of just 33.

At the time of his death, Chris Candido was signed with TNA. During the taping of the “Lockdown” PPV on April 24, 2005, Chris Candido took to the ring in a tag team match with partner Lance Hoyt. In a steel cage, Chris Candido and Hoyt faced off against Apollo and Sonny Siaki. During the match, Chris broke two bones in his leg and dislocated his shoulder. The injury was severe enough to require emergency surgery. Doctors inserted titanium plates into his leg. Although he was still recovering, Chris attended a taping of Impact! Wrestling, serving as the manager to The Naturals shortly after surgery. Skip and Sunny made their WWF debut as “The Bodydonnas” in 1995. Within 10 years, Chris “Skip” Candido would be dead. photo: wwe.com

Even though he had been up and about following his surgery, Chris was just days away from death when he was released from the hospital on April 25, 2005. On the morning of April 28, 2005, Chris complained of not feeling well but continued on with his day. Later that night he collapsed.

Candido was rushed to Robert Wood Johnson University Hospital in New Brunswick, New Jersey. He was treated for pneumonia, but he died shortly after reaching the hospital.

There was initially some uncertainty about Candido’s cause of death. Some argued he died from a blood clot. This likely resulted from Chris’ younger brother, Jonny Candido, stating shortly after his death: “I find it only fitting you hear the truth from me about the death of my best friend, brother, and soulmate. Chris died tonight due to a blood clot brought on by complications with his surgery.”

Later, Jonny clarified: “It wasn’t a blood clot that killed him. The autopsy said the cause of death was acute pneumonia. We did an autopsy and it turns out that someone, against doctor’s orders, had given him a sleep aid. They said “Here, you need to sleep. Take this.” So he took it and it slowed down his breathing, his lung filled with fluid and he died of acute pneumonia. It’s a fucked up story. It would take me forever to even start getting into it.”

Chris Candido was cremated. What was done with his ashes is not public knowledge.

Gone but not forgotten, Chris Candido was celebrated by the world of wrestling after his death. TNA honored him by holding the Chris Candido Memorial Tag Team Tournament on August 16, 2005 in Orlando, Florida.

In 2009, Chris’ name was added to the ECW Hardcore Hall of Fame. The induction ceremony was overseen by The Sandman, and the late wrestler’s family was on hand to receive the award.

Have a comment about Chris Candido? Sound off in the comments section below!