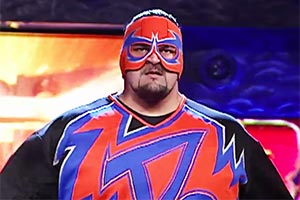 Matt Anoa’i, better known to WWE fans as Rosey, has passed away at age 47. He suffered from heart failure related to obesity.

Anoa’i suffered from heart complications as early back as 2014.

The surname Anoa’i is nearly as synonymous with professional wrestling as Von Erich. Matt Anoa’i was part of the legendary Samoan wrestling dynasty, which includes the likes of Yokozuna and Umaga, both of whom also passed away before age 50. 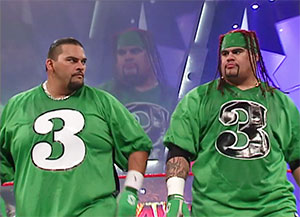 Matt Anoa’i spent several years on the independent circuit throughout the mid to late 90s, including tours in Japan and a brief run with ECW. Most of his indie career was spent alongside his cousin, Eddie Fatu.

In mid 2002, the pair were called up by WWE. They debuted as enforcers for Eric Bishoff, dubbed 3-Minute Warning.

The partnership would fizzle out after a year when Fatu was released by the WWE.

Rosey was then repackaged as a superhero. He partnered with The Hurricane (Shane Helms) and despite being a comedy gimmick, the duo would end up getting a considerable amount of TV time; even winning the WWE tag team championships in May of 2005 at Backlash. They were briefly joined by Stacy Keibler who acted as a valet – referred to as Super Stacy.

The Hurricane and Rosey would hold tag team gold throughout the Summer of 2005, before ultimately giving up the titles at the Unforgiven PPV in September. They lost the titles to Lance Cade and Trevor Murdoch. Cade passed away in 2010 from a drug overdose. He was 29.

The Anooa’i family has issued the following statement to the WWE regarding Rosey’s passing: “The Anoa’i family is mourning the loss of Sika’s son, Matt aka Rosey, due to an untimely death.

We want to let his fans know that he loved them and the wrestling world so much. In his passing, he left three beautiful young children and a heartbroken family. Please respect the privacy of his children and family as they mourn the loss of this kind, loving, gentle man, who was a father, son, brother and a superhero to us all.

Our family appreciates your prayers and continued support during this very difficult time.”

Several WWE superstars and personalities, past and present, have Tweeted out about Rosey’s death. Here’s a few of note:

Heart wrenching phone calls are not the way to start a day. Tell your loved ones you love them. Let them know!

Condolences to the family. ?

My deepest condolences to the entire Anoa'i family.

I loved these guys. pic.twitter.com/59xTvrtBwB

Sadly, Matt Anoa’i is among a long list of other notable professional wrestlers who have passed away before age 50. We’ve profiled several of these young wrestler deaths on our Dead Before 50 page.

Our condolences to Matt’s friends and family.