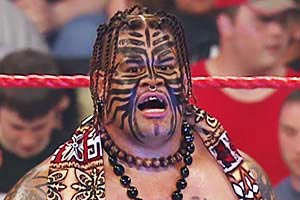 To die at the young age of 36 is tragic. Such was the case for professional wrestler Umaga. Here is the Umaga death story.

He started his wrestling career in the WWE with a brief stint from 2002-2003 under the ring name Jamal. He was partnered with Matt Anoa’i, his real life cousin, who went by Rosey. Sadly, Rosey passed in 2017. 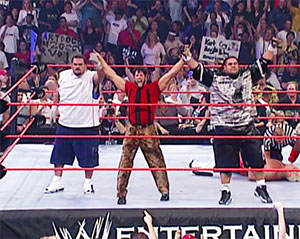 When first called up by WWE, Eddie Fatu (given the name Jamal) formed 3 Minute Warning, alongside his cousin, Matt Anoa’i (Rosey). photo: wwe.com

The duo formed the tag team 3-Minute Warning. Unfortunately by mid 2003, Fatu was dismissed from the WWE after rumors surfaced about his involvement in a bar fight.

Then Eddie Fatu reemerged on the wrestling scene, this time under the name of Ekmo. He wrestled for TNA and went overseas to partake in All-Japan Pro Wrestling. The time came when he returned to the WWE, this time as the Samoan bulldozer Umaga.

Umaga was known for being unpredictable and a fierce competitor in the squared circle. It wasn’t long before he saw Intercontinental gold with the WWE.

Perhaps his most popular match was at WrestleMania 23 in 2007. Umaga was represented by Vince McMahon, facing off against Bobby Lashley, who was being represented by Donald Trump. Each rep put his hair on the line and ultimately it was WWE boss McMahon whose head got shaved. The shaving was done by Trump himself.

Controversy from Life to Death

While the 2009 Umaga death story was controversial as he passed so young, the wrestler also had personal controversies while alive. For example, he was part of the infamous Sports Illustrated article about pharmaceutical purchases, which violated the WWE’s Wellness Policy.

Umaga was suspended for this activity. Then, he was released from the WWE in June when he later failed a second round of drug testing and refused treatment in a rehab center. Only months later was the official announcement of the Umaga death, which right from the start was speculated by media outlets to be caused by a heart attack.

Circumstances of the Umaga Death

The professional wrestler died of a heart attack on Friday, December 4, 2009. He passed away in a hospital in Houston, TX. He was found in his Houston home on the previous evening (Thursday) by his wife. He was sitting in front of the television when she found him. 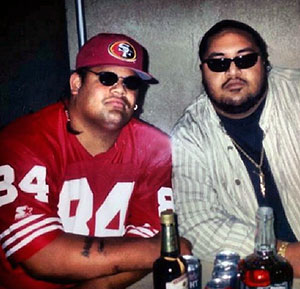 Umaga with his late cousin, Rodney Anoaʻi (known to wrestling fans as Yokozuna)

Reports are that he was not breathing at the time and had blood materializing from his nose.  The wrestler was rushed to the hospital, where he was put on life support. His family were instructed to come to Houston as soon as possible.

The official cause of the Umaga death was released almost three months after it occurred. Dan Morgan, who was the supervisory forensic investigator for Harris County in Houston determined that the cause was “acute toxicity due to combined effects of hydrocodone, carisoprodol, and diazepam.”

In other words, the Umaga death was due to taking a lethal mix of painkillers, muscle relaxers, and anti-anxiety meds. While rumors were that he had a drug abuse problem, chronic drug use was not why he passed away in December of 2009. Instead, it was because of a lethal mix of drugs taken within a short period.

November 28, 2009 – Umaga’s final match was wrestled on Hulkamania’s tour in Sydney, Australia. One week after this match he would be found dead

Reaction to the Umaga Death Announcement

The reactions of top wrestling personalities to the Umaga death tragedy were publicly shared on Twitter soon after the news headline surfaced. As Tara (aka Victoria) wrote, “Rest in Peace Umaga. We will love you always and we will all miss you.”

Another tribute was written by Chris Jericho, and it read, “Eddie Fatu was an awesome guy and one of the brothers. I trusted him and that’s a rare thing for me. I am devastated. Safe travels Oos…” As for Torrie Wilson, the words shared on the social media platform were simple but heartfelt, “Much love my friend. Much love.”

On Saturday, the day after the Umaga death, there were 545 fans on a Facebook tribute page to the famed wrestler. Numerous messages of mourning had filled social media networks and the blogging world.

The WWE released a tribute message for Umaga, although the organization clearly stated in the statement that the wrestler was not part of the WWE roster at the time of his passing. “WWE would like to express its deepest condolences to Mr. Fatu’s family, friends and fans on his tragic passing.”

Eddie’s family has roots which run deep in the wrestling world. He was trained by his uncles, known as the Wild Samoans (Afa and Sika). Eddie’s cousins included The Rock, the late Yokozuna, Rosey, Rikishi, and current WWE superstar Roman Reigns. He was the uncle of current WWE tag team The Usos.

How to make a great heel in wrestling? Attack a female. This video is 3 years before Umaga’s death (Raw – November 6, 2006)

Why the Umaga Death Headline was Shocking

Without question, the first reason for the shock was the Samoan-American wrestler’s young age; he was not even 40 years old. Secondly, he had been noted as looking healthy and strong during his stint on a wrestling tour in Australia, as per writer James Caldwell of Pro Wrestling Torch. Also, he had worked almost right until his death, so the event was certainly unexpected to family, friends, and fans alike.

Umaga’s passing added to a surprisingly high number of wrestlers who have died before the age of 50. Other wrestlers who passed away at a young age include Eddie Guerrero (38), Andrew “Test” Martin (33), and “The British Bulldog” Davey Boy Smith (39).

Particularly sad too was that rumors were circulating just prior to Umaga’s death that he might return to the WWE. Given the huge outpouring after the news of the wrestler’s passing, it is clear that he was well liked by his peers and fans alike.

Eddie Fatu left behind his wife in Houston and four children.

Have a favorite Umaga memory? Share in the comments below.