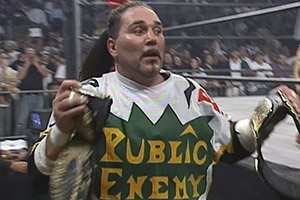 One half of the tag team “Public Enemy” – Rocco Rock, dead at 49. photo: wwe.com

Public Enemy, made up of Rocco Rock and Johnny Grunge, was one of the most celebrated and feared tag teams of the 1990s. Together, they won the ECW World Tag Team Championship four times, and also had a brief run as WCW Tag Team Champions.

Loved by fans, former welder Teddy Petty (known to wrestling fans as “Rocco Rock”) was in the midst of a successful career in the independent circuit when the Rocco Rock death story occurred.

The Events of the Rocco Rock Death

On September 21, 2002, Rocco Rock began to have chest pains in his car. At the time, Rocco was on his way to a Pro-Pain show. He was scheduled to face off against Gary Wolfe. Tragically, he died on the New Jersey turnpike while his father and his girlfriend looked on. 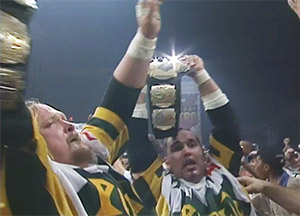 Being that Rocco Rock was only 49 years old at the time of his death, rumors began to fly when news of his passing was released to the public. Many people looked back at the deaths of other wrestlers and concluded that Rocco Rock must have been heavily using illegal drugs at the time of his death or that he was involved with anabolic steroids that may have damaged his heart. His family maintains that Rocco Rock did not use drugs of any kind. Rather, his death has been ruled as a massive heart attack due to a congenital heart defect that apparently runs in his family.

The Sad Impact of the Rocco Rock Death Story

The death of Ted Petty was sad enough, but his passing would actually end up playing a role in another tragic death. Just four years later, Rocco Rock’s partner, Johnny Grunge, would also be dead due to heart problems. People who knew Johnny Grunge well have reported that the former wrestler was grief stricken over the news that his long-time partner and friend had passed away. People say that Johnny was never the same after that and that he let his health decline, resulting in his death.

3 years before his death: Rocco takes on Goldberg in an August ’99 episode of WCW Thunder

Rocco Rock may have died at an early age, but he has never been forgotten. In 2007, he was added to the Hardcore Hall of Fame at the ECW Arena in Philadelphia, Pennsylvania. A banner with his name printed on it continues to fly to this day beside one with Johnny Grunge’s name.

Both members of The Public Enemy were also posthumously inducted to the New England Pro Wrestling Hall of Fame in 2010 in honor of their achievements in Tag Team wrestling. Have a comment about Rocco Rock? Sound off in the comments section below.