Harley Race, a familiar face to wrestling fans for decades, an icon in the wrestling world, a record-setting National Wrestling Heavyweight Champion, and one of the toughest and most respected figures in professional wrestling.

Race battled adversity numerous times in his life, stared down death more than once, and was the last of the wrestling world’s shooters, a champion who could defend the belt for real should his opponent try and pull a double-cross.

Missouri native Harley Race was never one to let someone tell him what to do, defying authority throughout his life. At 15, Race was expelled from school for punching out his principal. Given the option to apologize and return, Race opted to leave school and devoted his free time to fulfilling his dream of becoming a professional wrestler.

Race worked as a farm hand and in an amazing instance of happenstance, the farm was owned by Stanislaus Zbyszko, a legendary wrestler from the early 20th century. Zbyszko took Race under his wing and taught him the basics before Harley met promoter Gus Karras, who operated wrestling shows at carnivals.

Race worked these carnivals, further learning the trade and how to protect himself in the ring. These carnivals required tough performers because a wrestler never knew who was going to step into the ring. During the shows, a wrestler would challenge someone from the audience, offering a cash prize to anyone who could beat him. Race started off by posing as an ordinary Joe who would take up the wrestler’s challenge. Later on, he would graduate to being the wrestler who took on the plant in the audience. As easy as this gig seemed, it didn’t always go according to plan and sometimes a real contestant made it to the ring before the plant. This meant Race could face anyone from an ornery farmer to the local barroom brawler looking to get their hands on the prize money. These encounters taught Race how to defend himself in just about every conceivable situation in the ring, a talent Race sometimes relied on when fans jumped into the ring or attacked him on his way in or out of the ring.

Race continued honing his skills until it seemed the world was his for the taking. However, like fellow legend Ric Flair, an accident nearly ended both Race’s career and his life. A horrific car crash killed Race’s pregnant wife and Race himself was so severely injured that medical personnel told him one of his legs had to be amputated. Harley’s friend and promoter, Gus Karras sent Race to a bone specialist and the leg was saved. Nonetheless, Race was told he’d be lucky if he ever walked again, let alone wrestle.

For the next two years, Race endured a painful rehabilitation process that paid off and he returned to the squared circle.

The gutsy grappler worked in several territories before settling in the American Wrestling Association (AWA), where he formed a lengthy tag team partnership with Larry Hennig. The roughhouse duo won AWA Tag Team Titles several times, feuding with popular AWA stars including the Crusher, Dick the Bruiser, and Verne Gagne.

“Handsome” Harley’s work caught the eye of Japanese promoters who invited him to wrestle for him, a rare honor for Americans.

In the early 1970’s Race shifted his attention to wrestling’s top prize—the world heavyweight championship. Never one to rest on his laurels, the would-be champion learned new skills in the ring and also learned about the sport’s day-to-day operations, becoming a booker and later investing in the promotion, Heart of America Wrestling. 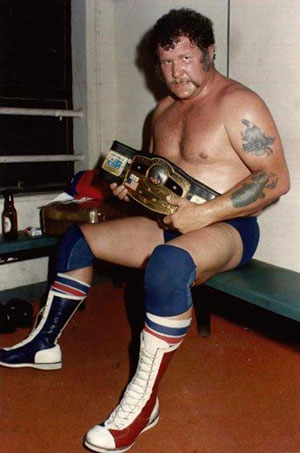 His years of hard work paid off in 1973 when the NWA Board of Directors chose him as their next NWA World Champion. Race was only a transitional champion on this occasion because the NWA had chosen Jack Brisco to win the belt but current champion Dory Funk Jr. refused to drop the title to Brisco. Thus, belt went from Funk to Race to Brisco, but in the end, wrestling’s top belt was around Race’s waist.

Despite a short title reign, Harley Race would hold the belt another seven times, breaking Lou Thesz’ record of six NWA World Championships. Like any champion from his era, Race defended the title every night of the week, traveling the globe as he did so.

The strain on his family was intense but Race did the best he could to be in his kids’ lives. When summer vacation rolled around, Race would take his family with him on the road. Although it was difficult, Race tried to play a part in their lives despite his hectic road schedule. For example, he flew 4,000 miles to make sure he saw his son wrestle in the state wrestling finals.

In 1983, Jim Crockett Promotions (the strongest promotion in the NWA) ran its closed-circuit extravaganza Starrcade, with NWA World Champion Harley Race defending the belt against the previous champion “Nature Boy” Ric Flair in a steel cage match. It was arguably the biggest night in Jim Crockett Promotions’ history and Race played a pivotal role as the villain looking to keep the hero from regaining the belt.

Outside the ring, another villain was looking to sabotage Starrcade.

Promoter Vince McMahon Jr. saw an opportunity to sandbag one of his biggest competitors and two days before Starrcade, McMahon flew Harley Race in to meet him for dinner and to discuss business. Race was beginning to grow tired of wrestling as his hectic travel schedule was taking its toll on his loved ones, despite his best efforts to see them. Race was also close to losing his $500,000.00 investment in Heart of America Wrestling

During their dinner, McMahon reportedly offered Race $250,000 to jump to the WWF. The NWA Champion knew McMahon would score a coup if he acquired Race’s services and this would sink Starrcade’s main event. McMahon demanded an immediate answer and despite the financial incentive, Race refused to betray the NWA, an organization that had given him so much—nor would he betray his promise to drop the title to Ric Flair as promised. Race told McMahon no, unaware that by now, McMahon was used to getting what he wanted.

After the dinner, an irate McMahon launched himself at Race only to find himself caught in a crossface. In his memoir, Harley Race discusses how he was ready to snap McMahon’s neck but came to his senses.

The champion’s honor stayed intact as he appeared at Starrcade, dropping the belt to Flair. After a much-deserved vacation, he returned to the ring, only to see NWA promoters unable to cooperate against Vince McMahon’s efforts to expand the WWF. Race saw the proverbial writing on the wall and ultimately went to the WWF, but on his own terms as his career came to an end. Race enjoyed his last few years of active competition in the WWF as “The King of Professional Wrestling” before injuries forced him to retire.

Harley Race continued working in wrestling, this time serving as a manager in WCW, including a memorable tenure as Vader’s manager and adviser.

Race eventually launched his own wrestling school, the Harley Race Wrestling Academy, and ran his own promotion for his students to work in.

In later years, Race suffered a number of medical issues but always stood tall, impressing his fans and fellow wrestlers with his tenacity.

Harley Race is survived by his 3 children.