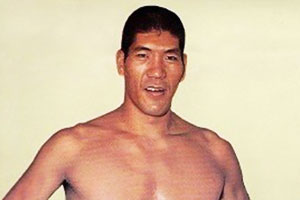 Japanese wrestling legend Giant Baba, Dead at 61 from liver failure – an end result to the cancer he was a battling.

Japanese wrestling has had its share of icons, with names like Rikidozan, Antonio Inoki, Jumbo Tsuruta, and Mitsuharu Misawa immediately coming to mind. However, no list of Japanese greats is complete without mentioning Shohei “Giant” Baba.

Baba would find acclaim in Japan as both a wrestler, and the co-founder of All-Japan Pro Wrestling. Baba’s accomplishments were many, up until his death from cancer at age 61.

From Pro Baseball to Pro Wrestling Giant Baba had baseball aspirations before turning to the squared circle.

Baba was a stand-out baseball pitcher in high school, earning a spot on the much-revered Tokyo Giants pro team after dropping out of high school in his junior year. However, Baba’s pitching record led to him being sent to the minors, then traded to another team. Whatever Baba’s future might have held in baseball ended when he slipped in his bathtub, injuring his harm so badly he could no longer play the game.

Standing at nearly 6’11”, it didn’t come as too much of a surprise to see Baba’s baseball aspirations take a left turn toward professional wrestling.

Japanese wrestling superstar Rikidozan saw Baba as a possible successor for him in the Japanese Wrestling Association (JWA). Baba trained under Rikidozan along with another future legend, Antonio Inoki.

Billed a height of 7’3” and a weight of 300 pounds, Baba toured the United States, wrestling the World-Wide Wrestling Federation Champion, the National Wrestling Alliance Heavyweight Champion, and the World Wrestling Association (WWA) Champion in one month, an unusual accomplishment for any wrestler, let alone a newcomer. 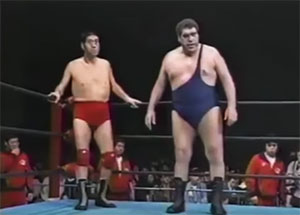 Giant Baba teams up with Andre the Giant to take on The Land of the Giants. All Japan Pro Wrestling, December 26, 1990.

While Baba’s tour was a financial success, his manager took most of his proceeds. Needless to say, the big man was happy to return to Japan when the opportunity arose. Little did Baba know, but he would be called upon to save professional wrestling in the JWA.

The Dawn of All-Japan Pro Wrestling

During Baba’s absence, his mentor Rikidozan had been murdered in a reputed gangland assassination. Wrestling suddenly was cast in an unfavorable eye, and there were concerns the industry might not last.

Fortunately, Baba was able to create a good image for wrestling and when he returned to Japan, his career took off. Giant Baba gets ready to take on Abdullah the Butcher. All Japan Pro Wrestling, September 10, 1989.

Baba formed a popular tag team with Antonio Inoki, with both men working in the JWA. However, as the JWA began to weaken, both Baba and Inoki considered forming their own promotion.

The JWA fired Inoki, who formed New Japan Pro Wrestling. Baba would leave JWA, founding his own promotion, All-Japan Pro Wrestling with two of Rikidozan’s sons. With wrestling friends Bruno Sammartino, Dick “The Destroyer” Beyer, and the Funks, Dory Jr. and Terry read to help out, Baba built All-Japan from the ground up.

Giant Baba was hugely successful, both as a wrestler and a promoter.

Baba won the NWA World Heavyweight Championship three times and worked with some of the biggest names in the business including Andre the Giant, the Sheik, Gene Kiniski, Lou Thesz, Harley Race, Verne Gagne, Jack Brisco, and Bruno Sammartino:

Baba’s size played a role in his success, but he also knew the fundamentals of wrestling, and from 1960 to 1984, Baba worked 4,000 matches without missing an appearance.

Baba also used foreign wrestlers as more than heels – he had Dick “The Destroyer” Beyer work alongside Japanese wrestlers, working as a babyface. Baba brought in the biggest names in the business to work for him, offering top pay and earning their loyalty and respect.

Although All-Japan was known for more traditional matches and ring psychology, it thrived thanks to Baba’s business savvy. Baba obtained the rights to the Tiger Mask wrestling character, boosting All-Japan’s business thanks to the popular high-flying star.

When the business began to change, Baba shifted gears, getting rid of disqualifications and count-outs so fans saw clean finishes. Business boomed thanks to this and Baba pushing stars such as Mitsuharu Misawa, Toshiaki Kawada and Kenta Kobashi. More important, he was well-received by the locker room for always honoring his word.

Shohei Baba was a wise businessman who invested in real estate and amassed what was rumored to be a considerable fortune. He parlayed his popularity into other money-making ventures outside the ring including commercials:

A Career Winds Down

Baba remained a beloved figure not only in wrestling, but in Japan, with some analysts comparing his popularity in Japan to that of Michael Jordan at the height of his NBA fame.

As Giant Baba grew older, he began working in tag team and six-man tag matches to cope with his reduced physical abilities. Shohei Baba was diagnosed with colon cancer. He underwent surgery to remove the cancer and in December 1998, the Japanese legend was released from the hospital with a good prognosis. By all accounts, Baba thought he had beat cancer when doctors informed him it had spread through his body.

Baba underwent a second operation in January, but it was not successful. Shohei Baba died on January 31, 1999. The cause of death was liver failure, an unfortunate end result to the cancer he was a battling. Baba was 61 years old and survived by his wife, Motoko.

What are your favorite memories of Giant Baba? Be sure to leave them in the comments section below. 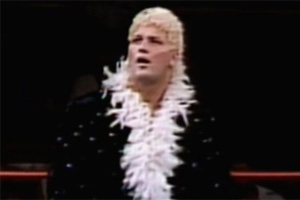