Bobby “The Brain” Heenan has died at age 72, losing his battle with throat cancer.

WWE confirmed the news this evening.

In 2002 Heenan announced his cancer diagnosis, though in subsequent years he still made appearances, communicating to fans through his wife.

WWE commentator Jim Ross first broke the news about Bobby Heenan’s death via Twitter, noting “The news of Bobby “The Brain” Heenan’s passing today gutted me. I loved our time together. No one ever did it better than the Wease.”

A legendary manager and color commentator, Bobby Heenan wrestled throughout the 60s and 70s, but his most recognized roles came from outside the ring. 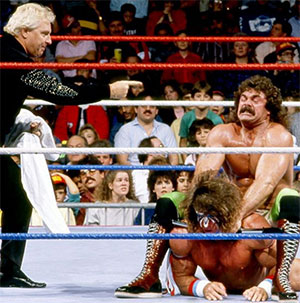 The Brain’s clients were collectively referred to as “The Heenan Family” – dominant heel forces in the then-WWF, taylor-made to draw heat from the crowd and feud with the Golden Era’s babyfaces.

Bobby “The Brain” Heenan was also a quick-witted, master heel behind the commentary table, where he often sat opposite Gorilla Monsoon. The duo called the action for many classic WWE moments, providing back and forth jabs that fans of the era still fondly remember today.

Behind the scenes, Bobby and Gorilla were good friends.

By 1994, Bobby Heenan transitioned to a color role with WCW. He stayed with the company close to their 2001 closure, though admitted in interviews that his experience with the WWF was much more positive. He compared the two companies as “night and day”.

When Gorilla Monsoon died on October 6th, 1999, Heenan insisted that he briefly acknowledge his friend’s passing on the following episode of Monday Nitro – despite WCW being in the midst of a ratings war with the WWF at the time. Reportedly, WCW management was against the idea, but Heenan threatened to walk out if he wasn’t allowed to mention Gorilla’s passing on air.

Paying Tribute to The Brain

Former WWE colleague, Mean Gene Okerlund comments “Saddened by the news that arrived this afternoon from Bobby Heenans daughter Jess, that he has passed. Bobby and his family have had to endure so much because of his health. Bobby Heenan was such a great friend. You don’t replace people like that. Condolences to Cyndi, Jessica, family, friends and fans. RIP Bobby.”

On Twitter, Vince McMahon noted Heenan as “one of the greatest managers and announcers in WWE history.”

One of the greatest managers and announcers in WWE history. Our thoughts are with the Heenan family. pic.twitter.com/r9A3IJlSoP

The Brain joins many other notable wrestling managers who have passed away over the last 15 years including WWF favorites Paul Bearer, Sensational Sherri, Miss Elizabeth, and Mr. Fuji.

In 2004, Bobby Heenan was inducted into his rightful place in the WWE Hall of Fame.

The fact that The Brain was able to battle such poor health for 15 years should speak to his will to fight.

Heenan leaves behind his wife Cynthia Jean and daughter Jessica.