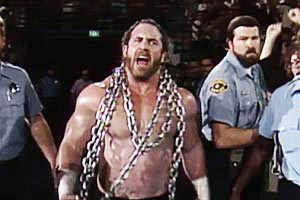 Remembering Hercules. The former professional wrestler was just 47 years old at the time of his death. photo: wwe.com

Many people might not recognize Raymond Fernandez’s name, but anyone who followed the WWF during the 1980s has seen him step into the ring under the name Hercules Hernandez – and later shortened to just Hercules.

Also a competitive bodybuilder, Hercules was known for his powerful physique, which suited his ring name.

Despite looking like a million bucks, Herc’ never broke into super stardom in the wrestling world, though he did take part in a few memorable programs that 80s wrestling fans will remember.

Struggling to Move Up the Card

Hercules Hernandez joined the World Wrestling Federation in 1985. While he was involved in a few story lines and took on some top billed talent (notably Hogan, and Warrior) he was never able to build a large fan base. Many speculate that the WWF never gave Hercules a real opportunity to shine – his matches often resulting in him jobbing to the bigger star. In the early 90s, Hercules left the WWF in hopes of making a name for himself elsewhere. He joined rival company, World Championship Wrestling where he took on the moniker of the Super Invader, hailing from Bangkok, Thailand.

His time with the WCW only ended up lasting a year, and after that, Hercules appeared at small promotions around the world. He would ultimately retire from wrestling in 1999.

A Quiet Retirement Before Death

Often, wrestlers’ death stories are filled with drug abuse and alcohol and deteriorating family situations, particularly when they retire under disappointing circumstances. The Hercules death story is very different though.

Up until his death, Raymond remained a dedicated family man. He was a devoted husband and a father to six children. He spent most of his time visiting schools, encouraging children to get good grades and avoid drugs. In addition, he would visit children with terminal illnesses to boost their spirits. Because he led a simple, wholesome life, most people were extremely shocked when Hercules died.

The Details of the Hercules Death Story

Hercules’ date of death was March 6, 2004. The former professional wrestler was just 47 years old at the time and would have turned 48 in May. Not much has been revealed about the exact details of Hercules’ death, as his family has kept the matter as private as possible. Reportedly, Hercules died in his sleep during the night in his home in Tampa, Florida, the same city where he was born. Hercules’ wife shared with the press that her husband died of heart disease, so presumably he suffered a heart attack.

Hercules’ daughter posts a tribute to her late father

Remembering the Man After the Hercules Death Story After Hercules’ death, a funeral was held for family to pay respects. In 2004, he was included in a book of tributes published by Wrestling Observer that briefly discussed his life story.

Have a comment about Hercules? Sound off in the comments section below!