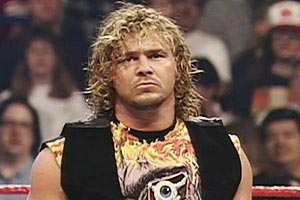 Brian Pillman – Dead at 35 from a heart attack. photo: wwe.com

Brian Pillman was an underrated wrestler. Taken much too young, Pillman had runs with virtually every popular wrestling promotion in the late 80s through the mid 90s. In WCW he teamed with a young “Stunning” Steve Austin to form the Hollywood Blonds.

By ’96, Pillman hit the WWF. Although his run was cut short due to his death, he was involved in some very memorable storylines, including the infamous “gun incident” in which Pillman is yielding a handgun at his home while waiting for the uninvited arrival of “Stone Cold” Steve Austin.

5 years before his death: “Flyin'” Brian Pillman takes on Shane Douglas on an episode of WCW Saturday Night (October 17, 1992)

The Cost of Trying to Get Chiseled

The beginnings of the Brian Pillman death story happened well before the actual date of his death. Years after he passed away, Brian’s widow, Melanie King, spoke to news outlets regarding her husband’s time with the World Wrestling Federation. She revealed that Brian felt pressure to have a leaner, more chiseled physique. As a result, he was spending more than $1000 every month on growth hormones, chemicals that have an even more dramatic bulking effect than steroids and that are very hard on the body.

Melanie also told reporters that Brian was taking pain pills that a doctor illegally prescribed for him and that he used herbal supplements that contained ephedrine to try and reduce his amount of body fat. The combination of the stimulants in the supplements, the harsh effects of the hormones and the tranquilizing effects of the pain pills no doubt put a strain on the wrestling superstar’s heart, setting him up for his untimely demise. Pillman was involved in one of the most controversial storylines in WWF’s Attitude Era. With “Stone Cold” Steve Austin on the way to his home, the appropriately nicknamed “Loose Cannon” pulls out a firearm. photo: wwe.com

Brian Pillman’s date of death was October 5, 1997. The date also happened to be that of a major WWF pay per view – Badd Blood: In Your House. Brian was set to appear in the ring against Dude Love, but he failed to arrive at the set. WWF representatives contacted the hotel where Brian was staying and received word that the hotel maids had found him dead in his room earlier that afternoon.

The coroner discovered that Brian Pillman had heart disease that he did not know about and had died from a heart attack. Cocaine was found in his system and is believed to have been partially responsible for his death.

Brian Pillman was cremated. Half of his ashes were given to his wife Melanie. The other half was given to Steve Austin.

The day after Brian Pillman died, his then estranged wife Melanie King gave an interview with Vince McMahon, talking about her family. Although at the time, she seemed friendly with the WWF, Melanie has since revealed that she felt pressure to give the interview in order to receive a payment from the federation to help provide for her children. During interviews in the years that followed, she has expressed a belief that the WWF was at least partially responsible for Brian’s death due to the big demands that they placed on the wrestler.

After the Brian Pillman Death Story: Remembering the Wrestler

From 1998 to 2001, Brian Pillman was remembered at the annual Brian Pillman Memorial Show, a charity event that raised proceeds for his children. Fans still remember Pillman to this day, and he has been featured in a number of wrestling video games, including the 2015 game WWE 2K16. His feud with Stone Sold Steve Austin, particularly when he pulled out a gun on a 1996 episode of Raw, is often cited as marking the unofficial start of the WWF’s Attitude Era.

Have a comment about Brian Pillman? Sound off in the comments below!