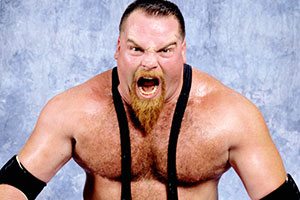 The Pasco, Florida Sheriff’s Office stated “preliminary information indicates that [Neidhart] fell at home, hit his head, and succumbed to his injury. No foul play suspected. No additional information to release at this time.”

WWE issued a statement, noting “Neidhart last competed in WWE in 1997 but his legacy lives on today through his daughter, Natalya, who displays her father’s signature charisma and toughness every time she steps in the ring. WWE extends its condolences to Neidhart’s family, friends and fans.” The Hart family. If you are fan of professional wrestling, you are very familiar with this family as they are like royalty when it comes sports entertainment.

It all started with Stu Hart, the patriarch, who personally trained this successful family in the legendary “dungeon” in Calgary.

In addition to his own offspring, Stu trained such prolific performers as Chris Benoit, Edge, Christian, and Chris Jericho – just to name a few.

The Hart family themselves certainly were no slouches. Bret “The Hitman” Hart and Owen Hart are of course direct descendants of Stu and Helen Hart, while both The British Bulldog and Jim “The Anvil” Neidhart married into the family. The four interacted in wrestling storylines for the better part of their careers.

We all know the story with Bret Hart, long regarded as one of the best and most successful wrestlers of not only his era, but of all time.

Owen Hart certainly has the same kind of praise, albeit with less wrestling accolades than his older brother, Bret. Jim Neidhart with his daughter (and current WWE wrestler) Natalya

The British Bulldog went from being the consummate tag team specialist when partnering with The Dynamite Kid in the 80’s, to frequenting WWE main events worldwide in the 90’s.

Most of Stu and Helen’s other children have had successful runs with their own promotion (Stampede Wrestling) and their own wrestling schools in Canada. Right along in the same era with the aforementioned stars, was Jim “The Anvil” Neidhart, who certainly had a very successful career in his own right – but probably owns the distinction of being the least successful of that quartet (Bret, Owen, Davey Boy Smith).

Hardly a slight, though, when being compared to talents as distinguished as those men. That’d be like saying Andy Garcia was the 4th best known male cast member of Ocean’s Eleven. Few would dispute that fact, yet I don’t think either would be bothered by being ascribed that credit. 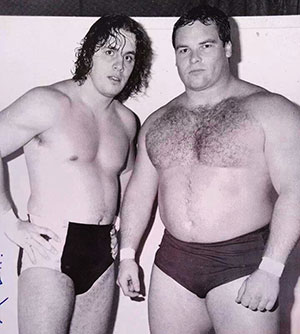 Jim Neidhart was a standout athlete in his early years. In high school he was very successful in strength-oriented events in track and field and nearly landed on an NFL roster, having gone through training camps and preseason games with both the Dallas Cowboys and Oakland Raiders. He was ultimately unable to latch on with an NFL roster long term, though, so Neidhart turned his attention to professional wrestling.

Neidhart began his wrestling career with Stu Hart’s Stampede Wrestling, working there from 1978-1985. It was during this time that Jim met his wife, Ellie Hart, one of Stu and Helen’s daughters. There was an event at the Calgary Stampede around this time that Neidhart entered into as an attempt to receive some publicity. He won his event, which was an anvil throwing contest – thus earning his nickname “The Anvil”.

In 1985, Stu Hart sold Stampede Wrestling to Vince McMahon, and as part of the deal, Bret, Owen, Davey Boy Smith, and Neidhart would all go to work for WWE. 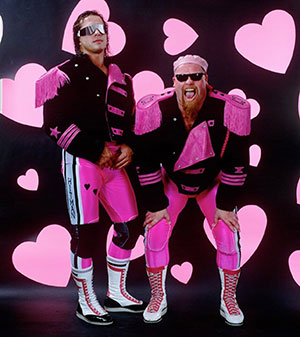 Bret and Jim began working a feud against each other for their first few weeks with the WWE (then “WWF”), but Bret was upset with a “cowboy” gimmick that was assigned to him, so he requested to be partnered with Neidhart. This was the creation of the tag team, The Hart Foundation, a team that went on to great success.

The Hart Foundation debuted at WrestleMania 2 – nearly winning a 20 man battle royal – and they never looked back.

The duo won two tag team championships and are considered one of the greatest teams to ever wrestle for WWE. They were broken up in 1991, due mainly to creative wanting to give Bret Hart a singles push.

Neidhart would briefly tag with Owen Hart, creating The New Foundation, but very little traction was gained with this run and Neidhart left the company in 1992.

Jim bounced around a few different organizations after leaving WWE – including New Japan, WCW, and ECW. He made his return to WWE in 1994, immediately assisting Bret Hart upon his arrival.

Neidhart did very little in ways of his singles career, but rumor has it that the original plans were for Neidhart and Owen Hart to team together again and win the Tag Team Titles at WrestleMania 11. Allegedly Jim missed some events and Owen ended up partnering with Yokozuna to win the titles.

Return to the WWF during the Attitude-era

Jim “The Anvil” Neidhart returned to the WWF in 1997 and once again was paired with his Hart brethren, when he joined the heel stable, The Hart Foundation. The group itself had great success, but its primary focus was Bret Hart’s ongoing feuds with the likes of Steve Austin and Shawn Michaels (and America in general for that matter). 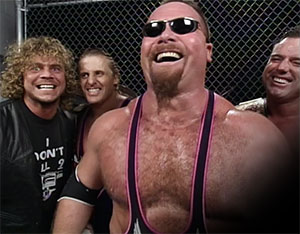 Jim Neidhart with the last incarnation of The Hart Foundation (1997). Sadly, all four men in this photo are no longer here. From left to right: Brian Pillman, Owen Hart, Jim Neidhart, and “The British Bulldog” Davey Boy Smith. photo: wwe.com

Neidhart left with Bret Hart and The British Bulldog to WCW in 1997 after the infamous “Montreal Screwjob”. It was reported that all three received substantial contracts from WCW, but “The Anvil” and Bulldog were rarely utilized, making limited TV appearances.

Jim was occasionally working the independent circuit throughout the early 2000s, while maintaining a career in real estate.

In 2007, Anvil participated in WWE’s 15th Raw Anniversary Battle Royal. He also made frequent appearances on the television show Total Divas – a show in which real life daughter and wrestler Natalie (Natalya in WWE) is a cast member.

For all intents and purposes, Jim “The Anvil” Neidhart had a very prosperous career in professional wrestling.

Jim “The Anvil” Neidhart died on August 13th, 2018. Reports indicate he suffered a fall inside his Florida home.

“He got up (Monday) morning and went to lower the temperature on the air conditioner and he just collapsed and I think died pretty quickly,” Ross Hart said. “I thought this was stemming from Alzheimer’s which he’d been battling for some time. It’s a struggle he’s been going through.” 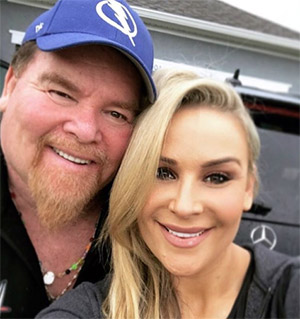 Less than one month prior to his death: Jim Neidhart poses with his daughter (current WWE superstar) Natalya. July 18, 2018. photo: @natbynature / instagram

“I can’t put into words how hard it is going to be for myself and our family to have to say goodbye to my dad. He meant the world to us, and nothing will ever replace the special times we shared together as a family. My dad was always a fighter and an incredibly special person. There was no one like him! I’m just gonna miss him so much. We are going to hold all of the moments we had with him close to our hearts forever and never let them go. I promise to keep your memory alive. We love you so much, Daddy! On behalf of my entire family, we would also like to personally thank everyone for the outpouring of thoughts and prayers. It’s meant so much to us.”

Our condolences to the friends and family of Jim Neidhart. 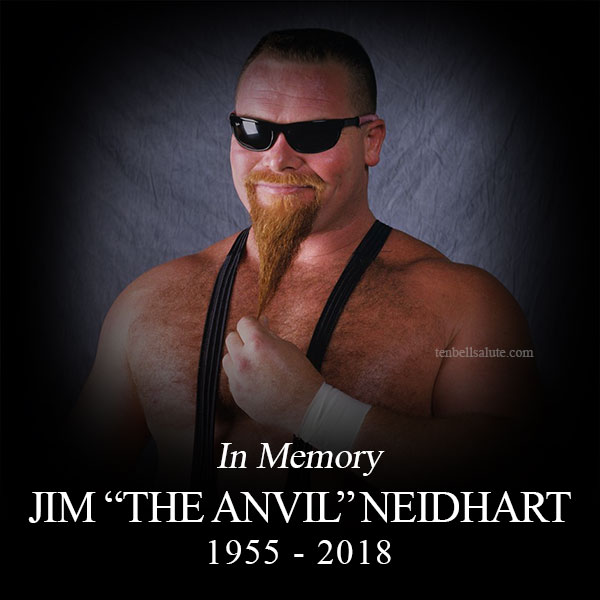