Peter Maivia, legendary elder in the Anoa’I wrestling dynasty distinguished himself during his life as one of the toughest men in the business, a top star, and a warm human being.

Although the Samoan native only lived to 45, he passed on a rich legacy that few could have anticipated.

Leifi Pita Maivia Fanene was born on April 6, 1937 in America Samoa, living there until he moved to New Zealand, where he made his professional wrestling debut.

He found championship success in New Zealand and Australia during the early years of his career. Although Maivia maintained contact with his Samoan homeland, he traveled the world, including a tour in England.

Maivia quickly established himself as a rising star and was seen as one of the first major Samoan stars in professional wrestling.

Peter Maivia’s exotic look made him a natural for Hollywood. He appeared in 1967’s James Bond film, You Only Live Twice, battling 007 in a great action scene and serving behind the scenes as the film’s unofficial stunt coordinator.

Surprisingly though, this would be Maivia’s only film appearance. However, Maivia’s appearance anticipated the future Hollywood career of his grandson, Duane “The Rock” Johnson.

Maintaining his ties with his Samoan people, Peter Maivia underwent the process of becoming a chief. This involved a very painful tattooing process.

In a 2015 interview with the Daily Mail, Maivia’s grandson, Duane “The Rock” Johnson described how “the High Chief underwent excruciating tattooing from his abdomen down to signify his position in the tribe in Samoa via traditional method – using a mallet, sharpened bone and ink – which should have taken weeks, but he had it completed in a matter of days.” By all accounts, Peter Maivia was one of the toughest men in professional wrestling, but he was also considered one of the kindest and understanding.

However, even the gentle Maivia had his limits as seen when wrestling shooter Billy Robinson decided to antagonize the Samoan star past his breaking point. Like any wrestling story, the truth has become enshrouded in rumor and innuendo, but most people agree Robinson was making fun of Maivia, particularly his Samoan heritage. The normally reserved “High Chief” had enough and put Robinson through a window. Robinson, no pushover himself, was a bloody mess but ready for more. Robinson grabbed Maivia and prepared to deliver a suplex. Robinson’s mat skills were renowned and Maivia would have been seriously injured—if not killed, if Robinson suplexed him. Maivia bit into Robinson’s cheek, tearing out a piece of skin and effectively countering the move.

Another story has it Maivia even took out one of Robinson’s eyes, blinding him in one eye for the rest of his life.

At some point, other wrestlers intervened, breaking up the real-life donnybrook. As one might suspect, Robinson’s story is different, with the AWA trainer stating he and Maivia brawled, but that he (Robinson) ultimately knocked Maivia out with a punch. 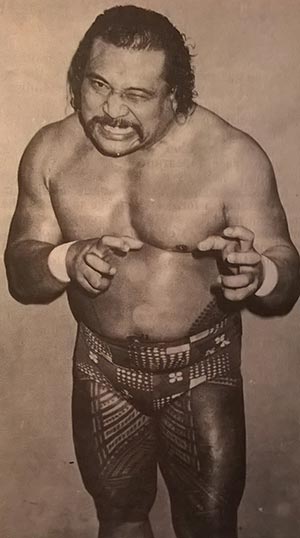 Break-out success occurred in the 1970’s when Maivia began working in the NWA San Francisco promotion run by Roy Shire. The area had a significant Samoan-American population which made Maivia quick to get over. Maivia became a top star in San Francisco. He teamed with Rocky “Soul Man” Johnson, who eventually became Peter’s son-in-law after marrying his daughter.

Maivia also traveled to Texas where he wrestled in Paul Boesch’s Houston territory for about a year.

In 1977, Maivia’s skills and reputation landed him a spot in the World Wide Wrestling Federation. There, Peter wrestled as a popular babyface, forming a team with the late “Chief” Jay Strongbow.

The two competed for the WWWF Tag Team Championship, and while they came close to winning the belts, the tag team gold eluded them.

Maivia also battled WWWF champion “Superstar” Billy Graham for the belt. Although Maivia could not wrest the belt from Graham, he proved a formidable opponent.

In 1978, Peter Maivia shocked the wrestling world when he turned heel on WWWF champion Bob Backlund.

After his run in the WWWF, Maivia worked in Los Angeles, as well as New Zealand where he wrestled Harley Race for the NWA World Heavyweight Championship.

In 1980, Peter and his wife Lia moved to Hawaii where they began operating the NWA Hawaii territory. The couple were enjoying success when the unthinkable happened.

Peter Maivia was diagnosed with inoperable cancer in 1981. In hindsight, the affliction was all the more tragic because Peter Maivia reportedly ignored the symptoms and his friends and family’s admonitions to see a doctor. In 2008, “High Chief” Peter Maivia was inducted into the WWE Hall of Fame.

The 1980s also marked the passing of many other notable wrestling stars including Adrian Adonis, Bruiser Brody, David Von Erich, and Gino Hernandez.

Have any memories of High Chief? Share them in the comments section below.