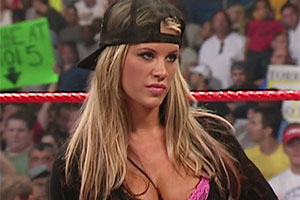 While Ashley Massaro only worked in the WWE from 2005-2008, she left her mark on the promotion, its fans, and her fellow workers. As short as her WWE career was, she accomplished much in 3 years including guest appearances on television and in music videos, along with a well-received Playboy pictorial.

Massaro graduated with a Bachelor of Science degree in Communication with a minor in Business from the State University of New York.

In 2005, Massaro entered the WWE’s Diva Search competition, defeating 7 other finalists to earn a one-year WWE contract. On August 15, 2005, she was declared the winner and quickly thrust into the ring.

A Short but Successful Career

Despite her inexperience, Massaro worked a number of matches, including program against “Vince’s Devils” (Candace Michelle, Victoria, and Torrie Wilson), teaming with Trish Stratus. Massaro battled Mickie James during James’ stalker storyline with Trish Stratus. However, on January 20, 2006, Massaro suffered a broken leg, which required surgery.

In addition to competing in the ring, Ashley served as Brian Kendrick and Paul London’s valet, occasionally teaming with them in 6-person mixed tag team matches. Her WWE celebrity status led to a 2007 Playboy cover and pictorial, television appearances (Smallville, Extreme Makeover: Home Edition, and Survivor: China), and appearances in 2 music videos (Timbaland’s “Throw it On Me” and “Hell Yeah!” by Rev Theory).

Although Massaro never won WWE gold, there’s no telling how her career could have played out if she hadn’t left the company in July 2008, with Massaro stating she’d asked for her relief in order to care for her sick daughter, Alexa. Ashley Massaro never returned to the ring until a brief appearance in 2017 for the Zero1 Professional Wrestling USA promotion. 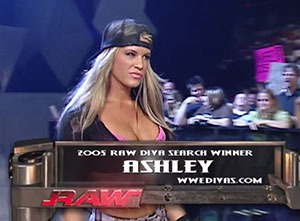 Ashley Massaro makes her entrance on an episode of Monday Night Raw in August of 2005. photo: wwe.com

Accomplishments but at What Cost?

While Ashley enjoyed success in the WWE, it seems to have come at a tremendous cost to her physical and mental well-being.

According to the Boston Globe, the 2005 Diva Search winner, “alleges she suffered several concussions, including one that rendered her unconscious for five minutes in the ring, while she performed for the company from 2005 to 2008. Massaro says she received no care after she was knocked out and alleges she was told to ‘shake it off’” and her in-ring injuries “also included a hairline fracture of her spine, two herniated disks, and an ankle fracture that required the insertion of a five-inch metal plate to repair.”

Massaro was one of over fifty former WWE Superstars who participated in a class-action lawsuit against the WWE which argued that the corporation withheld information to its wrestlers on the effects of concussions. The case was dismissed in 2018.

According to an article in The Nation, “Massaro also said that in her post-WWE life, she had been dealing with bouts of depression, mood swings, drug addiction, and other familiar side effects of repetitive head trauma.”

The Company Takes Care of Me

In 2006, Ashley Massaro joined several WWE Superstars in a trip to visit U.S. military personnel in Kuwait. Before she left for Kuwait, Ashley commented at WWE.com that “Anything can happen going over to the Middle East. But my company takes care of me, and I trust them. I have full faith that I will come back exactly the way I left, if not a little bit better in the heart.” Ashley Massaro in the ring on an August 2006 episode of Smackdown. photo: wwe.com

Tragically, that was not the case.

In a lawsuit filed against the WWE, Massaro alleged that she was raped while participating in the tour of the military base. According to court documents:

“Upon her return to the United States, she was seen by Dr. Rios who interviewed her about the incident. Dr. Rios reported the incident to WWE executives who soon thereafter met with Massaro to apologize for their negligence but persuaded her that it would be best not to report it to appropriate authorities.”

The WWE issued a statement after Massaro’s death stating:

“WWE is saddened by the death of Ashley Massaro, and we reiterate our condolences to her family. However, we regret that her attorney Konstantine Kyros, who filed multiple cases against WWE, lost all of them, and was sanctioned multiple times by the Court for repeated misconduct and false allegations, is using Ashley’s death to further his malicious campaign against WWE by releasing an affidavit that she submitted to the Court and later apologized to WWE for being involved with, so we wish to make certain things crystal clear.

At no time was Vince McMahon or the management of WWE ever informed by Ashley Massaro or anybody else that she had been sexually assaulted, drugged, raped or sodomized by a military doctor with a nurse standing guard while on a goodwill tour in 2007 to U.S. military bases in Kuwait. In fact, if she ever articulated such a claim to WWE, we would have reported it immediately to the Base Commander. At no time was there ever a meeting with Vince McMahon, Kevin Dunn, John Laurinaitis or other company executives in which she told them of such a claim and was instructed to keep it quiet.” 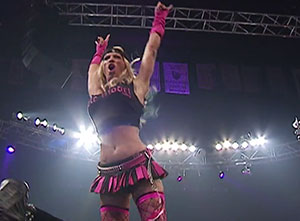 The wrestling world was shocked when they learned that Ashley Massaro had died on May 16, 2019 at the age of 39, just days before her 40th birthday. According to TMZ:

Ex-WWE superstar Ashley Massaro was found hanging in an apparent suicide, multiple sources connected with the situation tell TMZ Sports. The 39-year-old was found unconscious inside of her Suffolk County, NY home early Thursday morning — and she was transported to a nearby hospital where she was later pronounced dead. The death is being classified as “non-criminal.”

Despite the TMZ story, no official cause of death has been released. In a report with HollywoodLife, the Suffolk County Police Department PIO issued the following statement:

Ashley’s Friends Rally for Her One Last Time

Ashley Massaro is survived by her daughter Alexa.

Following the news of Ashley’s passing, a group of Ashley’s colleagues known as “The Squared Circle Sisters” launched a GoFundMe page to raise money for Alexa’s college education. The drive exceeded its goal of raising $100,000 for Alexa, a testament to Ashley’s lifetime impression on those she worked with. Legendary hardcore wrestler, Mick Foley played a large part in the success of the fundraiser, bringing in over $40,000 alone through the sale of a limited edition Cactus Jack tshirt design.

Several other notable names from the wrestling world have passed in 2019 including King Kong Bundy, Pedro Morales, and Mean Gene Okerlund.

What are your favorite memories of Ashley Massaro? Leave your comments below.