Nick Bockwinkel enjoyed a long and successful career in Verne Gagne’s American Wrestling Association (AWA), boasting tag team and singles world championships. Working as a cocky scientific heel, Bockwinkel taunted fans with his expansive vocabulary and uncanny ability to steal victory from certain defeat. Outside the ring, he was respected by his peers and the industry, lending prestige to any project he worked on.

Nick was born on December 6th, 1934, the son of pro wrestler Warren Bockwinkel. Nick attended the University of Oklahoma on a football and wrestling scholarship until a knee injury ended his football career. Undaunted, Nick trained under his dad along with talented wrestlers such as Lou Thesz, Lord James Blears, Gene Kiniski, and Wilbur Snyder. Although he was drafted into the army in 1958, he still found time to wrestle.

Wrestling is known for its stereotypical characters, ranging from foreign menace heels to cocky heels. Bockwinkel distinguished himself by employing scientific wrestling until a situation called for bending or breaking the rules. Bockwinkel’s interviews were subtly different too. Bockwinkel spoke with a calm and ease that set him apart from heels that screamed and hollered. He became known for his use of polysyllabic words (wrestling lore has it that Bockwinkel kept several dictionaries with him during his travels so he could expend his vocabulary).

Bockwinkel infuriated fans with his condescending talk and hundred-dollar-words.

Climbing the Ladder to Success 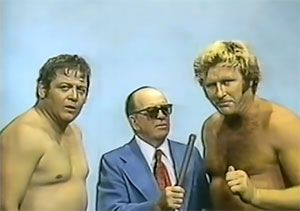 Verne Gagne’s AWA was where Bockwinkel’s hard work began to pay off. However, things didn’t start off well. The Pro Wrestling Hall of Fame: The Tag Teams discusses Bockwinkel’s struggles to get over as a heel. That changed when he was paired with veteran grappler Ray Stevens and manager “Pretty Boy” Bobby Heenan.

The Bockwinkel/Stevens team became renowned, winning the AWA World Tag Team Championship three times. Bockwinkel even dabbled in Hollywood, appearing in an episode of The Monkees and the original Hawaii Five-O. The ever-competitive grappler even served as a contestant on the game show Hollywood Squares.

On November 8, 1975, Nick Bockwinkel reached the top of the AWA mountain, defeating Verne Gagne for the AWA World Heavyweight Championship. Bockwinkel was a wily champion, utilizing the disqualification rule to keep his belt when challengers threatened his belt (Bockwinkel would get himself disqualified, knowing the title could not change hands on a disqualification). He also could count on help from the other members in the Bobby Heenan Family when things got tough in the ring. Bockwinkel battled the AWA’s crème de la crème as well as wrestlers in other promotions including Jim Crockett Promotions, All Japan Pro Wrestling, and Maple Leaf Wrestling where he fought WWWF Champion Bob Backlund in an inconclusive title vs. title bout. Bockwinkel’s skills and drawing ability led to him being considered as NWA World Heavyweight Champion, but he reportedly turned it down because the AWA paid better for less appearances.

After Verne Gagne retired from the AWA active roster in 1980, Bockwinkel continued his role as the AWA’s heel champion, defending the belt against veterans and newer stars such as Hulk Hogan and Rick Martel.

As the 80’s continued, Bockwinkel remained a main eventer, but the AWA itself was dying. Like many of his colleagues, Bockwinkel left the company for the WWF; in his case working as a road agent and color commentator.

Already a legend, Nick was a recurring figure in wrestling. After the WWF’s budget cutbacks led to his departure, Bockwinkel was seen in WCW, working its 1993 Slamboree: A Night of Legends show. There, he wrestled former NWA World Champion Dory Funk Jr. to a draw.

The next year, he began working in WCW as a storyline commissioner.

In 2000, he worked a similar role for the short-lived Japan Pro Wrestling Association and in 2007, the Cauliflower Alley Club elected him president. In 2007, the WWE inducted him into its Hall of Fame and in 2010, the seemingly always in-demand veteran served as a lumberjack in a Legends Lumberjack Match on Monday Night RAW.

Considered by many as the AWA’s greatest world champion, Bockwinkel battled health issues later in life. In 2009, he underwent triple bypass heart surgery.

Nick Bockwinkel died on November 14, 2015 at the age of 80. The New Year Daily News noted “undisclosed causes” for his death.

According to Slam! Sports, Bockwinkel had been battling memory issues before his death.

Bockwinkel was cremated in Las Vegas, Nevada. He was survived by his two daughters from his first marriage.