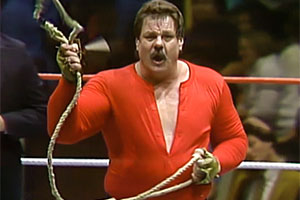 Blackjack Mulligan – Dead at 73. Here he is on a 1986 episode of Prime Time Wrestling. photo: wwe.com

Blackjack Mulligan, real name Robert “Bob” Windham, enjoyed a storied life and career, and not just in the wrestling ring. Mulligan played football in college, and had tryouts for several NFL teams in the mid 60s.

After football, Mulligan moved to wrestling, debuting in the AWA, and eventually moving over to the WWWF (now WWE) where he was managed by the late Grand Wizard.

Mulligan is most remembered for his run with tag partner Blackjack Lanza, where they formed The Blackjacks.

The Blackjacks had an impressive run throughout the 70s with the WWWF, winning tag team gold in 1975. Mulligan’s profile would continue to shine in the upper card, feuding with Andre the Giant.

In the mid 80s, Mulligan moved over to Jim Crockett Promotions, notably teaming up with Dusty Rhodes to win the NWA U.S. Tag Team Championship.

The father of Kendall and Barry Windham, and grandfather of Bray Watt and Bo Dallas, Mulligan’s family connections to wrestling run deep.

His son in law is Mike Rotunda, better known as I.R.S. during his WWF run in the early 90s.

Blackjack Mulligan was inducted into the WWE Hall of Fame for 2006’s ceremony. 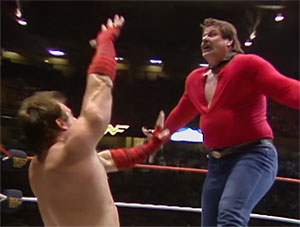 In a fairly surprising twist, less than 10 years later, Windham would end up suing the WWE for concussions he sustained while working. The suit is not unlike (and is possibly directly related to) the 2016 concussion suit against the WWE in which 50 former wrestlers are named.

Blackjack Mulligan’s cause of death hasn’t been revealed, although it’s clear his health was suffering in recent years. Mulligan suffered a heart attack in June of 2015. According to PWInsider, Mulligan was set to undergo brain surgery prior to his heart attack.