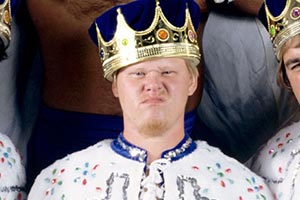 Larry Gibson, known for his role as “King Cheesy” at the ’94 Survivor Series, passes away. photo: wwe.com

King Cheesy, the ring name of one of Jerry “The King” Lawler’s dwarf teammates at the ’94 Survivor Series, has passed away.

Outside the ring, King Cheesy was known to family and friends as Larry Gibson.

No official cause of death has been revealed and little information in general is publicly known about Larry Gibson’s wrestling career.

Unless our sources are incorrect, it appears Jim Ross incorrectly refers to Cheesy as “Sleazy” in this video from 1995

We did receive a note from indie wrestler Jock Samson. Samson notes:

“[Larry] lived in West Virginia around Charleston the last time I spoke to him. Really nice guy!! Didn’t know much about him other than in passing at shows down there.”

King Cheesy at the 1994 Survivor Series “The Royal Family” team from the 1994 Survivor Series. King Cheesy is pictured on the far right. photo: wwe.com

At the 1994 Survivor Series, King Cheesy competed alongside Jerry Lawler, and dwarf wrestlers Queasy and Sleazy, collectively forming The Royal Family. The Royal Family competed against Clowns R’ Us, a team consisting of Doink the Clown, Dink, Pink, and Wink.

At the time of the matchup, Doink was being portrayed by Ray Apollo, and not Matt Osborne, the latter of whom passed away in 2013 from a drug overdose.

Jump to the 1:20 mark for a brief glimpse at the ’94 Survivor Series matchup featuring King Cheesy

Although the narrator in the video above is a bit harsh on the match itself, it’s important to note that the match was intentionally being used for comedy purposes. In the mid 90s, the WWE’s target audience was largely children.

Condolences to the friends and family of Larry Gibson.