Peterson worked in the territory system throughout the 80s as national promotions such as the WWF and Jim Crockett Promotions cornered the wrestling market in the United States. He was most notably associated with Texas All-Star Wrestling and NWA Central States.

The Right Place at the Right Time

A capable performer, Peterson had the physique promoters sought after. The 1980s was a time of change for the wrestling industry as more promoters believed bigger was better after the success of musclemen, including Hulk Hogan and The Road Warriors (Animal and Hawk). 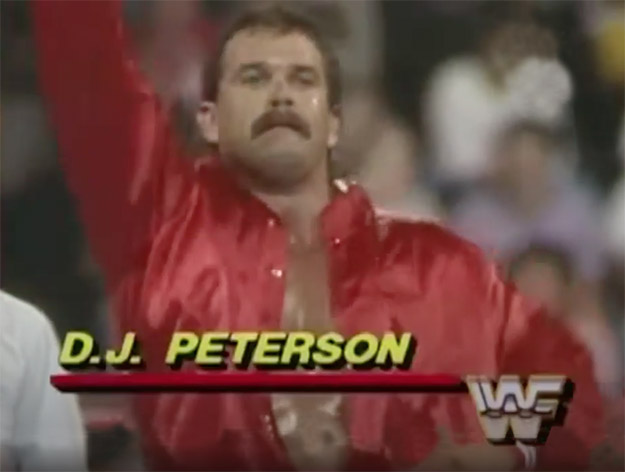 5 years prior to his death, D.J. Peterson enters the ring for a bout with Hercules. (WWF Prime Time, August 1988)

The wrestling world was in a state of flux as smaller territories folded while larger ones thrived, making it a buyers’ market for promoters seeking talent.

DJ Peterson rubbed elbows with many stars winding down their careers, such as Ox Baker, and a cavalcade of rising stars like Sting, The Big Bossman, and Rick Steiner. Throw in other stars such as The Fabulous Freebirds (Terry Gordy, Michael “P.S.” Hayes, and Buddy Roberts) and Peterson’s wrestling resume read like a “Who’s Who” of the squared circle.

Peterson found championship success in singles and tag action, including a run as TV Champion in World Class and one with the AWA World Tag Team Championship when he teamed with the Trooper (aka The Patriot).

After the AWA went out of business, DJ Peterson hit the indie scene, working there before he died in a motorcycle crash on May 25, 1993 at the young age of 33. Given the crash was three decades ago, the only information we were able to source was via Gary Will’s website, which is no longer online.

Other pro wrestlers who died in 1993 include Andre the Giant, Dino Bravo, and Kerry Von Erich.

What are your favorite memories of D.J. Peterson? Let us know in the comments below.