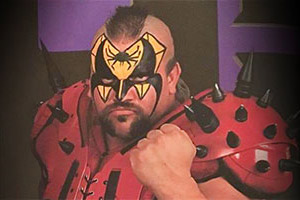 WWE Hall of Famer Joe Laurinaitis, better known to wrestling fans as “Road Warrior Animal” has died. He was 60.

Joseph Laurinaitis’ career proved not only the power of being in the right place at the right time, but that success isn’t just opportunity, it’s what you do with it. When fate brought Laurinaitis and Michael Hegstrand together as the hastily assembled team of Animal and Hawk (aka the Road Warriors), they parlayed the opportunity into one of the biggest careers in professional wrestling, breaking records and breaking the bank. 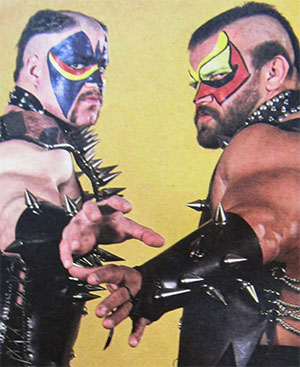 Joseph Laurinaitis was born on September 12, 1960. One of three children (his brothers John and Marcus would later become professional wrestlers), Joseph befriended Michael Hegstrand, but the two went their separate ways when a move prevented them from attending the same school.

Thankfully, the two reunited when they ran into each other at a local gym and their fondness for bodybuilding (as well as their jobs as bouncers at a local nightclub) led to them pursuing careers as wrestlers. The two trained at Ed Sharkey’s wrestling school and went their separate ways again, with Hegstrand working in Canada and Laurinaitis heading to Georgia.

John Laurinaitis worked in Georgia Championship Wrestling where booker Ole Anderson gave him a biker gimmick. When Ole hired Michael Hegstrand, Anderson planned on pitting the two big men against each other.

However, a twist of fate instead united the two after Anderson was forced to split a tag team due to one of its members’ legal problems. The future founding member of the Four Horsemen christened Laurinaitis and Hegstrand as Animal and Hawk, naming the team the Road Warriors. Mid-South Wrestling promoter Bill Watts suggested Anderson add face paint to the team and things began to take shape. The Road Warriors had a great look with their leather attire, face paint, and powerful physiques. The only problem was that neither man had much experience in the ring. Ultimately, that proved to be helpful for the team as Anderson booked them in squash matches where they destroyed their opponents, making them look dominant and eventually unbeatable.

Animal and Hawk were paired with “Precious” Paul Ellering who worked in a role unlike most wrestling managers. Ellering served as the Road Warriors manager in front of the camera, but he also helped Animal and Hawk book good deals and manage their money, something they would soon be making hand over fist.

The Road Warriors maintained a stranglehold on Georgia’s tag team division, winning its National Tag Team Championship several times and defeating some of the biggest teams in the area.

A Team in High Demand

Gagne had lost a number of big stars to the WWF including Hulk Hogan and was eager to bring in a top draw. The Road Warriors were a fantastic addition to the AWA and helped hide the AWA’s over-reliance on older stars.

The Road Warriors entrance music (Black Sabbath’s “Iron Man”) only added to their Fonz Factor and despite being booked as heels, AWA fans soon embraced the team. The Road Warriors quickly won the AWA World Tag Team Championship, one of many tag team titles they would hold and their first world championship.

The wrestling world couldn’t get enough of Animal and Hawk and they toured Japan, earning top dollar in All Japan Pro Wrestling.
Other promotions came calling and in 1986, the Road Warriors signed with Jim Crockett Promotions, winning the Jim Crockett Memorial Tag Team Tournament and later, the NWA World Tag Team Championship.

The Road Warriors became one of Crockett’s most popular teams, so much that when booker Dusty Rhodes tried turning them heel, the fans refused to boo them and they were quickly turned back.

The Road Warriors wrestled in the 1980s, an era often called “The Second Golden Age of Tag Team Wrestling.” The 1980s saw a host of talented teams ranging from the British Bulldogs to the Rock-and-Roll Express to the Midnight Express to the Hart Foundation to the team of Arn Anderson and Tully Blanchard (to name a few).

However, no team was as big a draw as the Road Warriors and they remained in high demand wherever they went, be it North America or Japan.

Professional wrestling is about more than just technical skill and while there were certainly faster and more technically-skilled teams than the Road Warriors, Animal and Hawk’s size, look, and mystique made them the kings. After a successful run in two of North America’s biggest promotions, it was time for the Road Warriors to work in the WWF.

Rocco was a bad omen for the WWE as Hawk quit the promotion in 1992, leading to Animal teaming with Crush for a short time.

Things only worsened as an in-ring injury to Laurinaitis’ back seemed to mark the end of his career.

Thankfully, Animal had obtained a Lloyd’s of London insurance policy and collected on it for the money he lost from his inability to wrestle. In the meantime, Hawk teamed with Kensuki Sasaki in New Japan Pro Wrestling.

Animal recovered from his injury and in 1996, the Road Warriors returned to action, this time working in WCW at the height of the Monday Night War. The Road Warriors competed for the WCW World Tag Team Championship but came up short and it was clear they were no longer the dominant team they’d once been.

A return to the WWF in 1997 offered Animal and Hawk opportunity to showcase their skills, but the WWF seemed more intent on using the Legion of Doom to help get younger teams over, such as the New Age Outlaws.

The LOD was repackaged as LOD 2000 with Darren “Puke” Drozdov joining the fold, and Sunny managing them. The gimmick would prove to be short-lived. The Legion of Doom repackaged as “LOD 2000” with Road Warrior Animal (right) and Darren “Puke” Drozdov.

Things only worsened for the LOD when the WWF paired them with Puke and began a controversial storyline that played up on Hawk’s past problems with drugs and alcohol. Animal and Hawk were disgusted by the storyline and left the WWF.

Following their WWF run, Animal found himself on his own as Hawk dealt with health issues. However, in 2001, both Animal and Hawk became born-again Christians and began working together on the Christian wrestling circuit and later, in TNA-Wrestling.

Animal and Hawk returned to the WWE in 2003, battling World Tag Team Champions Kane and Rob Van Dam unsuccessfully for the belts. Although the WWE didn’t sign them, Animal and Hawk continued working together.

Hawk’s unexpected 2003 death from a heart attack at age 46 meant the Road Warriors team was over, but Animal continued wrestling and in 2005, he returned to the WWE, teaming up with Heidenreich to win the WWE Tag Team Championship. The tandem became a new “Legion of Doom” but it was clear that this version was a pale imitation.

The WWE released Animal in 2006, but he continued making appearances including two WWE appearances in 2012 and a 2016 appearance at TNA’s “Total Nonstop Deletion.”

In 2011, the WWE inducted the Legion of Doom into the WWE Hall of Fame, with Paul Ellering and Animal remembering their team including Hawk. On Tuesday September 22, 2020, Joe Laurinaitis passed away. According to a report by TMZ Sports:

Law enforcement tells us, the wrestling legend — who was one half of the famous Road Warriors tag team — passed away at Tan-Tar-A Resort in Osage Beach, MO. We’re told cops received a call at around 11:49 PM from Laurinaitis’ wife … but when deputies arrived on scene — emergency personnel had already declared the ex-wrestler deceased.

It was later revealed that Road Warrior Animal died from a sudden heart attack.

Other wrestling names to pass in 2020 include Kamala, Howard Finkel, Rocky Johnson, and Shad Gaspard.

What are your favorite memories of Road Warrior Animal? Let us know in the comments below.