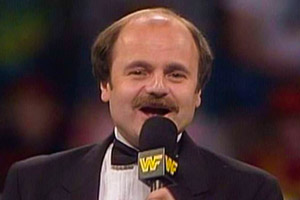 Finkel (or “The Fink” as many fans from the 80s and 90s will fondly remember him by) was the first employee hired by the WWE. He was hired by Vince McMahon Sr. in 1975. At the time, the company was known as the “WWWF” – World Wide Wrestling Federation.

Howard Finkel’s booming voice to introduce 80s stars like Hulk Hogan and the Ultimate Warrior will not soon be forgotten. Many regard Finkel as the greatest pro wrestling ring announcer of all time.

A Long and Storied Career Not only the voice of a wrestling generation, Finkel found himself in the middle of WWE storylines on a number of occasions.

Whether it was accepting a bribe from “The Million Dollar Man” Ted Dibiase, feuding with manager Harvey Whippleman, or even assisting X-Pac in his feud against Jeff Jarrett back in ’99 during the height of the Attitude-era…

The Fink was beloved enough by fans that it somehow just worked to have him woven into the occasional storyline.

Howard Finkel was honored with an induction into the WWE Hall of Fame in 2009. The Fink was inducted by fellow mic-legend, Mean Gene Okerlund, who passed in 2019. 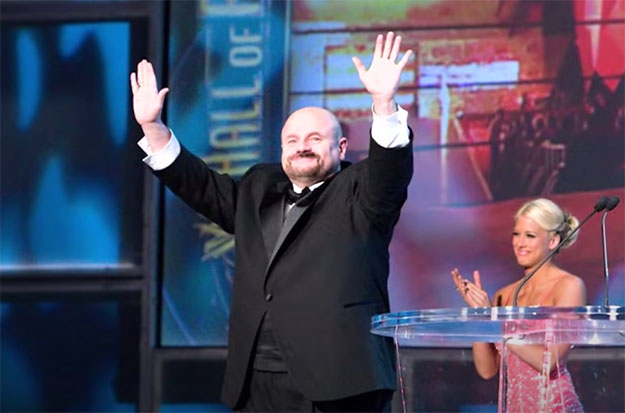 Legends on the mic: “Mean” Gene Okerlund and Howard “The Fink” Finkel

By the early 2000s, Finkel was seen less and less on WWE television, although he did come back for special occasions.

Finkel was CM Punk’s “special guest ring announcer” for the 2011 Survivor Series, to which he received a huge ovation from the Madison Square Garden crowd.

In January of 2018, The Fink lent his pre-recorded voice for the Undertaker’s entrance at Raw’s 25th anniversary special.

As of 2018, Finkel was still working for the WWE, albeit in a backstage capacity.

According to WrestlingInc, he had a daughter named Anastasia with long-time partner, Megan McCarthy.

A cause of death has not been made public.

In 2018, it was reported that Finkel suffered a stroke, and was not in great shape.

From a July 2018 episode of his Dinner with the King podcast, Jerry Lawler stated: “I just heard not long ago that Howard is in really, really bad health. Not good at all. He may have had a stroke. I’m not sure but I just know that he’s not doing well.” On the April 17th, 2020 edition of Sirius XM’s Busted Open, Tommy Dreamer disputed that Finkel had suffered a stroke in 2018:

“Howard did not have a stroke. Howard had a rare genetic brain disease. His brain was shrinking… he was slowly losing his mind. He had stroke-like systems but he kept falling because of his brain. I didn’t post pictures of us on social media. I took them all the time I would visit him, but Howard had such pride. He didn’t want the people to know that he was sick. He didn’t want people to feel sorry for him. He was literally just sitting there watching the Mets game until it was time to watch wrestling. I posted a picture last night on social media and everyone kept hitting me up about the note over my shoulder. I went back and I looked, and this was when Howard was in a bad state. Howard’s medical note above my shoulder said, ‘please put channel 43 on at 8 p.m. on Monday Nights. Wrestling is on.’ That was his medical note. He loved us. We were his family. That’s all he had. He loved performing in front of the fans and he loved us, unconditionally.”

Our condolences to the friends and family of Mr. Finkel.

So sad to hear of the passing of my friend, the greatest ring announcer in the biz, Howard Finkel, at the age of 69.

The Hall of Famer is now ring announcing in Heaven. #RIPFinkNo one was more loyal or loved pro wrestling more than The Fink. 🙏— Jim Ross (@JRsBBQ) April 16, 2020

Saddened to learn of the passing of my friend and WWE’s first employee, WWE Hall of Famer Howard Finkel. The grandest moments in sports-entertainment history were made all the grander thanks to Howard’s iconic voice. pic.twitter.com/aAMY2XaHsm