“The Voice of Memphis Wrestling” – Lance Russell, dies at age 91.

Lance Russell was a legendary announcer whose smooth, easy-going style made calling matches look easy, but as anyone who’s heard bad commentating can attest, it’s far more difficult to call matches than it seems.

Russell spent the majority of his career in Memphis Wrestling, yet earned a worldwide reputation as one of the greatest wrestling announcers of all time. That Lance Russell’s name is spoken in the same breath as Jim Ross and Gordon Solie is a testament to his work, and like these two announcers, he was equally gifted as a stick man, capable of getting a good interview out of even the most marble-mouthed of wrestlers.

Lance Russell was born on March 18, 1926 and grew up in the small town of Jackson, Tennessee. 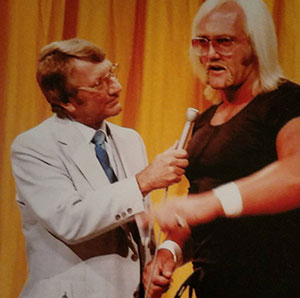 Lance Russell interviews a newcomer by the name of Hulk Hogan. Memphis Wrestling, 1979.

Although Russell’s legend grew out of his work in Memphis, he started calling matches in his hometown of Jackson when promoters Nick Gulas and Roy Welch started a new wrestling program. Russell found he enjoyed the gig, and that was the beginning of a storied career calling matches.

In addition to calling matches, Lance Russell worked as a programming director, analyzing demographics to better understand his audience. This led to a revolution in wrestling programming. At the time, Memphis wrestling aired on Saturday afternoons, but was often preempted by shows such as Wide World of Sports. Russell decided to air wrestling at 11am, against Gulas’ wishes. Russell’s move paid off with Saturday morning wrestling becoming a fixture in Memphis, achieving unheard of ratings and leading to other promotions following his programming lead.

Lance Russell discovered radio disc jockey Dave Brown in 1967, inviting him to work as his co-announcer for wrestling. In a 2015 interview with the Post and Courier, Russell discussed how he recruited Brown:

“I needed a guy to work with me because the guy that I had was dropping out of it. I was looking for an assistant. I got to know Dave around the station and was really impressed. When he said he would do something, he did it. Dave was just a very conscientious guy who was an extremely dependable man of his word. That attracted me to him. He had a great personality and a great sense of humor.”

The two formed a remarkable announce team as well as a life-long friendship. Russell also helped Brown become the local weatherman, a career he continued for decades. However, Dave Brown wasn’t Russell’s only tag team partner. Russell helped a young artist by the name of Jerry Lawler share his cartoons of wrestlers on air. This led to Lawler eventually stepping into the ring and becoming a wrestler. Eventually Lawler became “The King of Wrestling” as the area’s top star and an eventual color commentator for the WWE. During his time as a heel, Lawler taunted Russell by calling him “banana nose,” but behind the scenes the two men became lifelong friends.

In a promotion surrounded by some of the most off-the-wall performers and the home of some of wrestling’s most insane matches (the scaffold match is believed to have debuted in Memphis Wrestling), Lance Russell did his best to sell angles, show his disdain for heels’ reprehensible deeds, and wrest good promos from wrestlers with limited mic skills.

Russell reminded fans of a laid-back uncle who put up with his nephews’ shenanigans – but only for so long. However, there were times when even Russell was legitimately taken aback by what he saw. One interview saw wrestler Jos LeDuc take an ax and cut into his flesh as he said he was taking a blood oath to destroy his opponent. Russell, who also served as an executive for the TV station’s owner was shocked and justifiably concerned about what had just taken place:

A Regional Star with National Fame

Memphis Wrestling might seem like a small promotion, but co-owners Jerry Jarrett and Jerry Lawler drew a monster business. In a 2016 interview with Slam!, Lance Russell put things into perspective regarding how big wrestling was in Memphis:

“…we used to sell out 11,000 every single week in the Memphis Mid-South Coliseum and I’d ride all the guys in the East who would talk about Madison Square Garden. Look at that man, they’d say, we had 24,000 people there. And then I’d say, yeah but that was in a city with eight million, and we’re sitting down in here in Memphis with 350,000 people and we had 44,000 people in one month spread over four shows.”

Although Lance Russell spent the majority of his career calling matches in Memphis, his remarkable announce style led to national fame during the 1980’s. The proliferation of  VCR’s in the 1980’s expanded the practice of tape trading, allowing wrestling fans to see action from all over the country. Lance Russell’s popularity grew as a new fanbase embraced his distinctive style. Russell called some of the promotion’s biggest matches including the Tupelo Concession Brawl and the “Empty Arena Match” involving Terry Funk and Jerry Lawler.

As always, Russell played the role of the long-suffering peacemaker, trying to maintain order in an already chaotic environment which turned into an abyss thanks to Kaufman’s presence.

Russell gained further exposure from the Lawler/Kaufman feud thanks to I’m From Hollywood, a documentary chronicling Kaufman’s foray into Memphis.

Eventually, World Championship Wrestling (WCW) took notice of his many talents, bringing Russell into the promotion in 1989 to serve as an announcer. In addition, Lance Russell produced WCW’s 1-900 hotline during the 900-number heyday. He eventually returned to Memphis where he continued calling the action.

Lance Russell was well-respected in his community, both by his co-workers, his family, and the members of his church. His achievements earned him various industry awards including inductions into the Pro Wrestling Observer Newsletter Hall of Fame and NWA Hall of Fame. Additionally, he taught Sunday school for years, with at least one of his students going on to become a broadcaster. Lance Russell retired to Pensacola, Florida where he lived with his wife Audrey, who passed away in 2014. Tragedy brought him back to Memphis when his sick daughter Valerie succumbed to cancer just days before Lance’s death. Lance’s son asked for prayers for his dad, who he said had been suffering from health issues. Russell fell and broke his hip while in Memphis.

Lance Russell passed away on October 3, 2017 from complications related to his hip fracture.

Lance’s obituary detailed his surviving family members and predeceased ones “He was preceded in death by his much-loved wife of 67 years, Audrey and his daughter, Valerie Houston. Mr. Russell is survived by his two sons, William Lance Russell and his wife Debbie, Shane Russell and his wife Debra, eight grandchildren, eight great grandchildren, and his faithful dog and best friend Buddy.”

Lance Russell was 91 years old at the time of his passing.

Do you think Lance Russell was the best wrestling commentator of all time? Sound off in the comments section below.