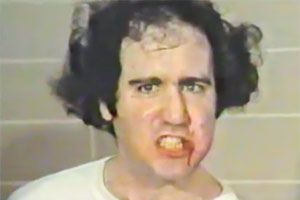 Andy Kaufman cuts a scathing promo after getting knocked around by Jerry Lawler. He offers $5,000 to any wrestler who can put Lawler in the hospital. Memphis, 1982.

Although Andy Kaufman was often billed as a comedian, his place in history isn’t so simple. Part actor, part performance artist, and yes, part comedian – Andy was a multifaceted entertainer. Today, we dive into Kaufman’s run as a professional wrestler. That’s right, the self-proclaimed “Intergender Champion”. Kaufman truly left behind a legacy just as strange as he would have hoped for…

Andy Kaufman was born on January 17, 1949 in Queens, New York. Growing up in upper-middle class Great Neck Long Island, young Andy entertained his friends and family from the time he was an infant, dancing in his crib to music and eventually entertaining people at birthday parties. 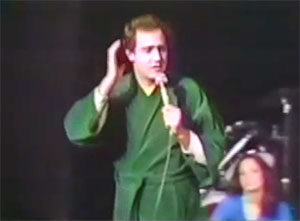 A tumultuous childhood saw Andy experiment with drugs and father an out-of-wedlock child (who was turned up for adoption but later connected with Kaufman’s family in 1992). However, he found peace through transcendental meditation and joined a comedy improv.

Kaufman’s off-the-wall antics amused audiences – with both fans and club-owners questioning his sanity along the way. By 1972, Andy Kaufman was appearing on national television, including his national debut on The Dean Martin Comedy World. He would go onto a then-record 14 appearances on Saturday Night Live. Kaufman co-starred in popular sitcom Taxi, which cemented him as a household name in the late 70s – though Andy was vocal about how much he hated sitcoms.

There was no stunt too grand or too outrageous for Kaufman to try, and the bigger his star rose, the more he could get away with. In an infamous 1979 performance at Carnegie Hall, Kaufman staged one of the elder actors having a heart attack. He later invited the entire audience out for milk and cookies following the show. A fleet of two dozen buses parked outside Carnegie Hall, waiting for anyone who took Kaufman up on his offer. A natural in front of the camera, Andy Kaufman played the role of a heel wrestler to a T. photo: youtube

With its outrageous characters and subtle manipulation of its audience, Andy Kaufman had always been intrigued by professional wrestling. It was an ideal venue for Kaufman to work his unconventional style of entertainment – and with a penchant for the grandiose, Kaufman’s run in Memphis became the stuff of legend. But getting there led to at least one closed door.

With high hopes of breaking into the wrestling biz’, Kaufman told Bill Apter, editor of the Weston family of magazines such as Pro Wrestling Illustrated and The Wrestler (known to fans as “The Apter magazines”), about his idea of entering the squared circle as a villain.

Apter informed Vince McMahon Sr. about Kaufman’s proposal, but McMahon turned the idea down – worried that the audience wouldn’t buy a Hollywood star in the ring, and in turn potentially exposing the business.

But Kaufman was determined to become a wrestler.

Apter put him in touch with Memphis wrestler Jerry “The King” Lawler, who co-promoted Championship Wrestling Association (CWA) with Jerry Jarrett. Lawler bought the idea, and one of the most memorable feuds in wrestling history was born.

Kaufman began a legendary program when he appeared in the Memphis-based CWA, antagonizing fans by insulting them:

and challenging their women to wrestle him:

To no one’s surprise, the citizens in Memphis wanted to see someone destroy the outsider from Hollywood.

Kaufman offered $1,000 to any female who could pin him in three minutes and a Memphis resident named Foxy accepted the challenge. Foxy gave Kaufman the proverbial run for his money, but the Hollywood invader proved successful. Andy Kaufman gives the folks of Memphis a lesson in hygiene

In true wrestling tradition, the promoters took things to the next level when local hero Jerry “The King” Lawler offered to train Foxy for a rematch with Kaufman. Kaufman in turn, promised to marry Foxy if he lost, setting the stage for a highly anticipated rematch in Memphis’ Mid-South Coliseum (aka the Memphis Coliseum).

That night, Kaufman triumphed again, despite Lawler’s training and his presence in Foxy’s corner.

After the match, Kaufman humiliated Foxy by rubbing her face into the mat. An angry Lawler rescued Foxy, pulling Kaufman off her and shoving the TV star to the ground. Kaufman threatened to sue and reminded Lawler he only wrestled women.

Eventually, Jerry Lawler challenged Kaufman to a match, and on April 5, 1982, the two met in the Memphis Coliseum. During the match, Kaufman did everything possible to avoid Lawler, leading to Memphis’ number one hero to famously ask him, “Did you come down here to wrestle or act like an ass?” 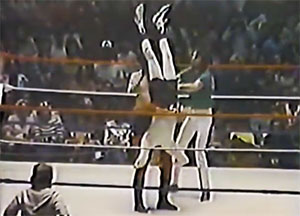 Jerry Lawler puts Andy Kaufman in the hospital after delivering a pair of piledrivers.

A crafty Lawler offered Kaufman the chance to put him in a side headlock and Kaufman fell into Lawler’s trap. Lawler quickly suplexed the hapless actor, driving him into the mat.

The 10,000 fans in attendance were electric as Lawler picked up Kaufman and piledrived him, laying him out and earning a disqualification from referee Jerry Calhoun (the piledriver was banned in Memphis).

With nothing to lose, Lawler piledrived Kaufman a second time.

In his memoir, It’s Good to be the King…Sometimes, Jerry Lawler recalls how Kaufman and Lawler negotiated the end of the segment through referee Jerry Calhoun. Kaufman quietly asked that an impromptu ambulance be brought in to stretcher him out, thus making the angle appear more dramatic to the fans. Lawler refused, telling referee Jerry Calhoun that it would cost the company $500 to pay for it. But Kaufman wasn’t taking no for an answer, offering to pay the $500 out of his own pocket to sell the storyline. An ambulance arrived, Kaufman was stretchered out of the arena, and he continued the act all the way to the emergency room – convincing the hospital staff he’d suffered compressed vertebrae. Never one to break character, Andy stayed in the hospital for three days.

July 16, 1983, Memphis TV: Kaufman says he wants revenge on manager Jimmy Hart, attempting to recruit Jerry Lawler as his tag partner – but is it just a setup?

The crowd was buying the storyline, hook, line and sinker. And so was the rest of the world.

The incident in Memphis made the national news, just as Kaufman had undoubtedly hoped. Jerry Lawler couldn’t have been happier. Not only was he getting national attention, but so was his Memphis territory. Lawler’s peers congratulated him on teaching a lesson in respect to an outsider. Houston promoter Paul Boesch even telegrammed Lawler to thank him for protecting the business. The line between reality and storyline had never been quite so blurry, even for some insiders who were “smart to the business”. 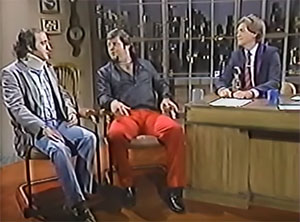 Andy Kauffman and Jerry Lawler appear on David Letterman in 1982, when things quickly take a turn for the worse.

The angle was just beginning however. During the summer of 1982, Kaufman and Lawler appeared on NBC’s Late Night with David Letterman talk show.

Letterman interviewed them about their feud, with Kaufman (wearing a neck brace to sell his injury) and Lawler exchanging insults.

Finally, Lawler appeared to have enough. “The King of Wrestling” rose from his chair and slapped Kaufman, knocking the TV star out of his seat. Things only got worse as Kaufman grabbed a cup of coffee from Letterman’s desk and threw its contents at Lawler.

The storyline was hotter than ever, and led to many more matches and angles involving Lawler and Kaufman. The two feuded for years, but as the saying goes, all good things must come to an end. Eventually the drama fizzled out, the storyline having run its course.

While the angle in Memphis was over, Kaufman continued with his love of wrestling.

1984 saw the release of Kaufman’s My Breakfast with Blassie, a sixty-minute film featuring Andy having breakfast with wrestling icon “Classy” Freddie Blassie. The film spoofed the 1981 comedy-drama My Breakfast with Andre, and featured the madcap humor of both Kaufman and Blassie interacting with each other, as well as other people in the restaurant.

Andy Kauffman’s Death… or Death Hoax depending who you ask

Sadly, by the time My Breakfast with Blassie was released, Kaufman was in bad health.

Family and friends were concerned by his unhealthy appearance and persistent cough. Andy finally went to a doctor and in January 1984, he was diagnosed with lung cancer.

Kaufman tried a number of alternative cures including natural medicine and psychic surgery. However, the illness took its toll and on May 16, 1984, Kaufman passed away at Los Angeles’ Cedars-Sinai Medical Center. He was 35 at the time of his death.

Andy Kaufman is buried in his family’s plot at the Beth David Cemetery in Elmont, New York. Andy’s grave sits adjacent to his mother’s, Janice Kaufman, who passed in 1989. Andy Kaufman’s grave at the Beth David Cemetary in Elmont, NY. His grave marker reads “We love you very much.” Andy Kaufman’s grave, next to his mother’s, at the Beth David Cemetary in Elmont, NY

Bob Pagani, a friend of Andy’s, told the Daily Mail “I know people at the wake in Long Island literally leaned over the casket and said, “Andy, if you’re faking, please stop.”‘

In 2004, some of Kaufman’s friends even held a “Welcome Back” party, hoping he’d show up.

In 2013, a woman appeared claiming to be Kaufman’s daughter, proclaiming he was still alive. However, TMZ reported this was a hoax and that Kaufman’s so-called daughter was actress Alexandra Tartarsky.

Although Andy Kaufman enjoyed success during his lifetime, his talents were not fully appreciated until after his death. Kaufman’s work as a performance artist was years ahead of anyone else. Jim Carrey portrays Andy Kaufman in the 1999 film, “Man on the Moon”

Andy Kaufman’s work anticipated the reality show craze of the late 90’s, and many artists found inspiration in his work. R.E.M. wrote their hit single “Man on the Moon” about Andy Kaufman, and a film of the same name starring Jim Carrey was released in 1999. A documentary titled Jim and Andy was released on Netflix in 2017 – featuring a behind the scenes look at Jim Carrey transforming himself into Andy Kaufman for his starring role in Man on the Moon.

Kaufman’s mixture of Hollywood and wrestling would be taken further when Vince McMahon launched his WWF into a national promotion in the mid 80s; using celebrities such as Cyndi Lauper and Mr. T to boost his audience. This is a strategy still commonly used by the WWE today.

Have any fun memories of Andy Kaufman? Share them in our comments section below.