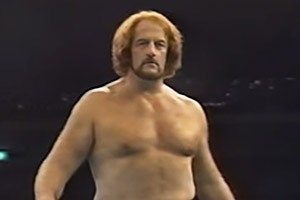 French-Canadian wrestler Rene Goulet worked in the territories, but arguably gained just as much TV exposure for his post-wrestling career as a WWF agent.

Goulet would often appear during brawls and other memorable angles along other wrestlers-turned-agents such as Tony Garea and Blackjack Lanza.

Like many of his contemporaries, Goulet worked the various wrestling territories of North America, but also made extensive tours of Australia, Europe, and Japan.

“The Number One Frenchman”

Robert Bedard was born on July 12, 1932 in historic Quebec City and enjoyed sports, playing hockey as a defenseman (and nearly dying after an opponent’s skate cut into his throat).

In addition to hockey, Bedard trained as a bodybuilder and a boxer, but decided to try wrestling after another boxer warned him he’d be punch-drunk by the time he was 25. Bedard worked his first match in 1957, but it would be several years before he adopted his well-known wrestling identity as Rene Goulet.

Bedard became Rene Goulet when he began working in Verne Gagne and Wally Karbo’s Minneapolis territory. Gagne and Karbo changed Bedard’s name to capitalize on the wrestler’s good looks and the popularity of singer Robert Goulet. Wrestling Around the Territories

In a 2000 interview, Goulet discussed the on-the-job training that improved his wrestling skills:

“Sometimes, you didn’t even know this guy standing in front of you. Some guys you’d go in against were horrible, and it wasn’t just a matter of having a good match, it was a matter of protecting yourself. It was all ad-lib…there was no script. In my time, you went in the ring and you worked. You went from move to move, without having any idea what was coming next.”

As Goulet’s experience grew, so did his opportunities in the ring.

Goulet worked in Jim Crockett Promotions as Sgt. Jacques Goulet, and over time began using the clawhold as his finisher.

Goulet eventually settled in Charlotte, North Carolina, a city he and his wife grew to love. Rene Goulet teams up with Andre the Giant to take on Hulk Hogan and Antonio Inoki – Yokohama, Japan, 1982.

Wrestling Around the World

With his well-rounded skillset and ability to work with a variety of opponents, Goulet found himself brought into a variety of territories in North America as well as promotions from around the world. Goulet worked in Europe, Australia, and Japan, working in singles action and tag team competition. In Japan, he teamed with life-long friend Andre the Giant to win the New Japan World Tag League in 1981.

From Wrestler to Road Agent

As his career began to slow down, Goulet began shifting from an in-ring role to a role backstage.

From an interview with Slam, Goulet says “At first I became a (road) agent while I was still wrestling. I used to wrestle the first match, then I would tell the guys what to do and take care of the dressing room. Sometimes I used to go to the box office with my wrestling boots on.”

By 1984, Goulet had finished wrestling, but maintained a presence on WWF TV, including his Tuesday Night Titans segment, “Café Rene.” From there, fans might see him running out with other agents to break up skirmishes and scuffles.

Goulet was involved in one of wrestling’s biggest angles when he, Tony Garea, Blackjack Lanza, and other road agents fought furiously to save the Ultimate Warrior when the Undertaker locked him in a coffin.

From the Squared Circle to the Golf Course

The WWF unceremoniously released Goulet in 1997, but he moved on, enjoying retirement with his wife. The couple played golf, including charity tournaments, and other social activities.

Rene and his wife were together nearly 70 years, a rarity for a relationship involving a professional wrestler. Rene worked hard to be home as often as possible and credits his marriage’s longevity and happiness to a number of things including: “First of all, of course, there has to be love. Then there’s respect between each other. It won’t work without respect. At our house nobody’s the boss. Whatever she says is OK, whatever I say is OK. We always talk with each other before we make a decision. Thank God she was very good with that, because it’s hard to last that long in the wrestling business. It’s almost a miracle. But you have to work at it.”

Rene Goulet passed away on May 25, 2019, but his family wished to maintain their privacy and did not announce his death until December 2019. Rene Goulet was 86 years old at the time of his passing.

Goulet is survived by his wife Pierrette, daughter Johanne, his sister Suzanne, and his extended family.

What are your favorite memories of Rene Goulet? Be sure to leave them in our comments section below.