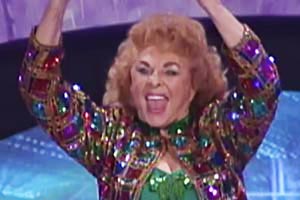 Moolah also stands out as one of the wrestlers to lead a long life.  The Fabulous Moolah death story didn’t reach its final chapter until 2007 when she was 84 years old.

Moolah takes on a young Sherri Martel in 1982. Both women are no longer with us

Stepping Back into the Ring

If fate had taken a different twist, the Fabulous Moolah death story might have taken place in 1999. In 1999, Fabulous Moolah decided to try her hand at professional wrestling again and stepped back into the ring. She began to experience dizziness when she was training. She was instructed to use a heart monitor to see what the problem was. It turned out that she was suffering from clogged arteries and had a severe case of viral pneumonia.

Moolah spent the next 24 days in intensive care. She would be released from the hospital only to fall in the bathroom and injure her back. In late December 1999, she underwent back surgery. While she ended up surviving the ordeal, The Fabulous Moolah would never be able to wrestle again. No Mercy 1999: At the ripe age of 76, Moolah rolls up Ivory and wins the WWF Women’s Championship. Moolah would be dead within 8 years. photo: wwe.com

The Facts About the Fabulous Moolah Death

In 2007, Fabulous Moolah once again found herself in need of medical care. The 84-year-old former wrestler was told that she needed to have shoulder replacement surgery. She underwent the treatment sometime during the second half of 2007.

On November 2, 2007, Moolah passed away in Lexington, South Carolina. It’s not known whether she was in the hospital at the time, but reportedly, she was not in her home in Columbia, South Carolina. Because of Fabulous Moolah’s age, her daughter, Mary, opted not to have an autopsy performed. In an interview at the time of her mother’s death, her daughter stated that her mother died either from a blood clot due to the surgery or due to a heart attack.

Tributes Roll in After the Fabulous Moolah Death News

Following the death of Fabulous Moolah, many sports reporters penned tributes to her. Notably many professional wrestlers spoke about how inspiring and tough she was. The Fabulous Moolah being interviewed by Mean Gene Okerlund at WrestleMania I, 1985. photo: wwe.com

A tribute was posted on WWE.com, noting that Fabulous Moolah paved the way for women to wrestle and that she started a legacy that would never be forgotten. The statement rings true as Fabulous Moolah will forever be remembered for her long reign as a champion. She was also the first woman to ever be inducted into the WWE Hall of Fame when she was given the honor in 1995.

In 2003, Moolah was added to the ranks of the Professional Wrestling Hall of Fame and Museum in Texas.

Even though she has passed, many young wrestling fans continue to discover the Fabulous Moolah today, as her career is discussed at length in the well known documentary Lipstick and Dynamite.

The Fabulous Moolah’s grave is located at the Greenlawn Memorial Park in Columbia, SC. Have a comment about Moolah? Sound off in the comments section below!