Brian Adams aka Crush dies from a drug overdose at the age of 43. photo: wwe.com

It’s not uncommon for wrestlers to reinvent themselves during the course of their careers, and Hawaiian born Brian Adams was no exception. With the WWF he was part of Demolition, the Disciples of Apocalypse stable, and possibly most remembered for his “Kona Crush” gimmick – the laid back surfer dude who feuded with Doink the Clown in the early 90s. Adams also spent time with WCW.

Although he never saw huge success, Crush was a tag team championship winner with both World Championship Wrestling and the World Wrestling Federation. He had plans of retiring and leading a quiet life, but sadly he passed away at the young age of 43. Crush’s Attitude-era gimmick as a member of the biker stable, The Disciples of Apocalypse. photo: wwe.com

A Shocking Prelude to the Crush Death Story

The news of Brian “Crush” Adam’s death would end up becoming a major news story in the world of sports but not because of Brian Adams’ level of fame. Less than 2 months before Crush passed away, wrestler Chris Benoit shocked the world by murdering his wife and his son and then killing himself in a rage first believed to be fueled by the use of anabolic steroids.

In the wake of Chris Benoit’s death, the world of professional wrestling was being heavily scrutinized, setting the stage for further intrigue when Crush died shortly thereafter.

The Events of the Crush Death Story

Crush was forced to retire in 2003 after an injury. He collected on a Lloyds of London insurance policy and was working to open a gym to train professional wrestlers. In the years since Crush passed away, information has been shared about just what happened on the day of the wrestler’s death. Apparently, his wife awoke on August 13, 2007, to find Adams completely unconscious in bed. Frantic, she called for help, but paramedics were unable to revive him. Brian Adams was declared dead at his home in Tampa, Florida, at the age of 43.

Kona Crush: In his return to the WWF in 1992, Crush’ gimmick is a surfer-dude baby face. One of his most notable feuds was with the original Doink The Clown

Because Brian “Crush” Adams had seemingly been in good health, rumors started flying after he passed away. The news media had widely covered the case of Chris Benoit’s death and right away began making speculations about how Crush died. Many reporters either insinuated or outright stated that his death was potentially linked to anabolic steroid use.

People began criticizing the world of professional wrestling. Many concluded that the WWE promoted drug use and did little or nothing to keep wrestlers from abusing drugs to bulk up.

The Cause of the Crush Death Story Revealed

Ultimately, the rumors about Crush’s death being tied to drug use were false. An autopsy performed by the coroner of Hillsborough County found that there were no signs that Crush had abused anabolic steroids on the day of his death or prior to his death. This is an interesting note, considering that in 1995 Adams served jail time for purchasing steroids. In the same arrest he was also charged with carrying an illegal firearm. 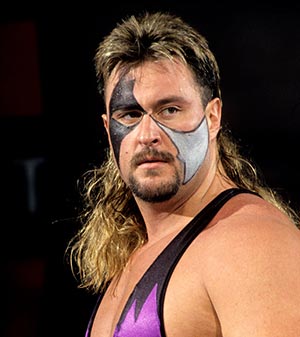 Crush’s heel gimmick in the mid 90s. It was around this time that he feuded with the late Randy Savage. photo: wwe.com

The autopsy did find that Brian had the pain reliever buprenorphine in his system as well as the muscle relaxant carisoprodol and the sedatives alprazolam and chlordiazepoxide.

In his report, the coroner stated that the doses of each drug were therapeutic and within dosing guidelines; however, the medications should not have been taken all at one time. Apparently, the cocktail of drugs suppressed Adam’s respiratory system.

Have a comment about Crush? Sound off in the comments section below!