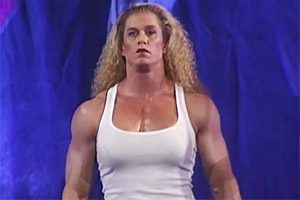 Nicole Bass – Dead at 52. She suffered a stroke earlier in the week. photo: wwe.com

Earlier this week, Meltzer reported that she had suffered from a stroke. Apparently she was unable to recover.

Bass was a professional bodybuilder before transitioning to wrestling.

First getting her feet wet in ECW, Nicole would eventually make her way to the WWE by 1999.

Even with limited wrestling ability, Bass came along at the right time and right place in the WWE’s booming Attitude era.

Debra was expecting to take on Sable in an Evening Gown match on the 3/5/99 episode of Raw… instead, she got Nicole Bass Armed with a unique look, the WWE was hoping to strike gold twice, essentially booking Bass as a carbon copy of Chyna – a dominant female who could hang with the boys.

Chyna was of course a rousing success for the WWE. Unfortunately Nicole’s wrestling career would never reach those heights.

Although her WWE tenure was brief, Bass received considerable TV time during her run. She made her debut at WrestleMania XV where she worked as the kayfabe bodyguard to Sable (just like Chyna when she first entered the company as Triple H’s muscle). Nicole Bass and Val Venis defeat Jeff Jarrett and Debra at the Over the Edge PPV in 1999. This was the same PPV where Owen Hart fell to his death. photo: wwe.com

Bass would eventually work a program with Val Venis, where the duo feuded with Jeff Jarrett and Debra McMichael. The feud climaxed with a mixed tag team match which took place at Over the Edge ’99 – the same PPV in which Owen Hart was killed after a fall from the arena rafters.

Nicole Bass’ departure from WWE was sudden. It was ultimately reveled that Bass was suing WWE staff member Steve Lombardi for sexual harassment. Lombardi is best known to fans as jobber, The Brooklyn Brawler.

In 2003 the sexual harassment case was dismissed. 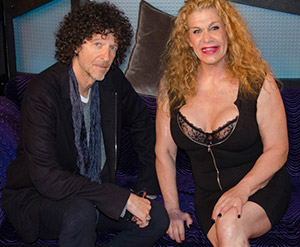 Nicole Bass was a regular on the Stern show. Here she poses with Howard after her May 3, 2016 appearance. photo: howardstern.com

Nicole Bass has appeared in several independent films. Her most recognized role came in 1997, her film debut, where she played herself in a brief role in Howard Stern’s Private Parts.

Bass would go on to become a regular in Stern’s Wack Pack – a unique group of personalities who make regular appearances on Stern’s radio show for entertainment and comedic purposes.

In June of 2015, Bass made headlines when she was arrested for shoplifting from a Stop & Shop grocery store in Queens. She had over a thousand dollars worth of groceries and beauty products in a cart, which she wheeled out the front door without paying.

Prior to this, Bass had documented struggles with substance abuse including steroids.

Sadly, her health issues would get the best of her.

Several wrestlers have taken to Twitter to show their respects. We’ve highlighted a few Tweets below. R.I.P. Nicole!

Sad to confirm ECW & @sternshow Nicole Bass has passed away.
Her heart was as big as she was.
A wonderful & loyal friend pic.twitter.com/zNyvnluFFB