Perhaps wrestling’s greatest masked villain, “The Intelligent, Sensational” Destroyer worked in various promotions in North America, but achieved his greatest fame in Japan where he was not only a wrestling star, but an all-around celebrity.

When he wasn’t wearing the mask, Dick Beyer was well-known and admired in Western New York for his work coaching youth sports as well as his various charitable works.

From Buffalo, NY to Around the Globe

Born in Buffalo, NY on July 11, 1930, Dick Beyer was a talented athlete and competed in college football for Syracuse University where he played as an offensive lineman and played in Syracuse’s first trip to the Orange Bowl. While the team lost to Alabama, Beyer was a stand-out and served as co-captain in 1952. College football wasn’t the only sport he excelled at as he wrestled an undefeated season during his senior year at Syracuse.

Beyer graduated from Syracuse with a master’s degree in education, and trained under wrestlers such as Dick Hutton and Ray Stevens, initially working as a babyface. According to a story in The Post and Courier:

As good guy Dick Beyer, he experienced moderate success as a journeyman grappler. Voted 1955 Rookie of the Year by ‘Wrestling Life’ magazine, Beyer worked the first seven years of his mat career near his Western New York home, due in large part to his coaching job and commitment to the U.S. Army Reserve. Over time, Beyer furthered his skills, learning the figure four leglock while touring in Hawaii and developing his skills as a heel, boasting of his East Coast education and proclaiming himself “The Intelligent, Sensational” Dick Beyer. However, big things awaited him in the squared circle, but it would require an amazing transformation into one of the greatest masked heels of all time.

Beyer traveled to California after wrestler Freddie Blassie praised Beyer’s heel skills to local promoter Jules Strongbow. Strongbow informed him he would wrestle as the masked Destroyer. Unfortunately for Beyer, the mask was an extremely uncomfortable woolen contraption that made him claustrophobic and itchy. Beyer was determined to rid himself of the gimmick, but wrestler Ox Baker lent him a mask made from a woman’s girdle and it served him well. The mask changed everything.

Beyer later recalled to The Buffalo News, “I was asked to wear a mask in 1962 and I said, ‘You have to be out of your mind. In four weeks, it doubled my income.” 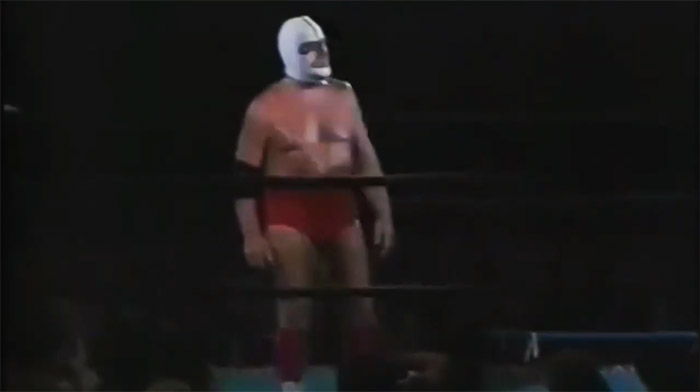 Beyer embraced the dark side, donning a mask and making the Destroyer one of wrestling’s greatest heels.

Billing himself as “The Intelligent, Sensational Destroyer” he also worked under a hood as Dr. X in the American Wrestling Association, even winning the promotion’s top prize, the AWA World Heavyweight Championship.

The Destroyer entered wrestling legend when he battled Japan’s iconic grappler Rikidozan in a 1963 TV match that boasted 70 million viewers. It was Japan’s highest-rated show at the time.

Incredibly, the Destroyer also was a regular on a Japanese TV show Uwasa No Channel. The musical-comedy show only furthered the Destroyer’s popularity in Japan. He fell in love with the country, living there for several years, even recording a Christmas album for his Japanese fans.

According to his obituary in The Buffalo News, Beyer was also the first American wrestler signed to a Japanese promotion.

According to an obituary in The Japan Times, “although Japan had been a World War II enemy when he was in high school, he became a big fan of the country after traveling there.” Indeed, Dick Beyer had told his loved ones he hoped to travel to Japan in 2020 for the Tokyo Olympics.

How famous was the Destroyer in Japan? Consider this incredible achievement: In 2017 Beyer was awarded the Order of the Rising Sun, the highest order that can be conferred upon civilians other than royalty or politicians by the Japanese government, for “a lifetime spent promoting goodwill and bi-cultural exchanges between Japan and the United States”; news of his death filled the front pages of Japanese newspapers. (signor) 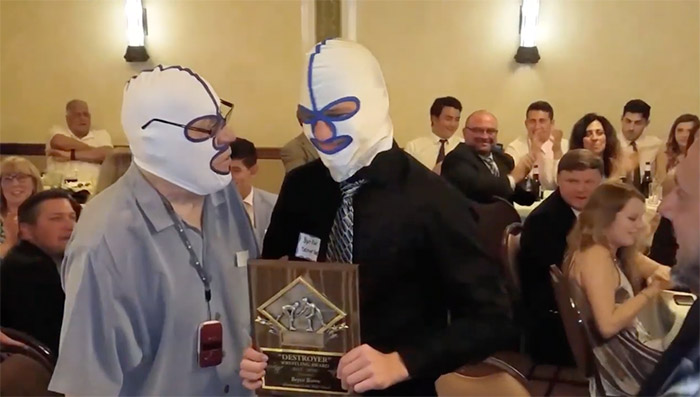 Giving Back to the Community

Although Beyer enjoyed incredible fame as a wrestler, he was also well-known in Western New York for coaching young people and his philanthropy.

His contributions to the Akron school system brought many accolades, including the following mentioned in one of the many news stories celebrating his life:

“Everybody automatically associates him with wrestling,” said Ken Stoldt, who served as the athletics director at Akron in the 1990s, “but when I was the AD there he was my swim coach. And I think that was Dick’s biggest accomplishment at Akron, was what he did with the swim program. He was very well-liked, and the guy genuinely cared about his kids. That’s one thing that immediately comes to mind with me, is that through our conversations through the years, he always had the kids’ best interest at heart.”

Long after retiring from the squared circle, Beyer stayed close to Japan, often bringing American wrestlers there to help them expand their knowledge of wrestling and Japanese culture. Beyer’s mask became an important part of his identity and he never traveled to Japan without it, even going through customs with it. In March of 2019, Beyer reflected on his fame in Japan with Syracuse.com:

“Over there, I’m like Ted Williams used to be in the United States. Or Mickey Mantle. Or any celebrity that you would instantly recognize out on the street in our country. But they wouldn’t know me from 10 bags of apples without my mask. With it on, though, probably 80 percent of the population knows who I am. At least the population that’s over 25.”

The Destroyer was well-respected by his peers, with “Classy” Freddie Blassie describing him as one of the top 10 wrestlers of all time. 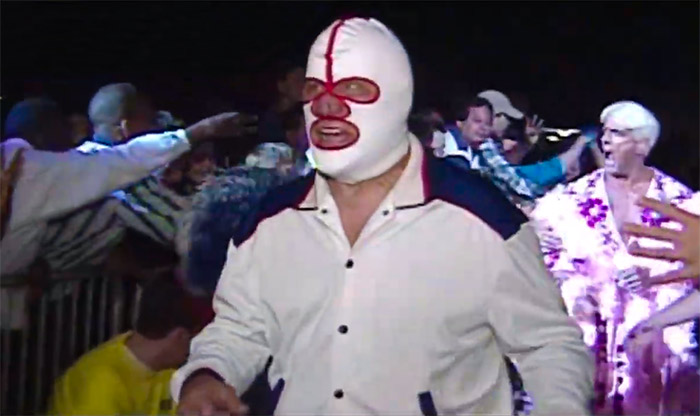 The Destroyer enters the ring with Ric Flair for the first annual Ilio DiPaolo Memorial Show at the Buffalo Memorial Auditorium – over 16,000 fans attended the event. photo: youtube

According to Slam, “Beyer had faced numerous health issues over the last few years and his public appearances got fewer and fewer. He had been in hospice care for a few weeks.”

Beyer was survived by his second wife Wilma (coincidentally, Beyer’s late wife’s name was also Wilma) and his four children.

What are your favorite memories of “The Intelligent, Sensational” Destroyer? Be sure to leave them in our comments section below.