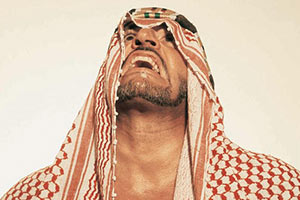 Edward Farhat, best known as The Sheik (or the “Original Sheik” to differentiate from the Iron Sheik) has died at age 76 from heart failure. photo: myspace

When wrestling’s roll call of villains is made, it’s unlikely they’ll be anyone as fierce or as brutal as Ed Farhat, better known as the Sheik. The Sheik made opponents bleed night after night and singed many an opponent with his dreaded use of fire. While the Sheik operated out of the Detroit territory he owned, he worked a number of promotions. Unfortunately, his wild matches sometimes led to fast runs before he was shown the door. Nevertheless, Farhat is considered one of wrestling’s greatest heels. Later in his career: The Sheik with his nephew, Sabu

Edward Farhat wrestled during television’s Golden Age of Wrestling in the 1950’s. Fans familiar with the bloody and brutal Sheik of the 60’s and 70’s might be surprised by the Sheik’s early persona. As the Sheik of Araby, he portrayed more of the stereotypically wealthy Arab and wrestled, as well as sold for opponents. While he was still a rule breaker, he spoke in a mysterious foreign tongue and enraged fans with his actions in the ring as well as his mistreatment of his slave girl.

However, it was as the Sheik that Farhat became one of wrestling’s icons. The Sheik was nothing less than a wild man, pummeling opponents senseless with everything but wrestling holds. He choked, he bit, he raked the eyes.

Inevitably, the Sheik produced a foreign object to bust open his opponent, leaving them a bloody mess. With the opponent ready for a trip to the emergency room, the Sheik locked them in his Camel Clutch, torturing them more and enraging the fans even further. 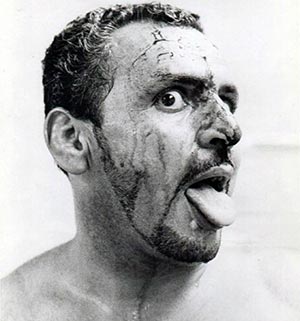 The Other Mecca of Wrestling

In 1964, Farhat purchased the National Wrestling Alliance’s Detroit territory from Jim Barnett. The promotion became known as “Big Time Wrestling,” with Farhat working the territory as the promotion’s main event heel for the next 16 years. The Sheik battled a who’s who of babyfaces as fans waited anxiously to see who might defeat the Sheik. The promotion’s Cabo Hall was its Mecca of wrestling, with the Sheik defending his United States Championship against various opponents. The Sheik battled many of wrestling’s most popular babyfaces, but his feud with Bobo Brazil was arguably the biggest. The feud ran decades and saw the two bleed enough plasma to keep the Red Cross going for months.

The Sheik and the Streak

The Sheik’s fame and drawing power was not limited to his Detroit promotion. The Sheik enters the ring at the Maple Leaf Gradens in Toronto. photo: @maple_leaf_wrestling_archives / instagram

Farhat enjoyed a wildly successful run in Frank Tunney’s Maple Leaf Wrestling territory, main eventing 150 shows from 1967 to 1974, including an undefeated streak that ran over 100 matches. Each show drew 10,000 or more fans, something other shows typically failed to do if the Sheik wasn’t main eventing. The Sheik’s drawing power stemmed from the fans’ desire to see someone finally dish out the punishment he deserved.

However, the fans eventually tired of the Sheik’s dominance, particularly after Andre the Giant was brought in to end the Sheik’s reign of terror. To the fans complete shock, the Sheik defeated Andre thanks to the aid of his mysterious ability to throw fire. The fans soured on the Sheik after that and the house draws reportedly plummeted.

The Sheik: He’s Not for Everyone

Edward Farhat transcended from a wrestling villain into arguably the most reviled figure in the ring during the 60’s and 70’s. He lived the character in and out of the ring, and was known for slicing and dicing any fan stupid enough to confront him. Legend has it the Sheik kept razor blades under his fingernails, allowing him to dispatch any would-be assailant.

Outside the ring, the Sheik was either loved or hated by his peers. He was notorious for short-changing wrestlers and employees on pay-outs, but he could also be a generous benefactor to a friend in need. Former NWA World Heavyweight Champion Harley Race recalls how the Sheik provided him with funds when he was laid up for months following a near-fatal automobile accident. The Sheik was also accused of not selling for opponents, always desiring to put himself over. Team work: The Sheik and his nephew, Sabu, terrorize Terry Funk with an open flame

The Sheik’s violent and brutal style was not for everyone. The Sheik found himself banned from New York after his penchant for mayhem proved too much. Sam Muchnick’s St. Louis Wrestling territory brought the Sheik in for one bout and that proved to be one bout too many as far as the more traditionally-based Muchnick was concerned. The Sheik was never asked back to St. Louis.

Although there are different opinions about Ed Farhat, few will dispute the Sheik’s drawing power and well-deserved reputation as one of wrestling’s most successful heels. His matches were typically short, violent, and featured little wrestling. Nonetheless, he knew how to incite an audience and make people buy tickets to see him get his comeuppance.

The Sheik’s Detroit territory eventually closed up, as business dropped with fans tiring of the aging Sheik as the promotion’s main eventer, as well as the Sheik not building new stars. Nevertheless, the Sheik’s legend continued. When Jim Crockett Promotions ran its Great American Bash in Detroit in 1988, the Sheik was invited to team up with Dusty Rhodes against Kevin Sullivan and Dick Murdoch. The show was an incredible success.

In the 1990’s, the Japanese based, ultra-violent Frontier Martial Arts Wrestling promotion, flew in the Sheik (now in his 70’s) to participate in its over-the-top violent matches. The Sheik received an elaborate retirement ceremony in Japan, a country where he had proven a top draw.

The Sheik’s work earned him numerous honors, including induction into the WWE Hall of Fame in 2007, the Pro Wrestling Hall of Fame and Museum, and the Wrestling Observer Newsletter Hall of Fame.

On January 18, 2003, Edward Farhat passed away at age 76 from heart failure. Several publications, including the NY Times note that Farhat was 78 years old at the time of his passing, but his grave stone disputes this: Farhat is buried at the Mount Calvary Catholic Cemetery in Williamston, Michigan.

He was survived by his wife Joyce, sons Edward and Thomas, and four grandchildren.

What are your favorite memories of the Sheik? Leave them in the comments section below.