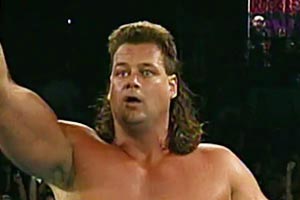 You have to be a confident person to choose “Awesome” to be part of your wrestling name, and in the ring, Mike Awesome, or Michael Alfonso, definitely carried himself with confidence.

During the course of his 17-year career, the heavyweight won the ECW World Heavyweight Championship twice and the WWF Hardcore Championship twice. He also won several titles with Frontier Martial Arts Wrestling and was ranked in the top 10 of the annual ranking of top singles wrestlers published in Pro Wrestling Illustrated in 2000.

Sadly, the events surrounding the Mike Awesome death have largely overshadowed his career in the squared circle.

7 years before his death: Mike Awesome manhandles Kevin Nash in his WCW Nitro debut on April 10, 2000 After a brief stint with TNA in 2003, Mike Awesome began to compete as a singles wrestler on the independent circuit. He wrestled in Japan and with a number of other promotions for brief periods of time. Then in February 2006, he suddenly announced that he was retiring from wrestling. At the time, he cited dissatisfaction with his pay as one of the primary reasons for leaving the wrestling world. A Marriage Dispute Sets off the Mike Awesome Death Story

Much of what is now known about the events surrounding the Mike Awesome death were not revealed until months after he died. Reportedly, Michael Alfonso got into a heated dispute with his wife after she said she wanted a divorce. He was reported to have grabbed her by the throat and to have slammed her into a wall. Fearing for her life, his wife called the police, and Alfonso was arrested and charged with domestic abuse. While he was still in jail, his wife visited him and told him that she was going through with the divorce and taking their two children. After Mike Awesome was released from jail, he returned to his home in Tampa, Florida. At some point soon after, he hung himself, most likely because he was facing criminal charges and had lost his family. It is also possible that he did not find the career in real estate that he launched after his retirement to be satisfying.

Mike’s body was discovered by a group of friends on February 17, 2007. He had turned 42 just a month before his death.

Following the news that Mike Awesome died, both the WWE and ECW paid tribute to him. Before the February 20, 2007 episode of ECW on Sci Fi, a graphic with Mike that said “In memory of” was shown. The WWE placed a tribute article about the wrestler on their website. Information about the fact that the wrestler had been arrested for domestic violence was not revealed until after the shocking news of the murder-suicide death of Chris Benoit, which occurred in June 2007.

Have a comment about Mike Awesome? Sound off in the comments section below!