Few wrestling personalities can boast so long of a career as Frederick Blassman who was known to the world as “Classy” Freddie Blassie. An active wrestler from 1935 to 1986, Freddie Blassie had the distinction of working under the McMahon family through four generations and remaining on the WWE’s roster up until the Freddie Blassie death news was released to the world. 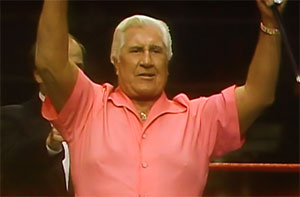 In a time when it was not publicly known that professional wrestling was scripted, Blassie took a lot of heat from fans. In fact, if some fans had their way, Freddie Blassie’s death may have occurred decades earlier. The wrestler’s outspoken words and antics in the ring made him a perfect heel, and in some cases, disgruntled fans reacted violently.

As a manager, Blassie sells half-interests in his talent to new manager, Slick

Over the course of his career, Freddie Blassie was attacked with acid, stabbed over 20 times, had his car set on fire, and was even blinded on one side when someone hit him in the eye with a hard-boiled egg. Throughout all of the attacks on him by angry fans, Freddie Blassie was actually read his last rites twice by priests.

Plagued by Health Problems and Injuries Classy Freddie Blassie (center) with The Iron and Sheik and Nikolai Volkoff at WrestleMania I (1985). photo: wwe.com

There are mixed reports about what exactly motivated Freddie Blassie to retire in 1986. Some stories have it that Freddie was physically unable to continue in the ring because of a serious knee injury. He was also 68 at the time, which is obviously much older than the majority of the roster. Others say that he would have kept on wrestling but was made to retire because of legal limits on the maximum age of professional wrestlers due to safety concerns.

Even after retirement, Freddie continued to appear at wrestling events. But his health was deteriorating. He was forced to be in a wheelchair when he would be shown on screen.

The Details of the Freddie Blassie Death Story

The Freddie Blassie death story really began during the early 2000s. The former wrestler’s health started to rapidly recline. As previously mentioned, Freddie was unable to walk without a wheelchair. Blassie appeared increasingly frailer and weaker. In May 2003, he was taken to the hospital because of problems with his heart and kidneys. He would never leave the hospital again, passing away on June 2, 2003, in Hartsdale, New York. Freddie Blassie was 85 years old at the time of his death. He had been involved with wrestling for 67 years.

Friends and the Community React to the Freddie Blassie Death News

Following the Freddie Blassie death arrangements, which included a funeral in Scarsdale, New York, many friends spoke about how much they loved Freddie. Shortly after his death, Bradshaw wrote a touching tribute to the deceased wrestler on the WWE website. Freddie Blassie was cremated and buried at the Resurrection Cemetery in Affton, MO. The plot is located at Section 11, Lot 538-A and is shared with Blassie’s mother, Anna Miletich. Have a comment about Freddie Blassie? Sound off in the comments section below!