In the mid 80s, Traylor began his wrestling career as the bodyguard to Jim Cornette and was known as “Big Bubba Rogers”. He carried his nightstick and wore his signature blue police shirt. He went on to wrestling fame when he joined the World Wrestling Federation in 1988; remaining with the company (for his first run) until 1993.

Big Boss Man makes his WWF debut on Superstars. He makes short work of a jobber and proceeds to handcuff him to the ropes while beating him mercilessly… not a bad way to start your heel gimmick (June 18, 1988)

Traylor was first introduced as “Big Boss Man” from the WWF. His police gimmick was actually fairly true to life – The Boss Man was a real life former prison guard in Cobb County, Georgia. Managed by Slick, the Boss Man entered the WWF as a heel, feuding and helping get over fan favorites like Hogan and Savage. By 1990, the Boss Man dropped his heel gimmick and began feuding with former Twin Tower partner Akeem, Bobby “The Brain” Heenan, and Nailz. 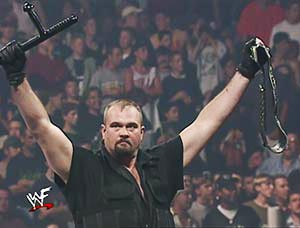 In 1993, Traylor briefly left WWF for All Japan Pro Westling, and then returned to America for the start of World Championship Wrestling (WCW).

He was in the WCW from 1993 to 1998, first joining as “The Boss” – apparently the WWF didn’t take too kindly to WCW using his familiar moniker and threatened with a lawsuit. Traylor’s character was then changed to The Guardian Angel (yeah, unfortunately it wasn’t very memorable). He did not see much success with his WCW tenure, but his career would eventually turn around.

Following his WCW run, Traylor rejoined the WWF. He once again took on his role as Big Boss Man, but his blue police shirt was swapped out for a SWAT-inspired uniform, all in black, complete with gloves and a bulletproof vest. He sometimes wore a mask to the ring. The updated character was a great fit for the WWF’s edgy Attitude Era.

In his final run with the company, Boss Man was part of Vince McMahon’s original Corporation stable alongside The Rock, Shane McMahon, Pat Patterson, and Gerald Brisco. Mostly involved in the Hardcore division, Boss Man also had an epic feud with Big Show which will probably always be remembered for how far it pushed the limits of the Attitude era – funeral crashing ring a bell??

Big Boss Man returns to the WWF in the late 90s. One of his most memorable feuds was with the Big Show – if any angle took it to the limits of the Attitude era, this one was it (Smackdown – November 11, 1999)

As with many wrestlers, Traylor passed away at a young age. The cause of the Big Boss Man death was a heart attack, which occurred on September 22, 2004. He died in his sister’s home in Dallas, Georgia. The Big Boss Man was only 41 years old at the time of his death.

The incident happened quickly and was shocking to all who knew Traylor. He was found by his wife, where she had only shortly before left him on the couch at about 10pm. His two children had been upstairs playing, while she had briefly left the room. She returned to find he had passed away. The later investigation into the Big Boss Man death determined he had suffered a massive heart attack.

Traylor left behind two daughters and his wife Angela. He and Angela were childhood sweethearts. At the time of his passing, his daughters were eight and 11. The sad truth is that many pro wrestlers have died young. The list is long, with Big Boss Man being a notable one. The pro wrestlers around Traylor’s age have passed at a rate that is about ten times that of football players of the same age.

Specifically, professional wrestlers are a shocking 12 times more likely to die from heart disease than other adults in the US between the ages of 25-44. They played larger-than-life characters to the public and died young, before their time.

Unfortunately the tragedy of wrestling dying young did not stop for the Big Boss Man.

Ray Traylor has been missed by fans and friends alike. Friends who knew his character’s accent was true to life with “gal dang it” being a part of Traylor’s regular vocabulary.

Boss Man will be most recognized as being part of Hulk Hogan’s era. The 80s was a time when wrestling was gaining mainstream attention and becoming massively popular.

Largely an upper-mid-carder, Big Boss Man had epic battles with Hogan, Andre the Giant, and Macho Man Randy Savage. The guy was incredibly agile in the ring for a big man. In real life, Traylor was a family man with a Southern drawl who died young and suddenly, before he was even 45 years of age. The Big Boss man will be missed. In Chris Benoit’s journal, he noted: “As Nancy and I left the church and watched them put Ray’s coffin into the hearse. We both waved goodbye one last time and I thanked him in my heart, and thanked God for putting him in my life and said I love you Ray.”

Update: WWE has announced Big Boss Man will be posthumously inducted into the class of 2016 Hall of Fame!

Have a comment about the Big Boss Man? Sound off in the comments section below!