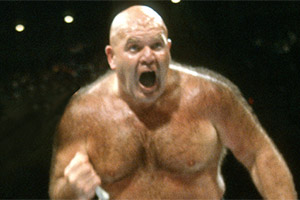 Jim Myers, better known to wrestling fans as George “The Animal” Steele, has died at age 79.

George was a WWE Hall of Famer with a storied career – not only in the wrestling ring, but also as a coach, teacher, and even an appearance alongside Johnny Depp in Tim Burton’s 1994 classic, Ed Wood.

Best known as a charismatic figure in the 80s, George “The Animal” Steele will forever be remembered for his wild antics in the ring – and that signature green tongue, which Steele admitted was a simple matter of eating green breath mints prior to entering the ring. In a 2008 interview, he joked “I had the best breath in wrestling.”

Early in his WWF career, George “The Animal” Steele was managed by fellow legend, Freddie Blassie.

By 1986, fans warmed up to The Animal, and he found himself in a memorable feud with Randy Savage, particularly showing a love interest in Savage’s valet, Miss Elizabeth.

Steele would go on to make sporadic returns to the WWE, including a run in the late 90s during the Attitude era as part of The Oddities.

According to his wife, Myers died from kidney failure. Eating turnbuckles – just another day in the office for the Animal. photo: wwe.com

He was in and out of hospice care throughout 2016.

Prior to recent health issues, Myers was diagnosed with Crohn’s disease in the late 80s, although it was said to have gone into remission with Myers no longer suffering from Crohn’s symptoms.

Looking back, it’s easy to assume that George “The Animal” Steele would be another goofy 80s wrestler who would fade into obscurity. The truth is, the guy with the green tongue who ate turnbuckles had earned his masters degree from Central Michigan University and was a teacher – which explains why The Animal only wrestled during the summer time early in his wrestling career.

Knowing that the end was coming soon, the late Jim Myers recorded a video just prior to his death. If you have an hour, it’s a pretty fascinating account of his life and career: