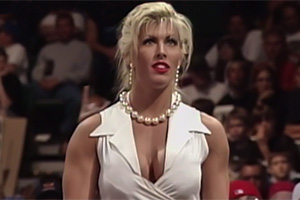 Marianna Komlos, known to wrestling fans as “Mrs. Cleavage” has passed away from breast cancer. She was 35. photo: wwe.com

Marianna Komlos, known to wrestling fans as “Mrs. Clevage”, spent a short period of time with the WWE in 1999.

Komlos worked as a valet for “Beaver Cleavage”, who was a repackaged version of Mosh from the Headbangers tag team.

The Beaver and Mrs. Cleavage characters were created after Mosh’ tag team partner, Thrasher, needed time off to recuperate from a knee injury. The gimmick, a bizarre incestual take on the 50s/60s TV show Leave it to Beaver, did not last long.

When the storyline was scrapped, Komlos was briefly transitioned into Mosh’ girlfriend while Mosh was repackaged as “Chaz”. 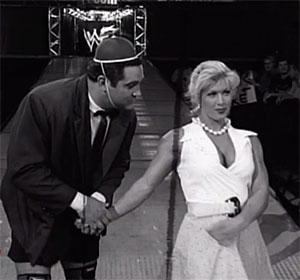 Like the Beaver Cleavage gimmick, this gimmick was also quickly dropped – feuds with “Meat” and Prince Albert did not help get anyone over, and the storyline of Komlos making up lies about being beaten by Chaz didn’t bode well either.

Komlos’ run in the world of professional wrestling was brief, and perhaps misogynist given the character she was assigned by WWE’s creative team – this was “The Attitude Era” after all.

The Attitude Era is where the WWE was selling sex more than they were selling in-ring wrestling. This was a business move that was criticized, but literally paid off for the company. The Attitude era is looked at as one of the most financially successful periods for the WWE, ultimately leading to the downfall of rival company WCW (whom had nearly put WWE out of commission in the years prior). 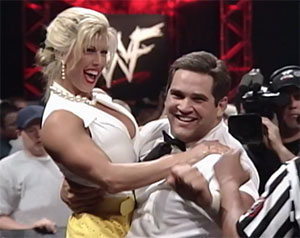 Mrs. Cleavage had a brief run in 1999 as the mother of Beaver Cleavage (better known as Headbanger Mosh). photo: wwe.com

Even though she left the world of professional wrestling within a year of her debut, Komlos had previously enjoyed a successful career throughout the mid 90s as a body builder. She was featured on numerous fitness magazine covers in 1997 including Muscle & Fitness.