Martin Ruane, known to wrestling fans as Giant Haystacks and Loch Ness – Dead at 52 from lymphoma.

Big men will always have a place in the world of professional wrestling where larger than life is seen as the norm, rather than the exception.

One such wrestler was Martin Ruane, who performed as “Giant Haystacks” in Great Britain and “Loch Ness” in WCW.

Although Ruane had limited exposure in North America, he enjoyed massive success in Great Britain, including brushes with the rich and famous such as Britannia’s Queen Elizabeth and Sir Paul McCartney.

Sadly, Ruane succumbed to lymphoma at the age of 52. 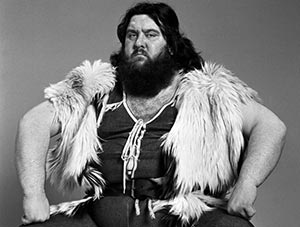 A Natural for the Ring

His Irish parents relocated him to outside Manchester where he attended St. Thomas’ School until he was 14.

At 14 years old, Ruane was close to his eventual height of 6’ 11”, making him a natural for anything involving size and strength.

Ruane worked in a timber factory, drove heavy machinery, and worked as a bouncer until a friend recommended he look into professional wrestling. According to one source, Ruane maintained his power by consuming a dozen eggs and three pounds of bacon every morning. Giant Haystacks with the Dynamite Kid

A promoter had Ruane wrestle as “Haystacks Calhoun”, naming him after the famous American wrestler of the same name. This naturally led to confusion between Ruane and Calhoun, but eventually Ruane became known as Giant Haystacks.

Ruane wrestled as a heel, crushing opponents with his big splash and enraging fans whenever he appeared on ITV’s Saturday, World of Sports.

There were few men the size of Giant Haystacks, but he found a formidable opponent in Kendo Nagasaki, as well as “Big Daddy” – a former tag team partner turned arch-rival:

Although Ruane achieved his greatest success in Great Britain, he traveled the world, including tours of Zimbabwe, India, and Canada. A Heel with Famous Friends

Although Ruane worked as a heel, he had a number of fans, including the Queen of England and the Beatles’ Sir Paul McCartney. McCartney and Ruane became friends, something which brought great pleasure to Ruane, particularly when McCartney asked him to appear in his 1984 film, Give My Regards to Broad Street.

Ruane was well-known in Great Britain, but eventually retired to become a debt-collector.

After knee surgery, he returned to action, heading to WCW.

A Brief but Memorable Run in the U.S.

In 1996, Ruane was recruited by WCW to join the Taskmaster’s (aka Kevin Sullivan) Dungeon of Doom group.

At 6’ 11″ and 685 pounds, Haystacks was perfect for the monster heel Hulk Hogan liked for his opponents.

Haystacks worked in WCW as “Loch Ness”, battling Hogan during the Dungeon of Doom’s quest to rid the world of Hulkamania.

Sadly, his WCW run would be short lived. Ruane was diagnosed with lymphoma (a form of cancer) and passed away on November 29, 1998.

Ruane was survived by his wife Rita Boylan and three sons.

While Ruane has been dead nearly twenty years, his legacy lives on as one of the legends of Great Britain’s Golden Age of Wrestling.

In 2011, the stage play Big Daddy vs Giant Haystacks was performed at the Brighton Festival Fringe, celebrating the careers and rivalry of both big men.

What are your memories of Giant Haystacks? Share them in the comments section below.