Rick Mcgraw died at the young age of 30, suffering from a heart attack believed to have been caused from steroid abuse andabusing the drug Placidyl. photo: wwe.com

Journeyman wrestler Rick McGraw found his career defined as much by the circumstances involving his death as his actual career. McGraw enjoyed modest success in the territories and seemed destined for a good run in the WWF as one of its top enhancement talents. However, a sudden heart attack took his life at age 30, shocking the wrestling world and leading to rampant speculation about the true circumstances of his death.

Starting Off in Florida

Born in 1955, Rick McGraw first entered the squared circle in 1976, beginning in Florida, and eventually traveling to territories such as Continental Wrestling, the World Wrestling Association, and Jim Crockett Promotions.

A memorable run in Memphis saw McGraw team with Troy Graham as “The New York Dolls,” a heel team that led to the creation of “The Fabulous Ones” when babyface Jackie Fargo claimed the Dolls had ripped off his “Fabulous Fargos” gimmick. McGraw enjoyed success in the WWF, with legendary babyface manager Arnold Skaaland taking McGraw on as a client for a time. McGraw worked mostly as enhancement talent, but like “Special Delivery” Jones, he was “a jobber to the stars,” the best at making opponents look good. One such incident involved McGraw involved in an injury angle where monster heel Killer Khan broke his neck. McGraw’s ability to sell a beating would lead to one of wrestling’s greatest urban legends.

In fall of 1985, McGraw participated in a high-profile angle where he confronted Roddy Piper on the set of “Piper’s Pit,” demanding to know why Piper never wrestled on television.

Sadly, Rick McGraw would be dead within one week of this segment

McGraw’s insinuation that Piper was afraid to fight was enough to provoke Piper into wrestling, but it also would have consequences in the ring. The next week, Piper wrestled McGraw (who antagonized Piper by wearing a “Hot Rod” shirt identical to Piper’s, then blew his nose in it).

McGraw showcased his abilities to make other stars look good, delivering offense to Piper to make it seem like he was a worthy opponent, then selling as Piper inflicted punishment on McGraw, including neckbreakers, suplexes, and even DDT’s. Piper pummeled McGraw, leading to a match stoppage by the referee. Piper taunted the fans, proclaiming, “Now you know why they don’t let me wrestle on television.” On November 1, 1985, not long after the match aired in WWF syndication, McGraw passed away at the young age of 30, leading some fans to speculate Roddy Piper beat McGraw to death. Keep in mind this was before Vince McMahon declared wrestling was “sports entertainment” so it’s easy to understand why fans suspected McGraw died from his beatdown.

The reality is McGraw died from a heart attack, the cause believed to have been due to steroid abuse or from abusing the drug Placidyl. Notably, Bret Hart wrote about how he saw McGraw abuse Placidyls in his book. Sadly, drug abuse linked to wrestler deaths would become even more prevalent into the 90s and 2000s.

Rick McGraw may not have been a main eventer, but his feud with Roddy Piper is still well remembered from fans of WWF’s golden era.

Rick McGraw is buried at the Evergreen Cemetery in Charlotte, North Carolina. 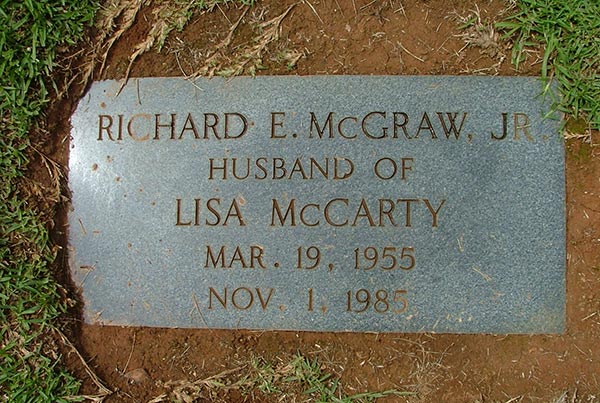