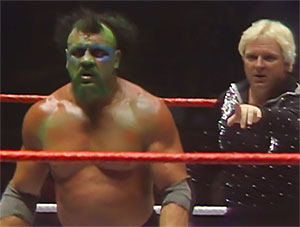 The Missing Link – Dead at 68. Here he is with manager, Bobby Heenan on a 1985 episode of Tuesday Night Titans. photo: wwe.com

From parts unknown, The Missing Link!

Link, born Byron Robertson, spent the early 80s with the NWA, and by the mid 80s had shifted over to a small role in the WWF where he was managed by Bobby Heenan.

His run with the WWF would prove short, never breaking out of the lower card.

The Missing Link makes his WWF debut in 1985

Robertson would see the most successful period of his career when he joined Frtiz Von Erich‘s Texas-based promotion, WCCW. He first entered the company in November of ’85, managed by Percy Pringle (who would go on to become Paul Bearer with the WWF). He was later managed by Skandor Akbar. 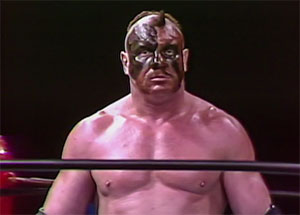 It was well known that Robertson struggled with substance abuse throughout his entire wrestling career.

In 2006, Robertson published an autobiography, Bang Your Head: The Real Story of The Missing Link. In the book, Robertson notes his struggles with substance abuse, including the use of steroids.

On August 16, 2007, Byron Robertson died after a battle with lung cancer. He was living in Hamilton, Ontario at the time, the same city in which he was born.