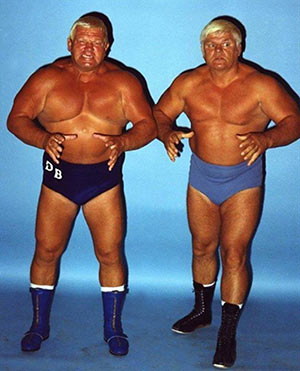 Dick the Bruiser (left) – Dead at 62 after suffering internal bleeding.

Richard Afflis earned his nickname “The Bruiser” while playing professional football, but he would become better known in the world of professional wrestling as “Dick the Bruiser,” a gravely-voiced fire hydrant who well, bruised his opponents. Dick the Bruiser and his tag team partner Crusher Lisowski

The future wrestling legend developed a reputation for roughing up opponents on the gridiron, playing college football for Purdue and Nevada. During the early 1950’s, Afflis played as an offensive lineman for the Green Bay Packers where his propensity for punishing opponents earned him the nickname, “The Bruiser.”

Afflis injured his esophagus during his football career, resulting in his trademark gravelly voice.

Dick the Bruiser was known for his toughness and brawling style, along with his determination to steamroll over all opponents. Bruiser won the National Wrestling Alliance’s Detroit version of the United States Championship on multiple occasions.

Although he wrestled as a heel, Bruiser had his share of fans. Similar to how Steve Austin got himself over in the late 90s, some wrestling fans couldn’t help but admire the one-of-a-kind no-nonsense brawler. Over time, the Bruiser became a celebrity in the Midwest. 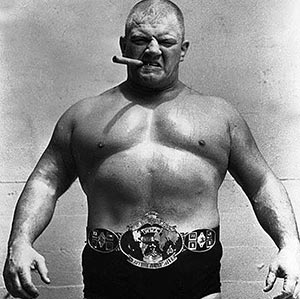 A heel who was rivaled by very few: Dick the Bruiser

Dick the Bruiser was a natural heel with his gravely voice, burly body, and ability to administer and receive tremendous amounts of punishment. Unfortunately, the Bruiser’s temper and lack of restraint got him into trouble from time to time.

One such incident occurred in Capitol Wrestling (the precursor to the WWWF) at Madison Square Garden. On November 20, 1957, Dick the Bruiser teamed with Dr. Jerry Graham to take on the beloved babyface duo of Antonino Rocca and Edouard Carpentier. The two heels (particularly the Bruiser) enraged the Garden fans by beating the babyfaces mercilessly. Finally, the fans could stand no more and a full-scale riot broke out.

Reportedly, over 300 people were hurt, including law enforcement.

Needless to say, the New York State Athletic Commission was upset and Capitol Wrestling nearly got kicked out of the Garden. The Commission imposed several punishments, one of which was banning Dick the Bruiser from New York indefinitely. Undaunted, Bruiser became involved in another infamous incident several years later. 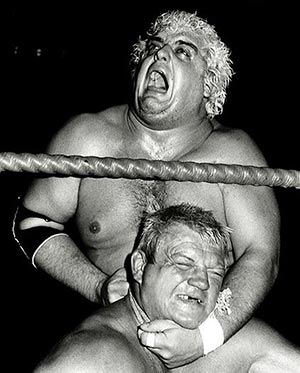 One of Dick the Bruiser’s regular opponents, Dusty Rhodes.

Back when kayfabe was king, and wrestlers protected the business’ worked nature like atomic secrets, it was difficult to determine fact from fiction.

In 1964 Dick the Bruiser and Wilbur Snyder purchased the NWA’s Indianapolis promotion, renaming it the World Wrestling Association (WWA). The WWA shared talent with Verne Gagne’s AWA and the WWA continued operations until 1989. The WWA featured a number of wrestling’s top stars as well as future stars such as Scott Steiner and Al Snow.

Dick the Bruiser worked in the AWA, battling the promotion’s Verne Gagne as well as a variety of other babyfaces.

The Bruiser won the promotion’s World Heavyweight Championship, defeating “Mad Dog” Vachon on November 12, 1966 for a seven-day reign before dropping the title back to “Mad Dog.”

Dick the Bruiser formed a rugged team with his brawling doppelganger, the Crusher.

The two battled some of the AWA’s toughest and craftiest teams, including the Texas Outlaws (Dusty Rhodes and Dick Murdoch).

Dick the Bruiser and the Crusher would hold the AWA World Tag Team Championship five times, for a combined reign of 1,325 days.

A Fitness Fanatic to the End

Although Dick the Bruiser retired from wrestling, he maintained a robust workout regimen, lifting weights and performing calisthenics.

Sadly, a workout is believed to have caused his death after he ruptured a blood vessel in his esophagus while weightlifting, subsequently bleeding to death on November 10, 1991.

Mr. Afflis was 62 years old at the time of his passing.

He is buried at the Washington Park North Cemetery in its Garden of Resurrection Mausoleum in Indianapolis, Indiana.

After the loss of Bruiser, several other notable wrestling stars passed away in the 90s including Art Barr, Buddy Rogers, Bobo Brazil, Dick Murdoch, Eddie Gilbert and Kerry Von Erich. 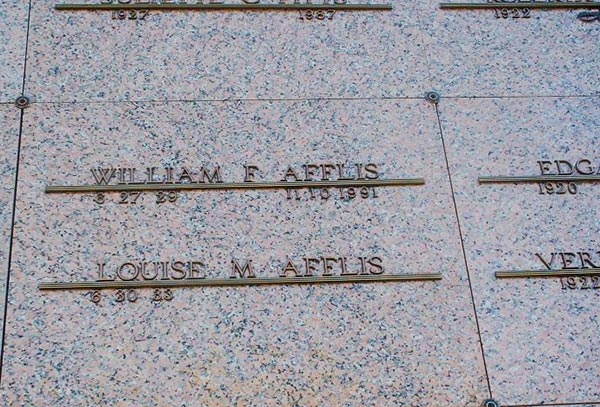