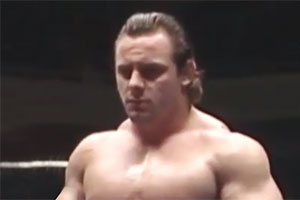 Born in Golborne, Lancashire (United Kingdom) on December 5, 1958, Thomas Billington would defy the odds, becoming an innovator in professional wrestling despite his height of 5’8”.

Working as the Dynamite Kid, Billington became the toast of Japan where he worked legendary bouts in singles competition. However, Dynamite’s greatest fame came when he teamed with real-life cousin Davey Boy Smith to form the British Bulldogs, the hottest tag team in the WWF in the 1980s.

Unfortunately, as bright as Billington’s legacy was in the ring, his out-of-ring reputation was as dark. Sadly, Billington’s high-impact style shortened his career and he spent years confined to a wheelchair. 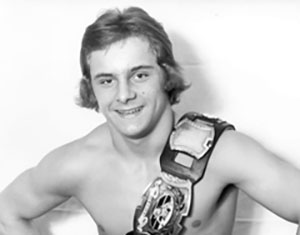 Tom Billington’s father Bill worked as a coal miner, with Tom looking to escape the same path via wrestling. Billington trained in England with Ted Betley, beginning his wrestling career in 1975 as the Dynamite Kid.

In 1977, the Dynamite Kid traveled across the Atlantic to work in Stu Hart’s Calgary Stampede Wrestling. The fans were astonished by the Kid’s dynamic, high-flying style, a style that helped him overcome a small stature for a wrestler. Before long, Dynamite was working against Stampede’s babyfaces including his cousin, Davey Boy Smith.

The Dynamite Kid’s work caught the attention of Japanese promoters and he was brought into New Japan Pro Wrestling where he quickly established himself as one of the best junior heavyweights in the world. Whether he worked against the WWWF Junior Heavyweight Champion Tatsumi Fujinami or the first Tiger Mask (Satoru Sayama), Billington kept fans on the edge of their seats as they wondered what move he would pull off next. Dynamite’s two-year program with Tiger Mask captivated the fans, leading to an award in the Wrestling Observer Newsletter for Match of the Year in 1983.

In 1984, the Observer honored Dynamite with its awards for “Best Flying Wrestler,” “Best Technical Wrestler” (tied with Masa Saito), and the “Best Wrestling Maneuver” (his power clean dropkick). 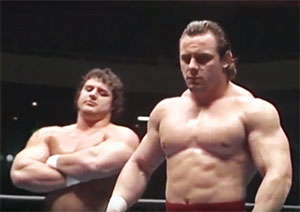 A bulked up Dynamite Kid and Davey Boy Smith on December 12th, 1985.

In 1984, the Dynamite Kid was paired with Davey Boy Smith in the WWF where they formed the British Bulldogs. As good as both men were in the ring, they used steroids in order to put on muscle mass so as to look good alongside the WWF’s larger-than-life size wrestlers. Smith’s 160-pound body soon swelled to between 195 and 205 pounds, making him look impressive, but taking a toll on his body. Both wrestlers’ steroid use would take a heavy toll on their health. Working a style that was new to WWF fans, the Bulldogs got over quickly in the promotion. The 1980s is seen by fans and historians as the sport’s “Second Golden Age of Tag Teams” with pairs such as the Road Warriors, the Hart Foundation, Arn Anderson and Tully Blanchard, the Rock-n-Roll Express, and the Midnight Express exemplifying the best of the best when it came to tag teams. As highly regarded as all those teams were, the case can be made that the British Bulldogs were the absolute best. They did not draw as much as the Road Warriors, but their work in their heyday was second to none. The Wrestling Observer honored the Bulldogs as its “Tag Team of the Year” in 1985.

The British Bulldogs would hold the WWF Tag Team Championship just once before dropping the titles to the Hart Foundation in 1987. A 1986 back injury sidelined Billington but he had Smith carry him to the ring in order to drop the titles.

Things deteriorated from there with the Bulldogs working their last WWF match in 1988. Unbeknownst to Billington, Smith trademarked “The British Bulldogs” name, preventing Billington from using it after the two split.
Mounting Injuries and Retirement

Plagued by back and leg ailments, Dynamite hung up his boots in 1991. Although he returned to the ring for a match for Japan’s Michinoku Pro in 1996, he was a shell of himself. Billington’s hard-hitting style (including his use of the diving headbutt) devastated his body, and his use of illegal drugs and anabolic steroids undoubtedly worsened things. Billington suffered seizures, heart problems, and the aftereffects of concussions. One of Billington’s legs was amputated and the man who had once defied gravity was confined to a wheelchair for the rest of his life. Embittered by an industry which had seemingly turned its back on him and living a hand-to-mouth existence, Billington lashed out at the WWF and joined many of his fellow wrestlers in the class-action lawsuit filed for concussion-related injuries (that lawsuit was eventually dismissed). Tommy Billington aka Dynamite Kid in 2012.

While Billington’s work as a wrestler was ahead of its time, his personal life was tarnished by bullying in and out of the ring. Billington was well-known for taking liberties with opponents in the ring, intentionally hurting them. He was also known for his cruel pranks out of the ring that some saw as sadistic. Billington’s behavior led to an incident where a furious Jacques Rougeau, Jr. slugged Billington in the mouth with a roll full of quarters.

Nonetheless, Billington was not without friends in the industry and his legacy in the ring will undoubtedly continue to impress new generations of fans.

Tommy Billington died on December 5, 2018, his 60th birthday. Although a cause of death was not made public, his health had been deteriorating in recent years.

What are your memories of the Dynamite Kid? Let us know in the comments section below.