Rhonda Ann Sing grew up around professional wrestling. As a child, she attended Stampede Wrestling events with her mother. During the late 1970s and throughout the 1980s, Sing would change the world of the All Japan Women wrestling circuit, competing under the name Monster Ripper. She would later become known as Bertha Faye in the ring of the World Wrestling Federation.

Sadly, her career ended quickly, and fans and fellow wrestlers would receive word of the Bertha Faye death news much too soon.

Disappointing Runs in the WWF and WCW

Weighing 260 pounds and standing at 5 foot 8 inches tall, Bertha Faye was very different from the other women who competed in the WWF. She stood out immediately when she first appeared on the scene in 1995. Due to her size, Rhonda often faced off against men rather than women, and she managed to quickly earn the respect of her fellow wrestlers due to her impressive abilities and signature moves like the Big Bertha Bomb and the Body Avalanche.

Although she was friends with many of the male wrestlers, Rhonda felt at odds with Vince McMahon. She said she felt like she was a prostitute due to the sexualized and comical way that she was often portrayed. Disappointed in her gimmick, Rhonda asked to terminate her contract and she left the WWF in 1998.

Sing briefly appeared with WCW in 1999 and 2000 but similar to her experience in the WWF, she was mainly used as comic relief. 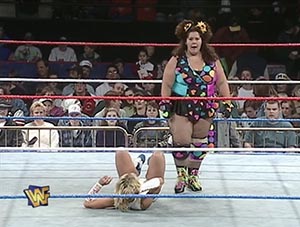 In her short run with the WWF, Bertha Faye feuds with women’s champion, Alundra Blaze. She would eventually take the belt from Blaze at SummerSlam ’95. photo: wwe.com

After retirement, Rhonda mostly remained out of the eyes of the press. She did occasionally give interviews and when doing so, she wasn’t shy to say that she didn’t enjoy her time wrestling with the WWF.

To earn a living, Sing worked as a caregiver for physically disabled people and was working in the field up until her death on July 27, 2001. She was only 40 years old.

The Bertha Faye death cause was ruled to be a heart attack likely due to complications from diabetes. Her weight is believed to have played a role as well.

The Bertha Faye death news deeply saddened friends from the world of professional wrestling. At her funeral held on August 3, 2001, a number of well-known wrestlers were in attendance. Bret Hart was on hand for the event and ended up writing a tribute to Bertha Faye, describing how she was accepted by the male wrestlers and was a very giving and warm woman. Other friends like The Great Gama and Bad News Brown spoke about her as well, sharing similar sentiments as Hart.

May 1995: On WWF Superstars, Bertha Faye pins a jobber after a sitting powerbomb. She would be dead 6 short years later.

Rhonda Sing’s grave is located at Mountain View Memorial Gardens in Calgary, Alberta, Canada. The plot is located in the “Everlasting Life Lot” 249 Plot B4.

Rhonda is buried with her parents, Jack and Elsie. Rhonda Sing’s grave in Calgary, Alberta. She is buried with her parents, Jack and Elsie. photo: milou

Remembered by Fans and the Wresting Community to This Day

Rhonda Sing may be gone, but she has not been forgotten. Two years after her death, she was given a posthumous award from the Cauliflower Alley Club. Fans continue to leave tributes to Rhonda on the Internet, remembering her for both her reign as WWF Women’s Champion, and a two-time WWWA World Heavyweight Champion.

Have a comment about Rhonda Sing? Sound off in the comments below!