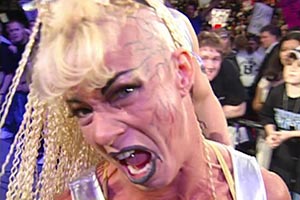 Throughout the 90s, most women in the world of professional wrestling were little more than eye candy – designed by the wrestling industry to look good while valeting their male counterpart to the ring. But Luna Vachon was different than her female contemporaries. The adopted daughter of wrestling legend Butcher Vachon, Luna could actually wrestle.

Skilled in the ring, Luna was a force to be reckoned with. In 1995, she would be named among the top 500 singles wrestlers by Pro Wrestling Illustrated. And her talents didn’t end in the ring. She was a gifted entertainer on the mic and cut many memorable promos.

Although Luna was always over with fans and well-respected from men and women in the wrestling industry, her life was marked by tragedy. Ultimately, the Luna Vachon death story would result in the end of her life at an early age.

Stress and Loss Before the Luna Vachon Death Story

Luna Vachon’s life was a true struggle. The former wrestler was faced with bipolar disorder. She tried to find solace in religion but it seems that becoming a born again Christian did little to ease her pain. Adding stress to her life was a tragic 2009 house fire that destroyed nearly all of her belongings. While Luna Vachon did not die until the following year, it’s possible that the hardships that she faced sent her over the edge and contributed to the behavior that would lead to her death.

The Luna Vachon Death Story Comes at a Time of Tragedy

On August 27, 2010, Luna Vachon died at her home in Pasco County, Florida. The former wrestler was 48. Her body was discovered by her mother who had stopped by for a visit. Anytime that a former wrestler dies suddenly, the wrestling community is shocked and saddened, but in Luna Vachon’s case it was especially difficult, as seven other notable wrestlers died in August 2010.

3 years before her death, Luna Vachon takes on Jessicka Havok at CAPW Day of Legends (August, 2007)

The Findings of the Luna Vachon Death Examination

As soon as Luna Vachon’s death was announced, websites began speculating that the former wrestler committed suicide. TMZ was quick to report that drugs were found in her home. Authorities confirmed they found drug paraphernalia including crushed pill residue and snorting straws.

Following her death, Luna Vachon was cremated. Her family decided to scatter her ashes at the ranch of her longtime friend Andre the Giant. Andre himself had passed away in 1993 due to congestive heart failure.

Shortly after the news of her passing, many professional wrestlers expressed their sympathies for Luna Vachon’s family. In 2011, Women Superstars Uncensored added Luna Vachon to their hall of fame. A number of tribute sites and social media groups dedicated to Luna Vachon exist to this day. Fans of the early and mid 90s era of the WWF will fondly remember Luna as not only Bam Bam Bigelow‘s “main squeeze” (and briefly a valet for Shawn Michaels) – but also as an intimidating force to be reckoned with in the ring. Luna Vachon’s ashes were scattered at the former ranch of Andre the Giant, in rural North Carolina. photo: unknown

Luna Vachon was cremated. Her ashes were scattered at the former ranch of Andre the Giant in Ellerbe, North Carolina.

Have a comment about Luna? Sound off in the comments section below!