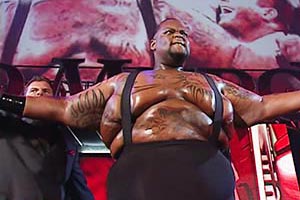 Big Daddy V dies of a heart attack. He was 43. photo: www.com

Big Daddy V was a true heavyweight in the world of professional wrestling. Standing at 6 feet, 9 inches and weighing roughly 500 pounds, the wrestler from Harlem had a big personality in and out of the ring. Known as Nelson Frazier, Jr., to friends and family, he achieved modest success in the WWE during the 1990s and in the late 2000s. Sadly, his career was cut short, as he passed away at the age of 43.

The Many Faces of Big Daddy V

Nelson Frazier first entered the pro wrestling scene at the age of 21 as Mabel in 1993. By 1994, he and partner Mo secured the Tag Team Championship under the moniker Men on a Mission. Although fairly cringe-worthy today, the goofy, colorful gimmick worked well with the WWF’s family-friendly image at the time.

By 1995, Mabel was competing on his own, winning the King of the Ring Tournament that year. After the win, he appointed himself the nickname “King Mabel” and turned heel.

Ultimately, he didn’t manage to draw a large fan base and was dropped by the WWE. He would go on to have three more major stints in the WWE, first and secondly as Viscera from 1999 to 2000. Here he partook in the “Ministry of Darkness” angle with the Undertaker, the Acolytes (Bradshaw and Farooq) and Mideon. When the faction was broken up in 1999, he was soon released from the WWF and entered the independent circuit.

The full story of the death of Big Daddy V isn’t completely known, but some details have emerged. It seems that on February 18, 2014, Frazier had gone into the bathroom to take a shower and then began having chest pains. An ambulance was called to the scene, but the wrestler had suffered a massive heart attack. It’s not known whether he was pronounced dead at the scene or later at the hospital. The event happened just 4 days after he turned 43. 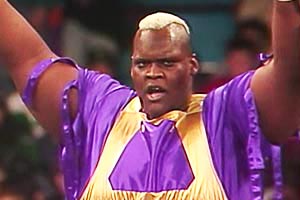 Nelson Fraizer first entered the WWF as “Mabel” – one half of the tag team Men on a Mission. photo: wwe.com

Cause of Big Daddy V Death

While the massive heart attack was the actual cause of the Big Daddy V death, there were some extenuating factors that apparently contributed to it. His death certificate stated that morbid obesity and heart damage due to type 2 diabetes, a common complication of obesity, were responsible for his heart attack.

In addition, drugs and alcohol were present in his bloodstream at the time of his death. It’s likely that these substances increased strain on his heart and made the heart attack more likely to occur.

Since Big Daddy V’s death came at such a young age, fellow wrestlers were obviously stunned and saddened by the news. Many of them took to social media to pay tribute to their friend. Jim Ross and Rob Van Dam were among the many personalties who Tweeted goodbye messages and well wishes for Big Daddy V’s family during the days following his death. The wrestling star was honored with a private family funeral. He was ultimately cremated. His ashes were distributed between 500 pendant necklaces, which were given to friends and family members.

Sadly, paying tribute to the memory of the wrestler following Big Daddy V’s death has been overshadowed largely by litigation revolving around his passing away. While other wrestlers who have died young like Frazier have been honored with awards and receptions the year after they passed away, much of the attention has been on the details of a wrongful death lawsuit filed by Cassandra Frazier. Nelson Fraizer as “Viscera” during the WWF Attitude era. Here he partook in the Undertaker’s “Ministry of Darkness” angle. photo: wwe.com

In the lawsuit, Cassandra Frazier and her attorney blame the WWE for being at least partially responsible for Big Daddy V’s death. She claims that the company knew that repeated blows to the head caused by wrestling increased the risk of concussions and posed a risk for traumatic encephalopathy, a dangerous swelling of the brain.

The court case documentation states that Frazier had problems with short term memory and suffered painful migraines. They stated he had crippling depression due to head injuries sustained during his time with the WWE, and it blames those problems for contributing to the death of Big Daddy V.

At first, when word of the Big Daddy V death lawsuit reached the papers, the WWE kept relatively quiet about the matter. A lawyer for the WWE, Jerry McDermitt did say that it was ridiculous to blame the organization for Frazier’s death. They said he was overweight and clearly had health problems. It seems that the WWE hoped the lawsuit wouldn’t proceed further, but it has.

In June 2015, the WWE followed up on their statement, releasing more information about Frazier’s medical conditions and publishing his salary information. Lawyers also revealed that Cassandra Frazier had already received $10,000 from them because she claimed financial hardship. Essentially the WWE accused her of bringing a frivolous lawsuit to try and make money from her husband’s untimely death.

Have a comment about Nelson Frazier? Sound off in the comments section below!