Johnny Grunge, one half of Public Enemy – Dead at 39. photo: wwe.com

After a few years on the independent circuit, their partnership came to a halt and within a short time, the Johnny Grunge death story would shake the wrestling world. Another wrestler, dead before 50.

A Tragic Loss Before the Johnny Grunge Death Story

Wrestling together for many years, Rocco Rock and Johnny Grunge were inseparable. The two were like brothers and remained in close contact. On September 21, 2002, Rocco Rock, or Ted Petty as he was known to friends and family, died of a massive heart attack on his way to a wrestling event. Reportedly, Johnny Grunge took the news very hard. It has been said that Mike Durham never got over the death of his former wrestling partner and friend, and many people believe that the stress and heartache caused by the loss likely contributed to Johnny Grunge’s death. Public Enemy: Johnny Grunge and his tag tag team partner, Rocco Rock, enter the ring carrying a table on a 1997 episode of Monday Nitro. Rocco would be dead within 5 years, and Johnny within 10. photo: wwe.com

During his time wrestling, Durham weighed 263 pounds and stood at a height of 6 foot 3 inches. By doctor’s standards, he was considered to be obese. The professional wrestler was also known to have a number of health problems, including sleep apnea.

On February 16, 2006, Mike was visiting a friend in Peachtree City, Georgia, when he was suddenly unable to breathe. Alarmed, his friend called paramedics and Johnny Grunge was rushed to the hospital. Sadly, he could not be revived and he died on the way to the hospital. He was pronounced dead on the scene in Atlanta, Georgia.

Following his death, it was revealed that Durham had died because of a coronary artery blockage due to obesity. The wrestler was only 39 years old at the time of his death. Public Enemy takes on Harlem Heat during a 1997 episode of WCW Monday Nitro. Johnny Grunge would be dead within 10 years. photo: wwe.com

Although Mike Durham was no longer actively involved with any major wrestling promotion, the news of his death came as a massive shock to the wrestling community. On February 25, 2006, The Ring of Honor wrestling show in Edison, New Jersey, rang the bell 10 times in memory of Johnny Grunge. The International Wrestling Cartel did the same at an event on February 18, 2006.

On June 16, 2007, Mike Durham was added to the New Alhambra Arena Hardcore Hall of Fame. Today, his wrestling name and real name fly on a banner in the former ECW arena beside Rocco Rock’s flag, so the two are forever side by side. In 2010, the New England Pro Wrestling Hall of Fame also added Johnny Grunge to their Ranks along with Rocco Rock. 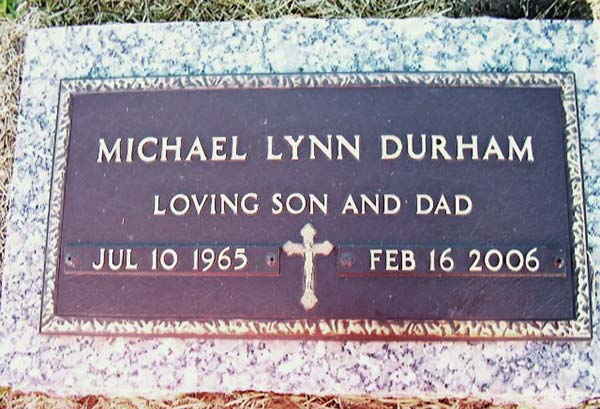 The grave of Johnny Grunge at the Mimosa-Pines South Cemetery in Carlyss, LA. photo: Melissa Daigle

Have a comment about Johnny Grunge? Sound off in the comments section below!