Vince McMahon Jr. aka Vincent Kennedy McMahon is a household name known worldwide as the kingpin of the WWE. However, while not-so-well-known to the general public, Vince’s father, Vince McMahon Sr. (aka Vincent James McMahon), was one of the most important figures in professional wrestling, promoting not only one of the biggest territories in professional wrestling but also one of the most prestigious.

According to Tim Hornbaker’s landmark treatise on the McMahon family, Capitol Revolution, McMahon started his official promotion on January 7, 1953, continuing his father Jess McMahon’s legacy of promoting, a legacy continued to this day by Vincent K. McMahon.

Vincent James McMahon was born on July 6, 1914. His father Roderick McMahon (aka “Jess” McMahon) promoted boxing, concerts, and later, professional wrestling. Young Vince joined his father at events, watching and learning about the family business. In 1942, Vince joined the U.S. Coast Guard, serving during World War Two until his discharge in 1945.

Vince McMahon Sr. began promoting boxing and wrestling but saw that television would boost the business. McMahon promoted wrestling through the Capitol Wrestling Corporation, joining the National Wrestling Alliance (NWA) and focusing his promotion in the northeast.

A tag match between the teams of Eduardo Carpentier / Antonio Rocca and Dick the Bruiser / Dr. Graham led to a post-match riot, with the police being called in and the New York State Athletic Commission threatening to shut down wrestling in the Garden. Fortunately for McMahon, he was able to minimize the penalties and continued.

McMahon learned how to keep his fans busy and brought in the most popular wrestler during his time promoting. This man was Bruno Sammartino, an Italian native who had nearly died as a child while hiding out from the Nazis during World War Two and helped improve his health through a strenuous weight-lifting regimen.

Sammartino’s appeal to McMahon’s Italian-American wrestling fans helped drive ticket sales, but Bruno also appealed to a large array of fans as a babyface ready to dish out justice to any heel who crossed his path or did him wrong.

In 1963, McMahon began promoting under the name the World-Wide Wrestling Federation. McMahon decided to part ways with the NWA and venture out independently. McMahon brought in former NWA World Heavyweight Champion, “Nature Boy” Buddy Rogers, placing the WWWF Championship on him after claiming Rogers won the belt in a tournament in Rio De Janeiro (not the last time the city would hold a fictitious tournament). However, Rogers’ health took a turn for the worse due to a strenuous schedule, and Rogers sustained a heart ailment (possibly even a mild heart attack).

On May 17, 1963, Bruno Sammartino defeated Buddy in a squash match to become the promotion’s second champion. With Bruno Sammartino as his champion, McMahon’s wrestling promotion dominated the northeast, and business proved so profitable that Sammartino held the belt for a record seven years, eight months, and one day.

Wrestling lore has it that Bruno had to beg McMahon to take the belt off him because Sammartino was still a top draw. Finally, McMahon had Bruno drop the title to the villainous Ivan Koloff, a moment so shocking that it became known as “The Night the Garden Went Silent” due to the fans watching in silent disbelief.

Although Vince McMahon Sr. knew that Bruno Sammartino could never be replaced, he found a suitable champion in Puerto Rican star Pedro Morales and the WWWF continued doing well. By the early 1970s, Vince had even rejoined the NWA, leading to various territories sending their wrestlers to the WWWF. Madison Square Garden earned its name as “The Mecca of Professional Wrestling” not only for the WWWF’s many star attractions but the star attractions from other promotions who traveled to work at the Garden.

By 1973, Vince had persuaded Bruno for a second run as WWWF Champion, which proved lucrative for both McMahon and Sammartino since Sammartino negotiated a percentage of the ticket sales from events he worked out. Like any good promoter, McMahon built up a solid undercard of heels and babyfaces to keep the fans entertained. It’s important to remember that McMahon promoted when arena ticket sales were the core of any promotion’s revenue.

Like his son, McMahon was a visionary who could see opportunities for money. In the early 1970s, cable television was beginning to take shape, and the WWWF provided Madison Square Garden events to New York City-based cable stations Sterling Communication and Teleprompter Manhattan Cable. Not long after, the WWWF began providing Home Box Office with content.

One of McMahon’s biggest coups was his signing of Andre the Giant. McMahon rightfully saw a one-of-a-kind wrestler in the Giant and booked him throughout the world to keep his character fresh. From there, Andre remained with the McMahon family for nearly his entire career. 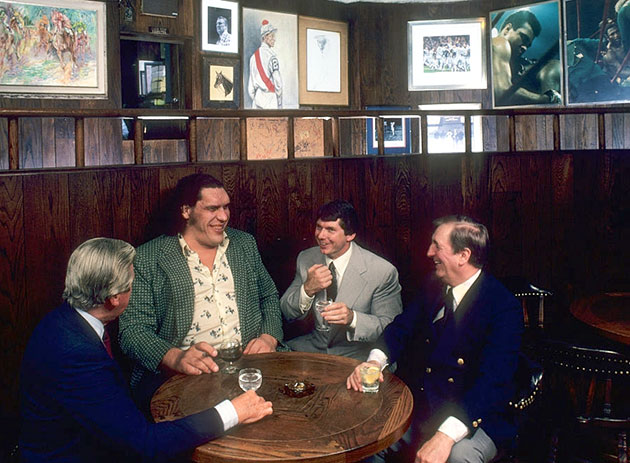 Not every venture proved to be a success.

What looked like a can’t-miss dream match between Bruno Sammartino and then-WWWF Champion Pedro Morales fizzled when it was held at Shea Stadium in 1972 (aka Showdown at Shea). Although the card wasn’t a complete failure, unseasonably cold weather cut into ticket sales.

In 1976, a second Showdown at Shea featured a closed-circuit broadcast of the poorly-received boxer vs. wrestler bout between Muhammad Ali and Antonio Inoki. Fortunately for McMahon, he averted a box office disaster by airing a Bruno Sammartino vs. Stan Hansen bout.

The 1970s was a great time for WWWF fans as the promotion crowned two new champions—the colorful heel wrestler Superstar Billy Graham and later, “All-American” Bob Backlund, a decorated amateur wrestler. During these reigns, the WWWF held title unification bouts with the NWA World Heavyweight Champions at the time, creating some highly-regarded matches.

The 1970s also saw Vince McMahon on WWWF television. However, it wasn’t Vincent McMahon Sr., but his son Vincent Kennedy McMahon. The younger McMahon learned the business from behind the scenes and in front of the camera as he called WWWF matches as an announcer.

An Admired Promoter but No Saint

Rare is the wrestling promoter who is esteemed by his wrestlers or even other promoters. However, Vince McMahon Sr. earned a reputation as a generous promoter who, for the most part, played fair with his wrestlers and other promoters. Nonetheless, McMahon had his moments of ruthlessness, including his rumored blacklisting of Bruno Sammartino and his exit from the NWA.

Ironically, McMahon would bring Sammartino back, making him his company’s number-one star. In 1976, McMahon begged Sammartino to return from a neck injury before he was fully healed in order to save the WWWF’s 1976 Showdown at Shea card. Thankfully for McMahon, Bruno didn’t hold a grudge.

McMahon’s dealings with the NWA illustrated how opportunistic he could be. After helping to secure the NWA World Heavyweight Champion for Buddy Rogers, McMahon ignored NWA traditions by booking Rogers in larger markets, ignoring the policy that the champion would defend the belt everywhere to help out every member of the NWA. McMahon also plotted his exit from the NWA, building Rogers up as a popular star to benefit his promotion when he eventually parted with the NWA.

Nevertheless, McMahon’s behavior was nothing unusual for the cutthroat world of wrestling promoters, and he is generally regarded as one of the industry’s few gentlemen.

Vince McMahon Sr. continued bringing in top talent until the end of his days as a promoter. The WWWF became the World Wrestling Federation (WWF) in 1979, but the McMahon went with his tried-and-true formula of having heel wrestlers work their way up the ranks until they challenged the WWF Champion, with matches typically beginning in Madison Square Garden then working their way throughout the WWF’s other markets.

In 1982, the wrestling world enjoyed another boom as various territories thrived across North America. However, the glory days of the territory were not destined to last. On June 5, 1982, Vincent Kennedy McMahon purchased Capitol Wrestling (aka the WWF). As fans know, Vincent McMahon Jr. turned the WWF into a national promotion, bankrupting many of the wrestling industry’s territories.

Vincent McMahon Sr. passed away before the WWF reached new heights with its national tours and the success of 1985’s WrestleMania.

Vincent McMahon Sr. is buried at Our Lady Queen of Heaven Cemetery in Broward County, Florida.

Other pro wrestling names who died in 1984 include David Von Erich, and actor / comedian Andy Kaufman, who feuded with Jerry Lawler in the early 80s.

What are your favorite memories of Vincent McMahon Sr.’s work as a promoter? Let us know in the comments below.