Believe it or not, Ernie Ladd could nearly stand toe to toe with Andre the Giant. At 6’9” and 300-plus pounds, Ladd cast a fearsome path wherever he walked. A gifted football player, Ladd easily transitioned into becoming a wrestler. Ladd portrayed a heel at a time when African-Americans faced prejudices for the color of their skin, let alone for whether they played a hero or villain.

Outside the ring, Ladd served the community by reaching out to disadvantaged kids, warning them of the dangers of the streets, but also sharing them the possibility of success through perseverance and hard work. 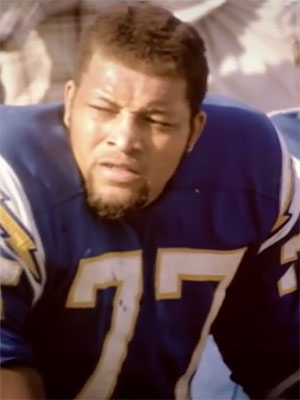 Ernie Ladd with the San Diego chargers in the early 60s

From Gridiron to Grappling

Born in Louisiana and raised in Texas, Ernie Ladd attended Grambling State University on a basketball scholarship after excelling in high school at both football and basketball.

Ernie Ladd enjoyed spectacular success in the American Football League (AFL), playing 112 consecutive games in a row. Ladd played for the AFL team the San Diego Chargers, and later, the Houston Oilers and Kansas City Chiefs. Ladd made life miserable for opponents as a defensive tackle, earning honors such as an AFL Championship, three All-Pro awards, and four appearances in the AFL All-Star Game. His surprising quickness earned him the nickname “The Big Cat.”

The feared and respected football star entered wrestling after some local wrestlers challenged Ladd to a private workout session. Before long, Ladd was wrestling during football’s off-season. As successful as he was in football, Ladd could not resist the paychecks of the squared circle. Bear in mind that back in the 60’s, football players made a fraction of what they make today, even adjusted for inflation.

“After a few years, I was making so much money wrestling in the off-season that I figured I could make a lot more by giving up football and wrestling full time,” Ladd told The Times. “I quit football at 28 and still had several good years left. That first year wrestling, I made $98,000, and after that never made less than a hundred grand a year. That was big money back in the ’60s.”

A Successful Wrestler and Booker

Ladd’s success as a football player led to amazing success in the ring. “The Big Cat’s” size and fearsome reputation made him a natural heel. While promoters were leery to cast an African-American as a heel because of racial prejudices, Ladd’s box office success overruled any hesitations on promoters’ parts.

Ladd occasionally worked babyface, but usually did so when he entered a promotion, only to turn heel on the area’s top babyface. Ladd became notorious for using his taped thumb to cheat his way to victory. Given his size and power, he didn’t have to cheat, but he was Ernie Ladd so who was going to tell him otherwise?

“The Big Cat” worked a number of territories in the National Wrestling Alliance and worked memorable feuds in the World-Wide Wrestling Federation, including runs with WWWF champions Bruno Sammartino, Pedro Morales and Bob Backlund, as well as rival big men such as Haystacks Calhoun, and Andre the Giant.

As his career began to slow down, Ladd became a booker in Bill Watts’ Mid-South Wrestling. While fellow promoters questioned Watts’ decision to put an African-American in a position of power, Watts ignored them. Ladd became a respected and successful booker, helping to establish the Junkyard Dog as one of wrestling’s greatest stars.

Ernie Ladd never shied from using his clout to fight for civil rights. Outside the ring: Ernie Ladd was an important figure in the civil rights movement of the 60s.

In 1965, Ladd participated in the civil rights boycott of New Orleans, the city selected for the AFL All-Star Game. When African-American players arrived in New Orleans, they were discriminated against including cab drivers refusing to take them and bars denying them entry. This resulted in white and black players standing together and refusing to play the game, which in turn resulted in the AFL hastily moving the game to Houston.

Ladd continued fighting for civil rights. Behind the scenes, he shared his life experiences and wisdom with those around him. In a 2014 article with Fox Sports, Jim Ross recalled his friendship with “The Big Cat”:

“Those nights in Shreveport, where my room would fill with smoke and the smacking of dominoes on a table, were some of the best days of my life. Not only did I learn invaluable life lessons that I still use, but I also was educated on the fine art of pro wrestling psychology by a master strategist.”

Ernie Ladd also reached out through a Christian ministry, including outreach efforts to prison inmates. Ladd tirelessly gave back to the community, including his work as a youth basketball coach. Ladd became involved in politics as well, throwing his support behind whomever he felt deserving of the rub that came with his reputation.

A Fighter Until the End – Ernie Ladd’s Death

In 2003, Ernie Ladd was diagnosed with colon cancer.

Ladd endured the disease for three years, ignoring the doctor’s diagnosis that he only had months to live. “The doctor told me I had three to six months to live…I told the doctor that he’s a liar and that Dr. Jesus has got the verdict on me! I also told him, ‘You’re working with a miracle when you work with me.” Ernie “The Cat” Ladd in his later years