Chri$ Ca$h was an up-and-coming wrestler on the indie scene in the early 2000s. Sadly, his life was taken at just 23 while a passenger on a motorcycle.

According to SLAM! Wrestling, Bauman Jr. trained at Combat Zone Wrestling’s training academy in 2001. He debuted on September 22, 2001. Standing 6’3” and weighing 195 pounds, Bauman became a top star in the promotion.

His work in CZW as Chri$ Ca$h drew praise for his innovative move set and willingness to perform crazy spots.

While the young star’s only title in CZW was the CZW World Tag Team Championship (which he held with his Team Ca$h colleagues J. C. Bailey, Nate Webb, and SeXXXy Eddy), he competed against many rising indie stars including Ruckus, Sonjay Dutt, Kip Sabian, and Nick Gage.

On August 18, 2005, Chri$ Ca$h died while a passenger on a motorcycle his cousin Jeremy Bauman was operating.

An obituary at the site Wrestleview notes:

The Philadelphia Inquirer reported the motorcycle Bauman was riding was on Ellis Street in Glassboro, NJ when a Ford Taurus driven by a Daisy Gwin, of Glassboro, NJ, turned in front of it from Higgins Drive at about 9:15 pm, with the motorcycle striking the car on the driver’s side.

Ca$h’s cousin and the driver of the Ford Taurus were also killed in the accident. Ca$h was only 23. He was survived by his parents, two siblings, and several extended family members. 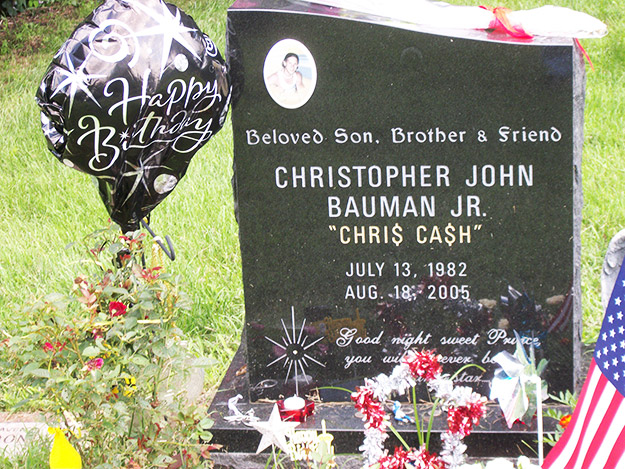 Other pro wrestlers who died in 2005 include Chris Candido, Eddie Guerrero, Lord Alfred Hayes, Rod Trongard, and The Crusher.

What are your favorite memories of Chri$ Ca$h? Let us know in the comments below.