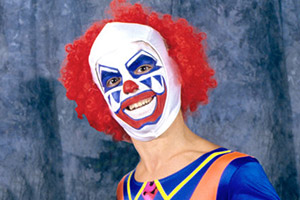 Richard Trogdon, known for his short run in the WWF as Doink the Clown’s dwarf teammate Pink, has passed away after suffering from health issues related to his back. photo: wwe.com

Richard Trogdon may not be a household name in wrestling circles, but Ric, as he was known to friends and family, played a part in a well known storyline during the WWF’s New Generation era.

Pink, along with Dink and Wink, was one of three dwarf wrestlers who accompanied Doink the Clown to the ring in 1994. The group took part in a comedy-driven feud with Jerry “The King” Lawler and his “Royal Family” which consisted of three dwarf sidekicks – Queasy, Sleazy, and Cheesy, respectively. Richard Trogdon’s portrayal of one of Doink’s sidekicks, Pink, culminated at the 1994 Survivor Series.

Dubbed Clowns R’ Us, the quartet consisting of Doink the Clown and his sidekicks Pink, Dink, and Wink, took on The Royal Family.

The Royal Family got the win at Survivor Series, but the celebration was short lived for Lawler.

Not wanting his teammates stealing any of the glory for the victory, The King berated his team, only to have them turn on him. Pink and Wink were hiding under the ring after being eliminated, resulting in six dwarfs chasing Lawler around the ring. Lawler was eventually met in the aisle by Doink, who delivered a pie to his face.

The storyline was used as a comedy spot.

King’s teammate Cheesy passed away in 2017.

It’s important to note that the original (heel) Doink the Clown character was portrayed by Matt Osborne who passed in 2013. The majority of Doink’s face-run (including all of 1994’s programming with Pink) was not played by Osborne, but by Ray Apollo.

Family members have publicly stated that he suffered from “back and body issues” – presumably complications from dwarfism. Richard Trogdon with a family member in an undated photo. photo: myspace.com

Though his health issues were evident prior to getting involved in professional wrestling, Trogdon’s family noted wrestling making his condition worse – no surprise given the bumps that professional wrestlers take night in and night out on the canvas.

The Cauliflower Alley Club notes that Trogdon lived with chronic pain in the final years of his life, undergoing three spinal surgeries.

Ultimately, when contemplating whether to go through with another surgery, Trogdon died from complications stemming from his prior back issues.

Little is known about Trogdon’s life outside the ring. Online sources indicate he left behind at least two children. Information about Trogdon’s wrestling career (outside his run with the WWF in the mid 90s) is also scarce, though his daughter has stated online that he worked under the ring name Mighty Doom prior to signing with the World Wrestling Federation.

According to the Cauliflower Alley Club, Trogdon worked the Northeast independents, carving out a niche as a part timer.

Our condolences to the friends and family of Richard Trogdon.